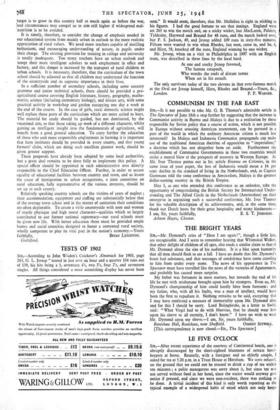 Sm,—Mr. Dymond's cries of " Here I am again!", though a little late, are recognisable. And I seem to remember hearing that Whimsical Walker, that other delight of children of all ages, also made a similar claim to that of Mr. Dymond about the size of his audience. It is a blot upon humanity that all men should flock to see a fall. I have no doubt that Mr. Dymond's boast had substance, and that messages of condolence have come crawling to him from under every stone. The news of his appearance in The Spectator must have travelled like the news of the victories of Agamemnon, and probably has caused more surprise.

My father was fortunate in most matters, but towards the end of his life he met with misfortune brought upon him by strangers. Even so, Mr. Dymond's championship of him could hardly have been foreseen: and my father, who, with all his faults, was a man of intellect, *mild have been the first to repudiate it. Nothing remains to be said, excepting that I may have conferred a measure of immortality upon Mr. Dymond also, and for this I should be sorry. Lord Bolingbroke, in a letter to Swift, said: " What Virgil had to do with Maevius, that he should wear him upon his sleeve to all eternity, I don't know." I have no wish to wear Mr. Dymond upon my sleeve.—I am, Sir, yours faithfully,