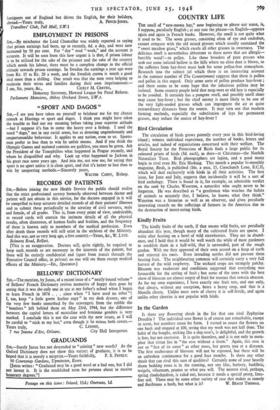 Sta,—By mischance the Lord Chancellor was widely reported as saying that prison earnings had been, up to recently, 6d. a day, and were now increased by 50 per cent. For " day " read " week," and the account is accurate. It will be seen from this how urgent it is that, if prison labour is to be utilised for the sake of the prisoner and the sake of the country which needs his labour, there must be a complete change in the official attitude towards prison earnings. In Sweden the earnings a year ago were from Kr. 15 to Kr. 20 a week, and the Swedish crown is worth a good deal more than a shilling. One result was that the men were helping to maintain their wives and families during their own imprisonment.— I am, Sir, yours, &c., CICELY M. CRAVEN, Honorary Secretary, Howard League for Penal Reform. Parliament Mansions, Abbey Orchard Street, S.W.r.