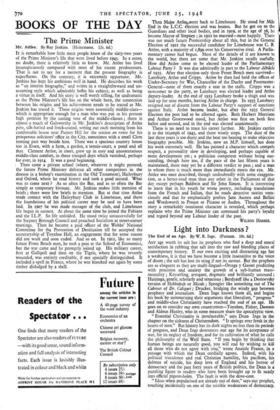 IT is remarkable how little most people know of the sixty-two years of the Prime Minister's life that were lived before 1945. In a sense, no doubt, there is relatively little to know. Mr. Attlee has lived inconspicuously compared with most of his recent predecessors. That is not to say for a moment that the present biography is superfluous. On the contrary, it is extremely opportune. Mr. Jenkins has kept his ambitions well in hand. He 'describes his work as " an interim biography," and writes in a straightforward and un- assuming style which admirably befits his subject, as well as being a virtue in itself. And his story is well worth telling, for undramatic as the Prime Minister's life has on the whole been, the connection between his origins and his achievement needs to be traced as Mr. Jenkins has traced it. Those origins were essentially middle-class— which is appropriate enough for a man who was put in his present high position by the casting vote of the middle-classes ; there is almost a touch of Galsworthy in Mr. Jenkins's description of Attlee pere, silk-hatted and frock-coated, setting out each morning from his comfortable house near Putney Hill for the station en route for his prosperous solicitors' office in the City, sometimes with a small Clem trotting part way beside him. There was a spacious country house too in Essex, with a farm, a garden, a tennis-court, a pond and all that. Clement Attlee, in short, grew up in easy and unostentatious middle-class comfort, in those tranquil days which vanished, perhaps for ever, in 1914. It was a good beginning.

Then came a private school (where, whatever it might portend, the future Prime Minister defeated ;11 other competitors in the diocese in a bishop's examination in the Old Testament), Haileybury and Oxford, where he read history and took a good second. What was to come next ? As so often the Bar, and as so often the Bar simply as temporary bivouac. Mr. Jenkins makes little mention of briefs ; there were few briefs to mention. But at that time Attlee made contact with the Haileybury Club in Limehouse, and there the foundations of his political career may be said to have been laid. In 1907 he was made manager of the club, and Limehouse life began in earnest. At about the same time he joined the Fabians and the I.L.P. So life unfolded. He stood twice unsuccessfully for the Stepney Borough Council and preached Socialism at street-corner meetings. Then he became a paid officer of the Webbs' National Committee for the Prevention of Destitution till he accepted the secretaryship of Toynbee Hall, an engagement that for some reason did not work and soon ended. And so on. In 1912, like so many future Front Bench men, he took a post at the School of Economics, but the war came and he promptly joined up. His military career, first at Gallipoli and then on the Tigris, where he was severely wounded, was entirely creditable, if not specially distinguished. It included a spell in France, where he was knocked out again by some timber dislodged by a shell. Then Major Attlee,,,Nvent back to Limehouse. He stood _for Mile End in the L.C.C. election and was beaten. But he got on to the Guardians and other local bodies, and in 1919, at the age of 36, he became Mayor of Stepney ; in 1922 he married—most happily. There was not much future Premiership about all this, but in the General Election of 1922 the successful candidate for Limehouse was C. R. Attlee, with a majority of 1,899 over his Conservative rival. A Parlia- mentary career had begun. Most of the details of it are known to the world, but there are some that Mr. Jenkins recalls usefully. How did Attlee come to be elected leader of the Parliamentary Labour Party ? It was due admittedly in part to the Labour debacle of 1935. After that election only three Front Bench men survived- Lansbury, Attlee and Cripps. Attlee by then had held the offices of Under-Secretary for War, Chancellor of the Duchy and Postmaster- General—none of them exactly a seat in the stalls. Cripps was a newcomer to the party, so Lansbury was elected leader and Attlee deputy-leader. At the end of 1933 Lansbury broke a thigh and was laid up for nine months, leaving Attlee in charge. In 1935 Lansbury resigned out of dissent from the Labour Party's support. of sanctions against Italy. Attlee became leader, but after the 1935 General Election the post had to be allotted again. Both Herbert Morrison and Arthur Greenwood stood, but Attlee was first on both first ballot and second, and in the end was elected unanimously.

There is no need to trace his career further. Mr. Jenkins carries it to the triumph of 1945, and there wisely stops. The dust of the last three years is too dusty and the heat too heating to make objective biography possible. Mr. Jenkins, now an M.P. himself, has done his work extremely well. He has painted a character which compels respect, a personality slow in developing, and perhaps capable of more development yet ; a politician competent without being out- standing, though here too, if the pace of the last fifteen years is maintained, there may yet be a different verdict to pass • and a man in whom there is much more than immediately meets die eye. Mr. Attlee was once described, though undoubtedly with some exaggera- tion, as a better-read man than any other in the Parliament of that day except perhaps Baldwin and Sir John Simon. It is interesting to learn that in his youth he wrote poetry, including translations from the French and Italian, that he reads detective stories vora- ciously and that he emphatically prefers Jane Austen and Bellini and Wordsworth to Proust or Picasso or Auden. Throughout the story a remarkably consistent character is revealed, which perhaps explains why the Prime Minister can command his party's loyalty and regard beyond any Labour leader of the past.