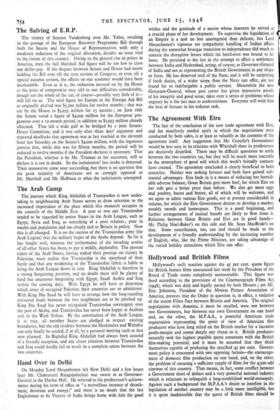 The Salving of E.R.P.

The victory of Senator Vandenberg over Mr. Taber, resulting in the passage of the European Recovery Programme Bill through both the Senate and the House of Representatives with only a moderate reduction of the original allocation, decides an issue vital to the future of this country. Owing to the general rise in prices in America, even the full Marshall Aid figure will be too low to close our dollar-gap. If the dispute between Senate and House had meant holding the Bill over till the next session of Congress, or even till a special autumn session, the effects on our economy would have been incalculable. Even as it is, the reduction insisted on by the House as the price of compromise may add to our difficulties considerably, though not the whole of the cut, of course—possibly very little of it— will fall on us. The total figure for Europe in the Foreign Aid Bill as originally drafted was $5,300 million for twelve months ; that was cut by the House to $5,055 million for 15 months ; on June 16th the Senate voted a figure of $4,000 million for the European pro- gramme over a 12-month period, in addition to $1,055 million already allocated. That left a wide gulf to be bridged by a joint Senate- House Committee, and it was only after three days' argument and repeated deadlocks that agreement was at last reached at the eleventh hour last Saturday on the Senate's $4,000 million, with the ingenious proviso that, while this was for fifteen months, the period will be reduced to twelve months if the President declares it necessary. That the President, whether it be Mr. Truman or his successor, will so declare it is not in doubt. So the isolationists' last stroke is thwarted. Their manoeuvre came near succeeding, but there is no question that the great majority of Americans are as strongly opposed as Mr. Marshall and Mr. Hoffman to what the isolationists attempted.