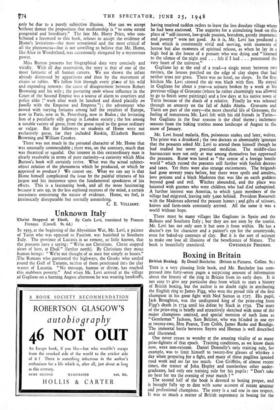 IN 1935, at the beginning of the Abyssinian War, Mr. Levi, a painter of Turin who was opposed to Fascism, was banished to Southern Italy. The province of Lucania is so remote, so little known, that the peasants have a saying : "We're not Christians. Christ stopped short of here, at Eboli " (farther north). By Christians they mean human beings : " We're not thought of as men but simply as beasts." The Romans who garrisoned the highways, the Greeks who settled sound the Gulf of Taranto, neither of them penetrated into the clay wastes of Lucania. "No message, human or divine, has reached this stubborn poverty." And when Mr. Levi arrived at the village of Gagliano on a burning August afternoon he was wearing handcuffs, having received sudden orders to leave the less desolate village where he had been stationed. The auguries for a stimulating book on this . place of " self-interest, low-grade passion, boredom, greedy impotence and poverty " were not good. As it is, Mr. Levi has produced a book which is consistently vivid and moving, with moments of horror but also moments of spiritual release, as when he lay in a high bed in the house of a peasant who was dying and " listened to the silence of the night and . . . felt if I had . . . penetrated the very heart of the universe."

Gagliano lay at the end of a road—a single street between two ravines, the houses perched on the edge of clay slopes that had neither trees nor grass. There was no hotel, no shops. In the first kitchen Mr. Levi entered the air was black with flies. He stayed in Gagliano for about a year—a sojourn broken by a week at his previous village of Grassano (where he rather charmingly was allowed to go to finish some paintings) and a few days at his native town of Turin because of the death of a relative. Finally he was released through an amnesty on the fall of Addis Ababa. Grassano and Turin are part of the story—the more cheerful life of Grassano, the feeling of remoteness Mr. Levi felt with his old friends in Turin— but Gagliano in the four seasons is the chief theme ; inclement seasons from the baking treeless moon landscape of August to the snow of January.

Mr. Levi found malaria, flies, poisonous snakes and later, wolves. The priest was a drunkard ' • the two doctors so abominably ignorant that the peasants asked Mr. Levi to attend them himself though he had studied but never practised medicine. The middle-class bureaucrats were not only at war among themselves but oppressed the peasants. Rome was hated as " the centre of a foreign hostile world " which ruined the peasants still further with foolish decrees and taxes. Yet there were also strange excitements. The brigands had gone seventy years before, but there were spells and amulets, love potions and a black Madonna that was like an earth goddess beyond good and evil. Witches abounded, and the place was haunted with gnomes who were children who had died unbaptised. A further interest was America, to which 5,000 members of the village had migrated, leaving only 5,000 behind. President Roosevelt with the Madonna adorned the peasant homes ; and gifts of scissors, knives and farm-tools constantly arrived. All the same it was a world Without hope.

There must be many villages like Gagliano in Spain and the Balkans and Southern Italy ; but they are not seen by the tourist. Mr. Levi has not only seen it but seen it from within. He has a doctor's eye for character and a painter's eye for the countryside, even for baked-up contours of clay. But it is the sort of account to make one lose all illusions of the beneficence of Nature. The