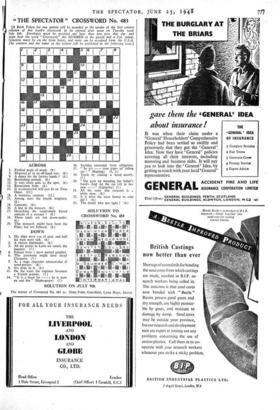 [A Book Token for one guinea will be awarded to the sender of the first correct solution of this week's crossword to be opened after noon on Tuesday week 7446, 6th. Envelopes must be received not later than first post that day and must bear the word " Crossword," the NUMBER of the puzzle and a 21d. stamp. Solutions must be on the form below, and none can be accepted from the U.S.A. The solution and the name of the winner will be published in the following issue.)

6 23. Among stars the fourth brightest.

3. All the points in Latin art satisfy the inquirer. (7.)

4. Extract from a most quoted prophet.