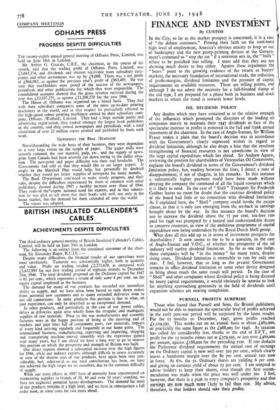 By CUSTOS Iry the City, so far as the market prospect is concerned, it is a case of " the debate continues." Pinning their faith on the continued high level of employment, America's obvious anxiety to keep us out of bankruptcy and the new pump-priming devices at the Govern- ment's command to " stop the rot " if a recession sets in, the " bulls " refuse to be panicked into selling. I must add that they are not showing much desire to buy either. Against these arguments the " bears " point to the growing evidence of the return to buyers' markets, the necessary foundation of international trade, the reduction of profit-margins, dividend limitation and the pressure of capital requirements on available resources. These are telling points, and although I do not admit the necessity for a full-blooded slump of the old type, I am prepared for a phase both in business and stock markets in which the trend is towards lower levels.

Any doubts which may have remained as to the relative strength of the influences which prompted the directors of the leading oil companies merely to maintain their 1947 dividends in face of the spectacular increase in profits is removed in the full and frank annual statements of the chairmen. In the case of Anglo-Iranian, Sir William Fraser makes it plain that the board's decision was in accordance with the Government's clearly expressed wishes in regard to dividend limitation, although he also drops a hint that the resultant strengthening of financial resources is not unwelcome in view of the large capital expenditure which lies ahead. Sir Andrew Agnew, reviewing the position for shareholders of Venezuelan Oil Concessions, explains the board's dividend in terms of the Government's dividend limitation policy, but, reading between the lines, I detect a note of disappointment, if not of chagrin, in his remarks. In this instance .a substantially higher payment could have been made without denying the company the command of all the liquid resources which it is likely to need. In the case of " Shell " Transport Sir Frederick Godber leaves no room for doubt that the cautious dividend policy of the board had little or no connection with dividend limitation. As I explained here, the t` Shell " company could invoke the escape clause, in that it is only just emerging from the set-back in earnings brought about by •the war. In this instance the board's decision not to increase the dividend above the 74 per cent. tax-free rate paid for 1946 was prompted by a natural and understandable desire to conserve resources, in view of the ambitious programme of capital expenditure now being undertaken by the Royal Dutch Shell group.

What does all this add up to in terms of investment prospects for shareholders ? It now seems to me to be a question, in the case of Anglo-Iranian and V.O.C., of whether the prosperity of the oil industry will outlive dividend limitation. So far as one can judge, these companies will be " in the money " for many years, despite rising costs. Dividend limitation is ostensibly to run for only one year. I feel, however, that so long as the present Government remains in office dividend limitation or some other device designed to bring about much the same result will persist. In the case of " Shell " and other companies whose dividend policy is being dictated by heavy capital requirements, it would obviously be unwise to look for anything approaching generosity in the field of dividends until expansion schemes are nearing completion.

Those who feared that Purnell and Sons, the Bristol publishers, would not be able to maintain the spectacular level of profits achieved in the early post-war period will be surprised by the latest results. For the 15 months to December, 1947, gross profits reached £1,229,595. This works out on an annual basis at about £985,000, or practically the same figure as the £988,005 for 1946. As taxation has called for considerably less, thanks to the end of E.P.T., net profit for the 15 months comes out at £579,595, or just over L460,000 per annum, against £i88,000 for the preceding year. If one deducts the Preference dividend requirements the annual rate of earnings on the Ordinary capital is now well over 30o per cent., which clearly leaves a handsome margin over the 8o per cent. annual rate now in force. At 67s. the 5s. Ordinary shares are yielding 6 per cent. and giving an earnings yield of about 25 per cent. I am tempted to advise holders to keep their shares, even though my first recom- mendation was made when the price was well under 20S. I feel, however, that there is a peak in every company's prosperity and that earnings are now much more llely to fall than rise. My advice, therefore, is that holders should take their profits.