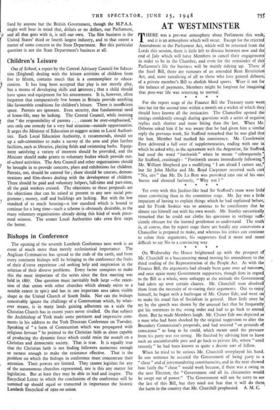 Out of School, a report by the Central Advisory Council for Educa- tion (England) dealing with the leisure activities of children from five to fifteen, contains much that is a commonplace to educa- tionists. It has long been accepted that play is not merely play, but a means of developing skills and interests ; that a child should have space and equipment for his amusements. It is, however, often forgotten that comparatively few homes in Britain provide anything like favourable conditions for children's leisure. There is insufficient space. Parents are ignorant. Even security, that fundamental need of home-life, may be lacking. The Central Council, while insisting that " the responsibility of parents . . . cannot be over-emphasised," sees only one remedy for a very bad situation—outside opportunities. It urges the Minister of Education to suggest action to Local Authori- tiei. Each Local Education Authority, it recommends, should set up a sub-committee to make a survey of the area and plan further facilities, such as libraries, playing fields and swimming baths. Equip- ment satisfying a variety of interests should be provided, and the Minister should make grants to voluntary bodies which provide out- of-school activities. The Arts Council and other organisations should be brought in to provide concerts, plays and exhibitions for children. Parents, too, should be catered for ; there should be courses, demon- strations and film-shows dealing with the development of children. There should be paid and voluntary helpers, full-time and part-time, all the paid workers trained. The objections to these proposals are the objections that can be raised at present to any new social pro- gramme ; money, staff and buildings are lacking. But with the low standard of so much housing—a low standard which is bound to continue for a long time—such a scheme is obviously desirable, as the many voluntary organisations already doing this kind of work piece- meal witness. The sooner Local Authorities take even first steps the better.