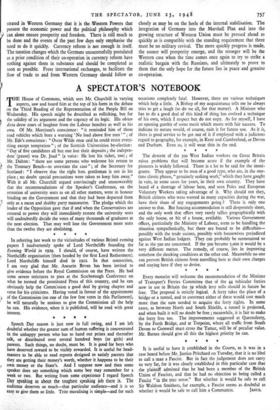 The descent of the 50o West Indian workers on Great

Britain raises problems that will become acute if the example of the pioneers is widely followed. There is a lot to be said for the immi- grants. They appear to be men of a good type, who are, in the one- time classic phrase, "genuinely seeking work," which they havejought in vain, in some cases for years, in their own country. They have heard of a shortage of labour here, and seen Poles and European Voluntary Workers taking advantage of it. Why should not they, British citizens who were wanted in many capacities during the war, have their share of any engagements going ? There is only one answer to that. But housing accommodation is still desperately short, and the only work that offers very rarely tallies geographically with the only house, or bit of a house, available. Various Government offices, particularly the Ministry of Labour, seem to be handling the situation sympathetically, but there are bound to be difficulties— possibly with the trade unions, possibly with housewives prejudiced against West Indian lodgers. They can probably be surmounted so far as the Soo are concerned. If the soo became 5,000 it would be a very different matter. The remedy, of course, lies in improving somehow the shocking conditions at the other end. Meanwhile no one can prevent British citizens from travelling here at their own charges and staying here if they so desire.