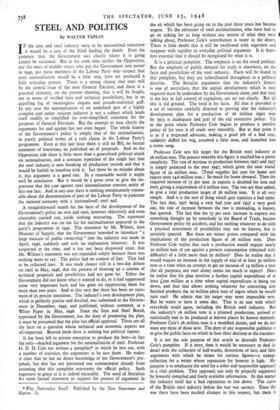 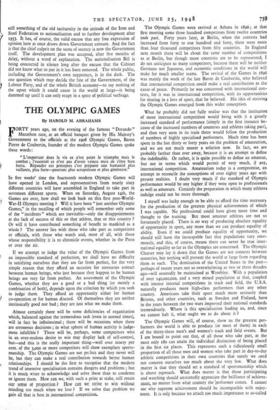 IF the iron and steel industry were to be nationalised tomorrow it would be a case of the blind leading the dumb. Even the pretence that the Government sees clearly where it is going cannot be sustained. But at the same time neither the Opposition, nor the mass of middle voters who put the Government into power in 1945, nor those members of the Labour Party who suspect that steel nationalisation would be a false step, have yet produced a fully articulate protest. There is a strong chance that steel will be the central issue of the next General Election, and there is a practical certainty, on the present showing, that it will be fought, not in terms of verified facts and technical possibilities, but in an appalling fog of meaningless slogans and pseudo-statistical guff. In any case the nationalisation of an undefined part of a highly complex and rather reticent industry is not a subject which lends itself readily to simplified (or over-simplified) treatment for the purposes of General Elections. But the attempt to state clearly the arguments for and against has not even begun. The whole history of the Government's policy is simply that of the rationalisation, in purely political terms, of a rash clause in the Labour Party's programme. Even at this late hour there is still no Bill, no factual statement of intentions, no published set of proposals. And on the Opposition side there is little more than a generalised political attack on nationalisation, and a constant repetition of the single fact that the steel industry is now breaking all production records and that it would be foolish to interfere with it. Let there be no mistake about it, this argument is a good one. In a reasonable world it might well be conclusive. But it would be a gross error to give the im- pression that the case against steel nationalisation consists solely of this one fact. And in any case there is nothing conspicuously reason- able about the determination of part of the Labour Party to puncture the national economy with a (nationalised) steel nail.

A straightforward search for the facts of the development of the Government's policy on iron and steel, however objectively and even charitably carried out, yields nothing reassuring. The statement that the industry was on the list for nationalisation appeared in the party's programme in 1945. The statement by Mr. Wilmot, then Minister of Supply, that the Government intended to introduce " a large measure of public ownership " into the industry was made in April, 1946, suddenly and with no explanation whatever. It was suspected at the time, and it has not been disproved since, that Mr. Wilmot's statement was not expanded simply because there was nothing more to say. The policy had no content of fact. That had to be collected later. It was made clearer still in a two-day debate on steel in May, 1946, that the process of drawing up a scheme of technical proposals and possibilities had not gone far. Either the Government did not know what it wanted to do, or it had suppressed some very important facts and has gone on suppressing them for more than two years. And to this very day there has been no state- ment of its precise intentions. The industry's own development plan, which is perfectly precise and detailed, was submitted to the Govern- ment in December, 1945, and published, without comment, as a White Paper in May, 1946. Since the Iron and Steel Board, appointed by the Government, has the duty of promoting the plan, it must be presumed that the plan has official approval. Those are all the facts on a question whose technical and economic aspects are all-important. Beyond them there is nothing but political vapour.

It has been left to private enterprise to produce the best—in fact the only—detailed argument for the nationalisation of steel. Professor G. D. H. Cole has written a pamphlet* in which he sets out, with a number of statistics, the arguments as he sees them. He makes it clear that he has no direct knowledge of the Government's pro- posals, but that has not prevented one commentator already from assuming that this pamphlet represents the official policy. Such eagerness to grasp at it is indeed excusable. The need of Socialists for some factual statement to support the process of argument in

* Why Nationalise Steel? Published by the New Statesman and Nation. 2s.

the air which has been going on in the past three years has become urgent. To the advocates of steel nationalisation, who have had to go on talking for so long without any notion of what they were I talking about, Professor Cole's contribution is water in the desert. There is little doubt that it will be swallowed with eagerness and reappear with rapidity in everyday political argument. It is there- fore essential that it should be recognised for what it is.

It is a political pamphlet. The emphasis is on the word political. But the emphasis of public demand for truth is elsewhere, on the facts and possibilities of the steel industry. Facts will be found in this pamphlet, but they are subordinated throughout to a political doctrine. The Socialist arguments that the industry's history is one of restriction, that the capital development which is now required must be undertaken by the Government alone, and that steel is the key to full control of capitalism, are set out clearly. But all this is old ground. The need is for facts. All that is provided is a set of statistics carefully directed to proving that the industry's development plan for a production of 16 million ingot tons by 1953 is inadequate and part of the old restrictive policy. Up to the point where Professor Cole begins to produce a positive policy of his own it all reads very smoothly. But at that point it is as if a respected advocate, making a good job of a bad case, suddenly doffed his wig, assumed a false nose, and launched into a comic song.

Professor Cole sets his target for the British steel industry at 26 million tons. The process whereby this figure is reached has a poetic simplicity. The rate of increase in production between 1927 and 1937 is simply projected to the year 1947, which gives the neat round figure of zo million tons. (Total supplies last year for home and export were 14.6 million tons.) So much for home demand. Then the required increase of 75 per cent. in exports is doubled for iron and steel, giving a requirement of 6 million tons. The two are then added, to give a total production target of 26 million tons. It is all very simple. And it is the sort of thing which gets statistics a bad name. The fact that, 1927 being a very bad year and 1937 a very good one, the rate of increase between the two is misleading, is known, but ignored. The fact that the 75 per cent. increase in exports was something thought up by somebody in the Board of Trade, became Government policy by accident, and has nothing whatever to do with a practical assessment of possibilities may not be known, but is certainly ignored. But these are minor points compared with the implications of the production figure of 26 million tons. Does Professor Cole realise that such a production would require nearly So million tons of ore against a present consumption (obtained with difficulty) of a little more than 20 million? Does he realise that it would require an increase in the supply of coal of at least 3o million tons at a time when an attempt to get an increase of 14 million a year (for all purposes, not steel alone) seems too much to expect? Does he realise that his plan involves a further capital expenditure of at least L50o million at a time when capital expenditure is being cut down, and that that allows nothing whatever for converting into finished products the to million extra tons of ingots which he would turn out? He admits that his target may seem impossible now. But he wants to have it some day. That is an aim with which everybody could agree, including the British steel industry. But the industry's 16 million tons is a planned production, arrived at realistically and to be produced at known places by known methods. Professor Cole's 26 million tons is a muddled dream, and we do not want any more of those now. The duty of any responsible publicist is to give the public facts on which to base their decision at the elections.

It is not the sole purpose of this article to discredit Professor Cole's pamphlet. If it were, then it would be necessary to deal in detail with the collection of half-truths, distortions of fact, and false arguments with which he mixes his curious figures—a strange collection for a writer whose reputation for honesty is high. My purpose is to emphasise the need for a sober and responsible approach to a vital problem. That approach can only be properly supported by honestly compiled and freely available information. In this matter the industry itself has a bad reputation to live down. The curse of the British steel industry before the war was secrecy. Since the war there have been marked changes in this respect, but there is

still something of the old taciturnity in the attitude of the Iron and Steel Federation to nationalisation and to further development after 1953. It has, of course, the valid excuse that any free expression of opinion here at once draws down Government censure. And the fact is that the chief culprit on the score of secrecy is now the Government itself. The development plan was accepted, after five months of delay, without a word of explanation. The nationalisation Bill is being concocted in silence long after the excuse that the Cabinet did not know what to put in it has been removed. The whole public, including the Government's own supporters, is in the dark. The one question which may decide the fate of the Government, of the Labour Party, and of the whole British economy—to say nothing of the upset which it could cause in the world at large—is being dammed up until it can only erupt in a spate of political verbiage.