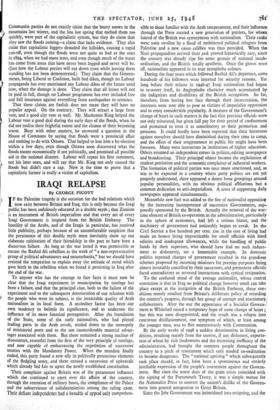 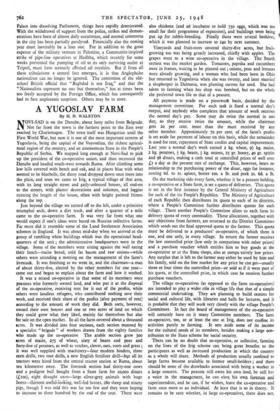 IF the Palestine tragedy is the occasion for the bad relations which now exist between Britain and Iraq, this is only because the Iraqi public has been sedulously educated in a double myth ; that Zionism is an instrument of British imperialism and that every act of every Iraqi Government is inspired from the British Embassy. The hostility of the Arabs, and of the Iraqis in particular, has received little publicity, perhaps because of an uncomfortable suspicion that the persistence of this double myth must inevitably show up our elaborate cultivation of their friendship in the past to have been a disastrous failure. As long as the war lasted it was permissible to excuse the Rashid Ali rebellion as the work of "a non-representative group of political adventurers and mountebanks," but we should have resisted the temptation to explain away the attitude of mind which gave birth to the rebellion when we found it persisting in Iraq after the end of the war.

To anyone who has the courage to face facts it must now be clear that the Iraqi experiment in emancipation by tutelage has been a failure, and that the principal clue, both to the failure of the experiment and to the subsequent deterioration of our relations with the people who were its subject, is the intractable quality of Arab nationalism in its local form. A secondary factor has been our own tendency to belittle its significance, and to underrate the influence of its more fanatical protagonists. After the foundation of the State, some of the early nationalists, who had played leading parts in the Arab revolt, settled down to the monopoly of ministerial posts and to the not inconsiderable material advan- tages associated with them. But there remained a strong nucleus of discontents, resentful from the first of the very principle of tutelage, and now capable of embarrassing the negotiation of successive treaties with the Mandatory Power. When the mandate finally ended, this party found a new ally in politically precocious elements of the fledgling army, and there ensued a succession of upheavals which already bid fair to upset the newly established constitution.

Their complaint against Britain was of the paramount influence

which she continued to exert over the affairs of the country, through the retention of military bases, the compliance of the Palace and the subservience ' of collaborationists among the ruling caste. Their defiant independence had a breadth of appeal only comprehen- sible to those familiar with the Arab temperament, and their Influence, through the Press created a new generation of patriots, for whom, hatred of the British was synonymous with nationalism. Their ranks' were soon swollen by a flood of embittered political refugees from Palestine and a new cause celebre was thus provided. When the Nazi propagandists arrived their task proved fantastically easy, since the country was already ripe for some gesture of national insub- ordination, and the British totally apathetic. Once the gloves were off, nationalism appeared in its true xenophobe colours.

During the four years which followed Rashid Ali's departure, some hundreds of his followers were interned for security reasons. Yet long before their release in 1946-47 Iraqi nationalism had begun to re-assert itself, its Anglophobe character much accentuated by the indignities and disabilities of the British occupation. So far, therefore, from having lost face through their incarceration, the internees were now able to pose as victims of imperialist oppression and to enjoy considerable popularity. A measure of the Government's change of heart in such matters is the fact that previous officials were not only reinstated, but given full pay for their period of confinement and permitted to treat it as contributory to their promotion and pensions. It could hardly have been expected that their bitterness against ourselves should have diminished during their time in camp, and the effect of their reappearance in public life might have been foreseen. Many were instructors in institutions of higher education. Others resumed an independent career in politics, editing newspapers and broadcasting. Their principal object became the exploitation of student patriotism and the economic complaints of industrial workers. The formation of political parties was once more sanctioned, and, as was to be expected in a country where party politics are not yet properly understood, there appeared a dozen loose groupings around popular personalities, with no obvious political affiliations but a common dedication to anti-imperialism. A score of supporting daily newspapers appeared simultaneously.

Meanwhile new fuel was added to the fire of nationalist oppositioq by the increasing incompetence of successive Governments, sup- posedly sponsored by the British. Actually the removal of the war- time element of British co-operation in the administration, particularly in the sphere of economics, had left a serious hiatus, and the machinery of government had noticeably begun to creak. In the Civil Service a five hundred per cent. rise in the cost of living had made an honest living impracticable for small officials with fixed salaries and inadequate allowances, while the handling of public funds by their superiors, who should have had no such induce- ment to dishonesty, set a lamentable example. In domestic politics repeated changes of government resulted in the grandiose schemes proposed by incoming ministers for prestige purposes being almost invariably cancelled by their successors, and permanent officials faced contradictory or reversed instructions with cynical resignation.

To the confused mind of the average nationalist, whose central conviction is that in Iraq no political change however small can take place except at the instigation of the British Embassy, these con- ditions merely resulted from Britain's deliberate policy of retarding the country's progress, through her group of corrupt and reactionary' collaborators. After the war the appearance of a Socialist Govern-! ment at Whitehall raised a temporary hope of some change of heart ;$ but this was soon disappointed, and the result was a relapse into rancorous disillusionment, one symptom of which, at least among the younger men, was to flirt ostentatiously with Communism.

By the early weeks of 1948 a sudden deterioration in living con- ditions, resulting mainly from the unwise, if not dishonest, exporta- tion of wheat by rich landowners and the increasing inefficacy of the administration, had brought the common people throughout the country to a pitch of resentment which only needed co-ordination to become dangerous. The "national uprising" which subsequently took place should, in fact, have been a spontaneous and entirely justifiable expression of the people's resentment against the Govern- ment. But since the worst days of the grain crisis coincided with the signing of the Portsmouth Treaty, it was a simple matter for the Nationalist Press to convert the nation's dislike of the Govern.‘ ment into general antagonism to Great Britain.

Since the Jabr Government was intimidated into resigning, and the Palace into dissolving Parliament, things have rapidly deteriorated. With the withdrawal of support from the police, strikes and demon- strations have been of almost daily occurrence, and normal commerce in the city has been partially paralysed. Financially also the coming year must inevitably be a lean one. For in addition to the great expense of the military venture in Palestine, a Communist-inspired strike of pipe-line operatives at Haditha, which recently for some weeks prevented the pumping of oil to its only surviving outlet at Tripoli, must have seriously affected oil royalties. But if from all these tribulations a central fact emerges, it is that Anglophobe nationalism can no longer be ignored. The contention of the old- school British official that "Baghdad is not Iraq," and that the "Nationalists represent no onz. but themselves," has at times been too freely accepted by the Foreign Office, which has consequently had to face unpleasant surprises. Others may be in store.