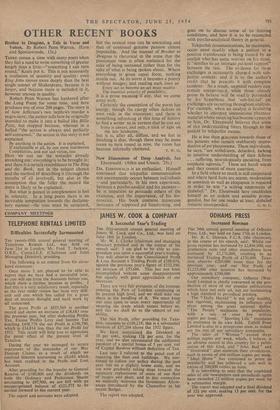 25s.) DR. EFIRENWALD is an enthusiast. Himself convinced that telepathic communication not uncommonly occurs between individuals —and particularly, in his own experience, between a psycho-analyst and his patients— he is impatient to persuade others of the existence, and the importance, of his dis- coveries. His book contains numerous instances of supposed psi functioning, and goes on to discuss some of its limiting conditions, and how it is to be reconciled with psycho-analytical theory in general.

Telepathic communications, he maintains, occur most readily when a patient in a positive transference is being treated by an analyst who has some worries on 11.s mind. It "testifies to an intimate psi-level rapport" between the two. The evidence for these exchanges is necessarily charged with sub- jective content: and it is to the author's credit that he presents it with complete candour. As a result, sceptical readers may remain unconvinced, while those already prone to believe will be read ly persuaded by hypothesis that 'sub-lint:nal' psi exchanges are occurring throughout analysis. For example, when an analyst is hesitating whether to interpret unconscious phantasy material whose meaning has become v.pparent to him, Dr. Ehrenwald believes that some of this understanding filters through to the patient by telepathic means.

He is less than generous towards those of his patients who remain stubbornly unpro- ductive of psi phenomena. These individuals, he says, "are withdrawn, detached, lacking in intuitive understanding of their fellows . . . suffering, neurologically speaking, from emphatic agnosia." '1 hese are harsh words and they consist of mere assertion.

In a field where so much is still conjectural and where hard facts arc scarce, moderation in assertion as well as eloquence is required in order to win "a willing suspension of disbelief." Dr. Ehrenwald here establishes himself as an ardent and amiable propa- gandist, but for one reader at least, disbelief remains unsuspended. G. M. C.