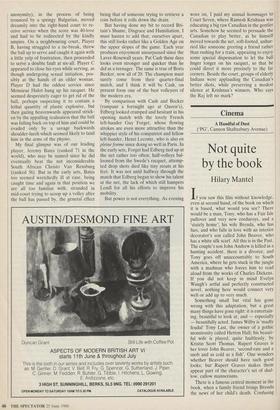 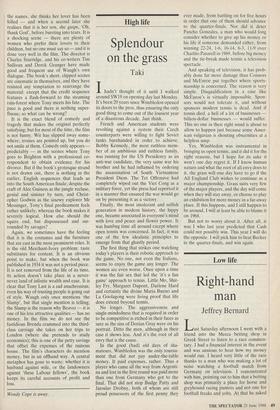 Not quite by the book

If you saw this film without knowledge, even at second hand, of the book on which it is based, what would you see? There would be a man, Tony, who has a Fair Isle pullover and very new corduroys, and a `stately home'; his wife Brenda, who has furs, and who falls in love with an interior decorator's son called John Beaver, who has a white silk scarf. All this is in the Past. The couple's son John Andrew is killed in a hunting accident, there is a divorce, and Tony goes off unaccountably to South America, where he gets stuck in the jungle with a madman who forces him to read aloud from the works of Charles Dickens. If you did not keep in mind Evelyn Waugh's artful and perfectly constructed novel, nothing here would connect very well or add up to very much.

Something small but vital has gone wrong with this adaptation, but a great many things have gone right: it is entertain- ing, beautiful to look at, and — especially — beautifully acted. James Wilby is 'madly feudal' Tony Last, the owner of a gothic monstrosity called Hetton Hall; his beauti- ful wife is played, quite faultlessly, by Kristin Scott Thomas. Rupert Graves is her lover John Beaver, 'second-rate and a snob and as cold as a fish'. One wonders whether Beaver should have such good looks; but Rupert Graves makes them appear part of the character's set of shal- low, callow mannerisms.

There is a famous central moment in the book, when a family friend brings Brenda the news of her child's death. Confusing the names, she thinks her lover has been killed — and when a second later she realises that it is her son, she gasps, 'Oh, thank God', before bursting into tears. It is a shocking scene — there are plenty of women who prefer their lovers to their children, but no one must say so — and it is done very well in the film. The director is Charles Sturridge, and his co-writers Tim Sullivan and Derek Granger have made good and frequent use of Waugh's own dialogue. The book's short, clipped scenes are cinematic in themselves, and they have resisted any temptation to rearrange the material: except that the credit sequence features a flash-forward to the steaming rain-forest where Tony meets his fate. The pace is good and there is nothing super- fluous; so what can be wrong?

It is the exact blend of comedy and tragedy that makes the original perfectly satisfying; but for most of the time, the film is not funny. Wit has slipped away some- where; ironies are pointed up, but you do not smile at them. Comedy only appears— predictably — in the scenes where Tony goes to Brighton with a professional co- respondent to obtain evidence for his divorce. But if the book's grotesque strand is not drawn out, there is nothing in the earlier, English sequences that leads us into the South American finale; despite the craft of Alec Guiness as the jungle recluse, genial and sinister by turn, and Christ- opher Godwin as the sinewy explorer Mr Messinger, Tony's final predicament feels rather unlikely; whereas the book makes it severely logical. How else should the squire end, but dispossessed and sur- rounded by savages?

Again, we sometimes have the feeling that it is the costumes and the furniture that are cast in the most prominent roles. It is the old Merchant-Ivory problem: taste substitutes for content. It is an obvious point to make, but when the book was published in 1934 it was not a period piece. It is not removed from the life of its time, its action doesn't take place in a never- never land of infinite wealth and ease. It is clear that Tony Last is a sad anachronism; even his way of trusting people is going out of style. Waugh only once mentions 'the Slump', but that single mention is telling; the Slump is the reason why Beaver — it is one of his less attractive qualities — has no money. In the film we do not see the fastidious Brenda crammed into the third- class carriage she takes on her trips to London (where she pretends to study economics); this is one of the petty savings that offset the expenses of the ruinous house. The film's characters do mention money, but in an offhand way. A central metaphor has gone to waste: whether it is husband against wife, or the landowners against 'these Labour fellows', the book keeps its careful accounts of profit and loss.

Wendy Cope is away.