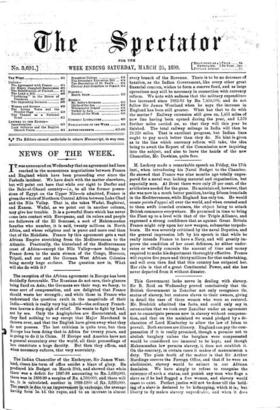 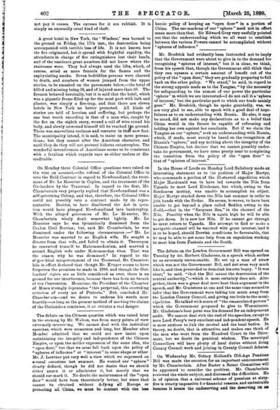 This Government lacks nerve in dealing with slavery. Sir R.

Reid on Wednesday proved conclusively that the , British Government in Zanzibar not only recognises the. status of slavery, but restores slaves to their owners, giving in detail the case of three women who were so restored. Mr. Brodrick admitted the facts, and could only say. in extenuation that we took over Zanzibar under an agreement not to emancipate persons now in slavery without compensa- tion, and that on the mainland we stand pledged by a de- claration of Lord Kimberley to allow the law of Islam to prevail. Both excuses are illusory. England can pay the com- pensation if it is really promised, though a promise not to abolish burglary unless the burglars were compensated would be considered too immoral to be kept; and though Mahomniedan law permits slavery, it does not establish it. On the contrary, in certain cases it makes of manumission a duty. The plain truth of the matter is that Sir Arthur Harding& coerces the Foreign Office, and that if he were an abolitionist, slavery would be extinct in our African ' dominion. We have simply to refuse to recognise the existence of. each a status, and punish any man who flogs a slave as if he had flogged a free woman, and slavery would cease to exist. Perfect justice will not be done-till the hold- ing of a slave is declared to be kidnapping, which it is; but liberty to fly makes slavery unprofitable, and when it does

not pay it ceases. The excuses for it are rubbish. It is simply an unusually cruel kind of theft.