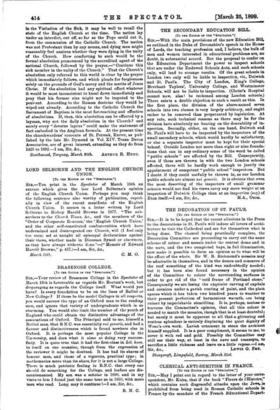 [To THE EDITOR 01 TE2 " lipzersava."1 SIE,—With the main provisions of the new Education Bill, as outlined in the Duke of Devonshire's speech in the House of Lords, the teaching profession and, I believe, the bulk of men and women interested in educational problems are, no doubt, in substantial accord. But the proposal to confer on the Education Department the power to inspect schools that are under the Endowed Schools Acts, and such schools only, will lead to strange results. Of the great schools in London two only will be liable to inspection, viz., Dulwich and St. Paul's. The City of London, King's College, Merchant Taylors', University College, and Westminster Schools, will not be liable to inspection. (Christ's Hospital cannot now, alas ! be reckoned among London schools.) There exists a double objection to such a result as this. In the first place, the division of the above-named seven schools into two classes is very largely arbitrary, and ought rather to be removed than perpetuated by legislation. At any rate, such technical reasons as there may be for the division have absolutely no bearing on the desirability of in- spection. Secondly, either, on the one hand, Dulwich and St. Paul's will have to be inspected by the inspectors of the small secondary schools, which would hardly be satisfactory, or else a separate inspector must be kept for their special behoof. Outside London not more than eight or nine founda-- tions that can in any ordinary sense of the word be called "public schools" are affected by the Bill. Consequently, even if these are thrown in with the two London schools affected, there will be hardly work enough to justify the appointment of competent " public school " inspectors. But I doubt if they could usefully be thrown in, as our London public schools are almost sui generis. It is obvious that even the most deserving of the inspectors of small grammar schools would not find his views carry any more weigbt at an inspection of Dulwich College than at an inspection (say) of