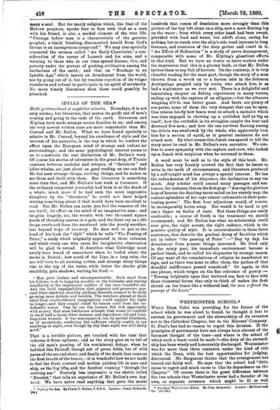 it is not only science, but literature, that makes its profit out of men's coming and going to the ends of the earth. Stevenson and Kipling have made strange scenes familiar to us ; and among the very newest writers none are more remarkable than Mr. Conrad and Mr. Bullen. What we have found specially to admire in Mr. Conrad, beyond his excellence of style and the interest of his narrative, is the way in which he renders the effect upon the European mind of strange and unfami iar surroundings ; and the same psychological interest seems to us to constitute the real distinction of Mr. Bullen's work. Of course his stories of adventure in the great deep, of Titanic combats between cachalot and octopus, of "threshers " and killer-whales, are just about as good reading as one can find. He has seen strange things, exciting things, and he makes us See them and thrill with them. But literature is something more than that, and Mr. Bullen's beet work is literature. If the ordinary competent journalist had been in at the death of a whale, much more if he had seen the more impressive slaughter by the "threshers," he could not have helped writing something about it that would have been excellent to read. But Mr. Bullen can make you feel the romance of the

sea itself ; its effect on the mind of an imaginative man ; and its grim tragedy, too, the wrestle with two thousand square yards of thrashing canvas in a gale, and the faint cry as a life

drops overboard from the masthead into the yeasty smother, lost beyond hope of recovery. He does well to put at the head of his book the "idyll" which he calls "The Passing of Peter," a study which originally appeared in these columns, and which every one who cares for imaginative observation will be glad to reread. It describes what Coleridge must surely have heard of somewhere when he loafed about the docks in Bristol ; how south of the Line, in a long calm, the sea will turn to all seeming rotten, and strange shiny things rise to the top of the water, while below the sharks glide stealthily, pale shadows, waiting for food:-

" Men grew listless and uncompanionable. Each aloof from his fellows, took to hanging moodily on the bulwarks and staring steadfastly at the unpleasant surface of the once beautiful sea. And the livid impalpabilities that, crigantic and gruesome, pur- sued their shadowy, stealthy glidings'beneath, seemed to be daily growing more definite and terrible. The watchers glared at them until their overburthened imaginations could support the sight no longer, and they sought relief by hoarse cries from the un- definable terror. One by one the seamen fell sick, apparently with scurvy, that most loathsome ailment, that seems to combine in itself half-a-dozen other diseases, and reproduces old and long- forgotten wounds. It was aceompanied, too, by partial blindness, as of moonstroke, rendering the sufferers utterly unable to see anything at night, even though by day their sight was still fairly good."

That is a terrible picture, yet touched with the tone that redeems it from ugliness; and as the story goes on to tell of the old man's passing, of his reminiscent dotage, when he babbled like Falstaff, though not of green fields, but of wild yarns of the sea and shore, and finally of the death that came on the first breath of the breeze,—it is wonderful how we are made to feel the fresh current and motion quicken life in man and ship, as the fog' lifts, and the forefoot running "through the reviving sea." Scarcely less impressive is the sketch called "Derelict," that tells an experience of Mr. Bullen's own hoy.

hood. We have never read anything that gave the moral

lassitude that comes of desolation more strongly than -this picture of the boy left alone on a ship, now a mere floating log on the water ; from which every other hand had been swept, provided with food and water, but adrift alone, caring for nothing but to watch over the ship's side weed increase in long festoons, and creatures of the deep gather and crawl in it. " An Effect of Refraction " is a study of nerve derangement, comparable with some of Mr. Kipling's ghastliest efforts in that kind. Bat we have no desire to leave readers under the impression that this is a gloomy book, or that Mr. Bullen invitee them to sup full of horrors. On the contrary, it is very cheerful reading for the most part, though the story of a man thrown from a wreck on to a barren islet in the Solomon Archipelago peopled only by crabs, who attack him, is as bad a nightmare as we ever met. There is a delightful and tantalising chapter on fishing experiences in many waters, ending up with the capture of an alligator,—bat the albacore weighing 470 lb. was better game. And there are plenty of sea-yarns, some of them the very steepest that can be spun. One relates briefly how boats went to attack a cachalot which was then engaged in chewing up a cuttlefish half as big as itself ; how the cuttlefish in its struggles caught the boat and drowned five men ; and how the one survivor floating among the debris was swallowed by the whale, who apparently took him for a section of squid, as in general cachalots do not attack men. By what means this Jonah was spared to tell the story must be read in Mr. Ballen's own narrative. We con- fess to some sympathy with the captain and crew, who looked upon Jonah with suspicion when he returned to them.

A word must be said as to the style of this book. Mr. Bullen has very frankly avowed the fact that he learnt to write in the teeth of circumstances, and literature produced by a self-taught mind has always a special interest. He has the redundancies of his eloquence, the inclination to say too much. Any scholar could amend many passages and sen- tences; for instance, this on the first page : "Among the glorious host of heaven the dazzling moon sailed on her stately way, the radiant splendour of her rays almost unbearable in their pene- trating power." The first four adjectives would, of course, be incomparably better away. Nor would it be bard to put one's finger on faults of taste. But these things are easily eradicable ; a course of Swift is the treatment we should recommend; and Mr. Bullen has what no scholarship could ever give, the right accent, the right cadence, which is the positive quality of style. It is unmistakeable in these three sentences, that describe the gradual decay of faculties which set in before " the passing of Peter" :—" Day by day, his detachment from present things increased. He lived only in the misty past, his immediate environment became a perfect blank, and he called his shipmates by strange names. Of any want of the consolations of religion he manifested no sign, and as there was none to offer them, the pathos of that dreadful indifference passed unnoticed." Or again, in this one phrase, which verges on the fine reticence of poetry :— " Tossing helplessly upon that tortured sea, face to face with those elemental forces that only to think of makes the flesh shrink on the bones like a withered leaf, the men suffered the passage of the hours."