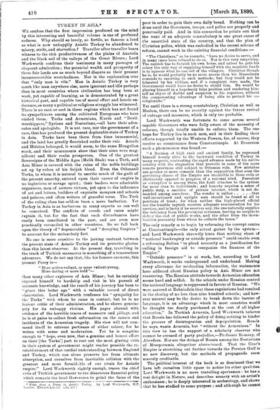 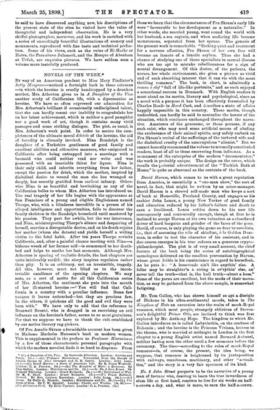 TURKEY IN ASIA.* WE confess that the first impression produced

on the mind by this interesting and beautiful volume is one of profound sadness. Why should so lovely, so fertile, so famous a land as what is now unhappily Asiatic Turkey be abandoned to

misery, strife, and starvation P Traveller after traveller bears witness to the rich productiveness of the plains of Anatolia and the black soil of the valleys of the Great Rivers ; Lord Warkworth confirms their testimony in many passages of eloquent admiration ; the potential wealth and prosperity of these fair lands are as much beyond dispute as their present incontrovertible wretchedness. Nor is the explanation true that "only man is vile." Man in Asiatic Turkey is very much like man anywhere else, more ignorant and idle perhaps than in most countries where civilisation has long been at work, yet capable of learning, as is demonstrated by a great historical past, and capable too of moral effort and heroic en- darance, as many a political or religions struggle has witnessed. There is no race or sect in these regions which has not found its sympathisers among the cultivated Europeans who have visited them. Turks and Armenians, Kurds and "Devil- worshippers," Syrians and Nestorians,—all have their advo- cates and apologists. It is not race, nor the government of a race, that has produced the present deplorable state of Turkey in Asia. Turks have been there from time immemorial, and the land has greatly flourished under their rule. Accads and Hittites belonged, it would seem, to the same Mongolian stock, and their monuments show that their aims were mag- nificent and their realm prosperous. One of the greatest Sovereigns of the Middle Ages (Melik Shah) was a Turk, and Asia Minor is covered with the ruins of the noble buildings set up by rulers of his Seljuk blood. Even the Othmanli Turks, to whom it is natural to ascribe much of the guilt of the present anarchy, entered upon their career of empire in no inglorious or savage spirit ; their leaders were admirable organisers, men of austere virtues, yet open to the influences of art and letters, builders of exquisite mosques and schools and palaces, and often writers of graceful verse. The Turk of the ruling class has seldom been a mere barbarian. Yet Turkey in Asia is as barbarous in many aspects as can well be conceived. The conflicts of creeds and races might explain it, but for the fact that such disturbances have easily been conciliated in the past, and are even now practically reconciled in other countries. So we fall back upon the theory of " degeneration " and " decaying Empires " to account for the melancholy fact.

No one is more sensitive to the jarring contrast between the present state of Asiatic Turkey and its preterite glories than this latest observer. At the present day, travelling in the track of Turkish massacres is something of a temerarious adventure. We do not say that, like his famous ancestor, this present Percy is- " More active-valiant, or more valiant-young, More daring or more bold "-

than many other explorers of Asia Minor; but he certainly exposed himself to hardship and risk in his pursuit of accurate knowledge, and the result of his journey has been to grace this latter age " with a valuable record of direct observation. Lord Warkworth confesses his " sympathy for the Turks" with whom he came in contact, but he is no lenient critic of their administration, and he shows genuine pity for its unhappy victims. His pages abound with evidence of the horrible traces of massacre and pillage, and he is at pains to collect fresh information on the causes and incidents of the Armenian tragedy. His view will not com- mend itself to extreme partisans of either colour, for he writes with sense and moderation. Yet he is sanguine enough to " hope, even now, that a genuine and honest effort on their [the Turks') part to root out the moat glaring evils in their system of government might render possible the re- establishment of that cordial understanding between England and Turkey, which can alone preserve her from ultimate absorption, and ourselves from inevitable collision with the greatest and most formidable of our rivals for Asiatic empire." Lord Warkworth rightly enough, traces the chief evils of Turkish government to the disastrous financial policy which compels the local Governors to grind the faces of the

poor in order to gain their own daily bread. Nothing can be done until the Governors, troops, and police are properly and punctually paid. And in this connection he points out that the want of an adequate constabulary is one great cause of the unsettled state of the country, and that the plan of Christian police, which was embodied in the recent scheme of reform, cannot work in the existing financial conditions :—

" The Christians," as he remarks, "have no desire to serve, and in many cases have refused to do so. Nor is this very surprising. The zaptieh has to furnish his own horse, and unless he gets his salary the only way of supplying himself with the requisite funds is to squeeze what he can out of the villagers. Christian though he is, he would probably be no more averse than his Mussulman comrade to resorting to such methods; but they would not be tolerated by his victims, and if a complaint were made, the Government would have no desire to shield him. He would be placing himself in a hopelessly false position and rendering him- self an object of dislike and suspicion to his superiors, without the compensating advantage of being able to protect his co- religionists."

Yet until there is a strong constabulary, Christian as well as Moslem, there can be no security against the future revival of outrage and massacre, which is only too probable.

Lord Warkworth was fortunate to come across several capable Governors who were fully aware of the necessity of reforms, though totally unable to enforce them. The one hope for Turkey lies in such men, and in their finding their efforts supported by the Western Powers, for, of course, they receive no countenance from Constantinople,. At Erzeronm such a phenomenon was found :-

"A Bosnian of high rank and ancient family, he expressed himself keenly alive to the backward condition of Turkey in many respects, contrasting the rapid advance made by his native country with the stagnation that prevails in some of the more remote provinces still subject to Ottoman rule. Few mistakes are greater or more common than the supposition that even the governing classes of the Empire are insensible to these evils or obstinately opposed to progress of a rational kind. Prevalent RA corruption is among them, the fault attaches to the system far more than to individuals ; and honesty requires a sense of public duty, a sacrifice of private interest, which is not de- manded among ourselves. The wonder is rather . . . . . that well-intentioned and upright men should be found at all in positions of trust ; for when neither the high-placed official nor the humble zaptieh receives adequate remuneration for his services, and is lucky if he receives any, the one naturally supplies the deficiency from the provincial revenues, leaving no surplus to defray the cost of public works, and the other from the down- trodden peasantry from whom he collects the taxes."

The only remedy is to begin by reforming the corrupt centre

at Constantinople—the only actual gainer by the system— and Lord Warkworth shrewdly hints that nothing short of "national bankruptcy or outside pressure" could enable even a reforming Sultan " to plead necessity as a justification for calling in foreign aid to reorganise the finances of the Empire."

" Outside pressure " is at work, but, according to Lord Warkworth, it works underground and underhand. Making every allowance for misleading information, the statements here adduced about Russian policy in Asia Minor are not reassuring. The Russian attitude towards Armenian education seems hard and selfish. In the schools under Russian control the national language is suppressed in favour of Russian. " We

were assured at Echniadzin that these regulations bad resulted in the closing of no less than nine hundred schools ; and how- ever natural may be the desire to break down the barrier of language, it is an advantage which in most countries would

be thought too dearly purchased at the cost of all higher education." In Turkish Armenia, Lord Warkworth believes that Russia has followed the policy of doing nothing to hinder the process of disintegration and depopulation. Russia he says, wants Armenia, but " without the Armenians." In this view he has the support of a scholarly observer who cannot be accused of party prejudice,—Professor Ramsay, of

Aberdeen. Nor are the doings of Russia among the Nestorians of Mesopotamia altogether above-board. That the Czar's Empire is stretching out further towards the Persian Gulf is

no new discovery, but the methods of propaganda seem scarcely creditable.

The political interest of the book is so dominant that we have left ourselves little spaee to notice its other qualities. Lord Warkworth is no mere travelling sportsman : he has a real delight in Nature, and describes scenery with an artist's

enthusiasm ; he is deeply interested in archaeology, and shows that he has studied to some purpose ; and although he cannot be said to have discovered anything new, his descriptions of the present state of the sites he visited have the value of thoughtful and independent observation. He is a very skilful photographer, moreover, and his work is enriched with a series of exceedingly beautiful illustrations of scenery and monuments, reproduced with fine taste and technical perfec- tion. Some of his views, such as the ruins of El-Hathr or Hatra, the Pass above Julamerk, and the Mosque of Abraham at Urfah, are exquisite pictures. We have seldom seen a volume more tastefully produced.