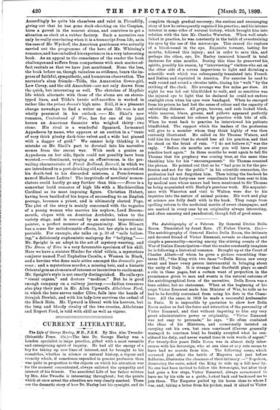 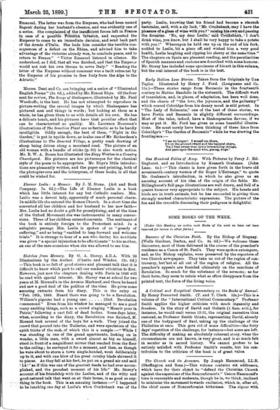 The Autobio . graphy of a Veteran. By General Enrico Della

Rocca. Transtated by Janet Ross. (T. Fisher -17nwin. 21e.)— The autobiography of General Enrico Della Rocca, the intimate and devoted friend of Victor Emanuel, reveals so charming and simple a personality—moving among the.-stirring events of the War of Italian Emancipation—that the reader constantly imagines he is following a historical romance. Brought up at the Court of Charles Albert—of whom he gives a picture resembling Gus- tavus III., "the King with two faces "—Della Rocca saw every event and knew every person instrumental in bringing about the unity of Italy. It is strange that Garibaldi plays so small a role in these pages, but a certain want of proportion, in the prominence given to men and events is the natural outconie of the autobiographical form of the narrative. Della Rocca was a born soldier, but no statesman. When 'at the beginning of his reign Victor Emanuel made him Minister of War, he tells us he had to be forcibly restrained from using his fists in the Cham- bers. All the same, in 1859 he made a successful Ambassador in Paris. It is impossible by quotation to show how Della Rocca makes ns feel the force and attraction of the personality of Victor Emanuel, and that without imputing to him any very great administrative power or originality. " Victor Emanuel was not easy to persuade," he says. "He often combated the ideas of his Ministers, and occasionally insisted on tarrying out his own, but ones convinced (Cavour generally managed to convince him) he frankly accepted what he con- sidered his duty, and never wasted time in vain words of regret." For twenty-five years Della Rocca was in almost daily inter- course with his Sovereign, who at one time at soy rate seems to have had no secrets from him. The following scene; which occurred just, after the battle of Magenta and just before Solferino, illustrates the closeness of their intimacy : —"'Napoleon, dismissing the suite, asked the . Sing to ride up.-a hill nearby.. No one-had been invited to f011oiv the. Sovereigns, bue-after.they hid -gone a few steps, Victor. Emanuel, always accustomed - to have me by his side as a guide, looked beck and beckcined me to join them. The- Emperor pulled :up his horse close to where I was, and, taking a letter from his 'pocket, read it' altind to. Victor

• • • Emanuel. The letter was from the Empress, who had been named Regent-during her husband's absence, and was evidently one of a series. She complained of the insufficient forces left in France in case of a possible Pritssinn invasion, and requested the . Emperor to come to an immediate decision, and send back part of the Arm6e d'Italie. She bade him consider the terrible con- - sequences of a defeat on the Rhine, and advised him to take advantage of the victories already won, to conclude peace, and to return to France." " Victor Emanuel listened in silence. He understood, as I did, that all was finished, and that the Emperor would not risk his own throne to serve Italy." " Reading the letter of the Empress without comment was a tacit retractat by the Emperor of his promise to free Italy from the Alps to the • Adriatic."