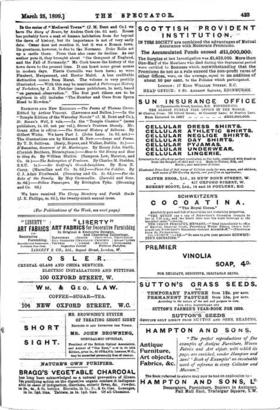 Dent and Co.) we liave The Story of Rouen; by Andrea Cook (4s. 6d. net). Rouen has probably been a seat of human habitation from far beyond the dawn of history, but its importance is not of very early date. Caesar does not mention it, but it was a Roman town. Its greatness, however, is due to the Normans. Duke Rollo set up a castle there.-- From then also came its decline. As our author puts it, they brought about "the Conquest of England, and the Fall of Normandy." Mr. Cook traces the history of the town down to the present. time. It can boast some great names in modern days. Pierre Corneille was born here ; so were Flaubert, Maupassant, and Hector Malot. A lees criditable distinction comes from Mara. The volume is very prettily illustrated.—With this may be mentioned A Picturesque History of Yorkshire, by S. S. Fletcher (same publishers, Is. net), based " on -personal-observation." The Era part (there-. are to be eighteen in ail) includes "The Humber and Ouse from Spurn Head to Howden."