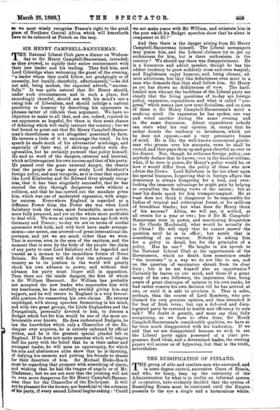 THE National Liberal Club gave a dinner on Wednes- day to Sir Henry Campbell-Bannerman, intended, as they avowed, to signify their entire contentment with their new leader and his leading. They find him, said Lord Coleridge when welcoming the guest of the evening, "a leader whom they could follow, not grudgingly or of necessity, but loyally, cheerfully, affectionately,"—he did not add, being modest, the expected adverb, " success- fully." It was quite natural that Sir Henry should, under such circumstances and in such a place, feel exceedingly cheerful, should see with his mind's eye a rising tide of Liberalism, and should indulge a natural proclivity to humour by describing his opponents in phrases rather of ridicule than argument. We have no objection to make to all that, and are, indeed, rejoiced to see opponents so hopeful, for there is then some chance of debating which will really instruct the country ; but we feel bound to point out that Sir Henry Campbell-Banner- man's cheerfulness is not altogether generated by facts. He invents a little of it to encourage the timid. In his speech he made much of his adversaries' misdoings, and especially of their way of shirking conflict with dis- agreeables, but he certainly pursued that policy himself. He said no word of the dangers, external and internal, which militate against his own success and that of his party. He passed over the great external danger, the chance that the people at large may study Lord Salisbury's foreign policy, and may recognise, as it is clear that experts like Lord Kimberley and Sir Edward Grey already recog- nise, that it has been singularly successful, that he has steered the ship through dangerous reefs without a collision, and that he has carried out the mandate given him, which was one of moderated expansion, with singu- lar success. Everywhere England is regarded as a different Power from the Power she was when Lord Salisbury took the reins, more formidable, more active, more fully prepared, and yet on the whole more profitable to deal with. We were at enmity two years ago both with Germany and France ; to-day we are on terms of cordial agreement with both, and with both have made arrange- ments—one secret, one avowed—of great international im- portance, and yet we are much richer than we were. That is success, even in the eyes of the captious, and the moment that is seen by the body of the people the claim of any party to oust Lord Salisbury will be regarded and treated as a menace to the immediate future of Great Britain. Sir Henry will find that the advance of the country as to its position in the world will greatly check his own advance to power, and without that advance bis party must linger still in opposition. Then tbere are the inside dangers, the first of which is Sir William Harcourt. Sir William has probably not accepted the new leader who supersedes him with any heartiness, he has carefully avoided giving him any support, and he will return to England in a very favour- able position for reasserting his own claims. He returns unpledged, with strong speeches fermenting in his mind, and with two great groups, the Little Englanders and the Evangelicals, personally devoted to him, to discuss a Budget which but for him would be one of the most un- favourable ever known. He does understand Budgets, he has the knowledge which only a Chancellor of the Ex- chequer ever acquires, he is entirely unbound by official witbes, and he is the greatest special pleader left in England. If he does not make speeches which will inspire half his party with the belief that he is their safest and strongest leader, he will miss an opportunity, for which his acts and abstinences alike show that he is thirsting, of defying his enemies and putting his friends to shame for their desertion of him. Sir Michael Hicks-Beach must be regarding that prospect with something of alarm, and wishing that he had the tongue of angels or of Mr. Gladstone; but we are not sure that the jousting will not be even more dangerous for Sir Henry Campbell-Banner- man than for the Chancellor of the.Exchequer. It will not be pleasant for the former, nor beneficial to the cohesion of his party, if every second Liberal begins asking : ' Could we not make peace with Sir William, and-rehistate 'him in the post which his Budget speeches show that he alone is competent to fill ? '

And then there is the danger arising from Sir Henry Campbell-Bannerman himself. The Liberal newspapers may praise him, and the Liberal clubmen try to get up enthusiasm for him, but is there enthusiasm in the country ? We should say there was disappointment. He is a humorous and adroit speaker, though he has the oddest tendency to grow suddenly cross and even waspish, and Englishmen enjoy humour, and, being clumsy, ad- mire adroitness, but they like definiteness even more in a man who demands that they shall follow him. Sir Henry as yet has shown no definiteness of view. The hard- headed men who are the backbone of the Liberal party see clearly that the living questions of to-day are foreign policy, expansion, expenditure, and what is called " pro- gress," which means just now semi-Socialism, and on none of these is Sir Henry Campbell-Barnerman's mind a, made-up mind. On expansion he has spoken one way and voted another during the same evening and in the same discussion. About expenditure nobody can state what his real opinion is, except that he rather dreads the tendency to lavishness, which yet he does not oppose,—not a very persuasive frame. of mind. He is like the well-known economical gentle- man who groans over his accounts, vows he shall be ruined, and then pays them up and goes cheerful as ever to his dinner. Nor, though he criticises foreign policy, can anybody declare that he knows. even in the haziest outline,- what, if he were in power, Sir Henry's policy would be, or how it would differ from the policy of those who now advise the Crown. Lord Salisbury is far too silent upon his special business, forgetting that in foreign affairs the democracy is always hungering for a lead, and over- looking the immense advantage he might gain by helping to crystallise the floating views of the nation ; but at. least his deeds speak for him trumpet-tongued. He at least does not think it dangerous to be responsible for Indias of tropical and subtropical forest, or for millions of breechless blacks ; but what does Sir Henry think of his success ? Africa, we will say, is settled, at all events for a year or two ; but if Sir H. Campbells Bannerman were in power, and sanctioning despatches to Sir Claude Macdonald, what would he actually do in China ? He will reply that he cannot answer the question until he is in office ; but surely that is something of an evasion. Nobody is asking him_ for a policy in detail, but for the principles of a policy. Has he one ? He laughs in his speech to the National Liberal Club at the opportunism of the Government, which no doubt does sometimes evade "the interests" in a way we do not like to see, and on the question of vaccination shrank from its clear duty ; but is he not himself also an opportunist ? Certainly he leaves on- our mind, and those of a great many of his own followers, the impression that, being aware of great cleavages of opinion in his own ranks, he had rather reserve his own decision till he has arrived at one, or until it is safe to proclaim it. That is safer, perhaps, than the course of Lord Rosebery, who pro- claimed his own genuine opinion, and then retracted it for fear of Irish votes ; but can a defeated and disin- tegrated party be restored to health and efficiency by safe talk ? We doubt it greatly, and must say that fully recognising, as we have so often done, Sir Henry Campbell-Bannerman's considerable qualities, we have so far been much disappointed with his leadership. If we add that we are disappointed because we wish to see the Liberal party again possessed of a clear pro- gramme, fixed ideas, and a determined leader, the evening papers will accuse us of hypocrisy, but that is the truth,. nevertheless.