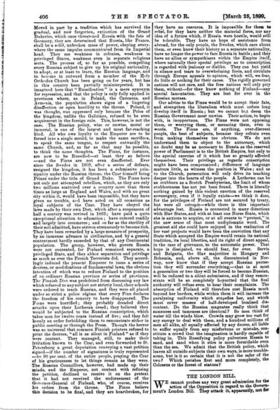 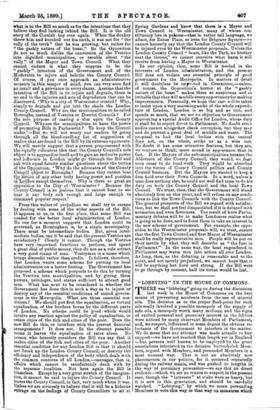 WE cannot profess any very great admiration for the action of the Opposition in regard to the Govern- ment's London Bill. They attack it, apparently, not tor whatis in the Bill so much as for the intentions that they believe they find lurking behind the Bill. It is the old story of the Cornish boy over again. When the donkey threw him and knocked out his teeth, it was not for " the wally of the teeth" that he was grieving, but rather for " the gashly nature of the beast." So the Opposition do not so much dislike the conversion of the Vestries into dignified municipalities, or trouble about " the vally". of the Mayor and Town Council. What they cannot endure is what they suppose to be the "rashly intention of the Government and of the Moderates to injure and belittle the County CounciL Of course, if you once approach an administrative measureln this temper of mind, you can very soon find an insult and a grievance in every clause, Assume that the intention of the Bill is to injure and degrade, there is no end to the injuries and acts of degradation that can be disCovered. 'Why is a city of Westminster created? Why, simply to degrade and put into the shade the London County Council. Whv are the municipalities to be called Boroughs, instead of Vestries or District Councils ? For the, sole purpose of casting a slur, upon the County Council. Why are the municipalities to have the power of promoting Bills in Parliament ?. To keep the Council under2—But we will not weary our readers by going through all the blood-curdling list of suggestions of malice that are found in the Bill by its extreme opponents. Wei willmerely suggest that a person prepossessed with the equally ridiculous idea that the County Council's sole object is to aggrandise itself and to gain an exclusive power and influenee in London might go through the Bill and ask with equal fatuity similar questions about the tactics Of.the Opposition. Why do the advocates of the County Council object to Boroughs ? Because they cannot bear the 'notion of any other body having power, and position inIoifflon except themselves. Why is there so great an opposition to the City of Westminster ? Because the County Council is so jealous that it cannot bear to see near, it any body rich enough and large enough to command popular respect.'

From this welter of prejudices we shall try to escape by dealing with some of the wider aspects of the Bill. It appears to us, in the first place, that some Bill was needed for the better local administration of London. No one for a moment suggests that London could be governed, as Birmingham is, by a single municipality. There must be intermediate bodies. But, given inter- mediate bodies, can it be said that the present Vestries are satisfactory ? Clearly it cannot. Though the Vestries have very importadt functions to perform, and spend a great deal of public money, they do not as a rule attract a very good stamp of man. Vestryman is a name which brings discredit rather than credit. It follows, therefore, that London wants some scheme for putting its local administration on a better footing. The Government has proposed a scheme which purports to do this by turning the Vestries into municipalities, and by giving them powers,. privileges, and status sufficient to attract good men. What has next to ba considered is whether the GOvernment has done this in such a way as to injure or destroy any of the essential conditions of sound govern- ment in the Metropolis. What are those essential con- ditions ? We should put first the equalisation, or virtual equalisation, of the burdens borne by the different parts of London. No scheme could be good which would involve any reaction against the policy of equalisation, or create cities of the rich and cities of the poor. Does the new Bill do this, or interfere with the present financial arrangements ? It does not. In the clearest possible terms -it leaves the equalisation of rates alone. No person who honestly considers the Bill can say that it makes cities of the rich and cities of the poor. Another essential condition for any London Bill is that it should not break up the London County Council, or destroy the efficiency and independence of the body which deals with the common concerns of all London,—manages, that is, affairs which cannot be satisfactorily ,dealt with by the separate localities. But here again the Bill is blameless. Except by a very great stretch of the imagina- tion, it cannot be said to injure the County Council. It leaves the County Council, in fact, very much where it was. Unless we are seriously to believe that it will be a hideous outrage on the feelings of County Councillors to sit at Spring Gardens and know that there is a Mayor and Town Council in Westminster, many of whose con- stituency live in palaces—that is rather tall language, we admit, for Eaton Place, or even for Belgrave Square—we cannot honestly say that the London County Council will be injured even by the Westminster proposals. Unless the London County Council " bears, like the Turk, no brother next the throne," we cannot conceive what harm it will receive from having a Mayor in Westminster.

In our opinion, then, some Bill is needed in the interests of London administration, and the present Bill does not violate any essential principle of good. government for the Metropolis. In matters of detail it will doubtless be improved in Committee,—unless, of course, the Opposition's horror at the " gashly nature of the beast" makes them so suspicious and so irritable that they will muddle every opportunity for making improvements. Personally, we hope that care will be taken to insist upon a very searohing audit of the whole expendi- ture of London. London is so big and so rich, and spends so much, that we see no objection to Government appointing a special Audit Offii..e for London, whose duty it shall be to report direct to Parliament. No doubt strict audits cannot altogether check corruption, but they may and- do prevent a great deal of muddle and waste. The proposal to link the local bodies with the central does not, on the whole, strike us as a wise one. No doubt it has some attractive features, but they are, we venture to think, more sound in appearance than in fact. If the Mayors of the sub-municipalities became. the Aldermen of the County Council, they would, we fear, soon cease to do local work. They would be absorbed into the vortex of County Council politics and County Council business. But the Mayors are wanted to keep a firm hold over their Town COuncils. In a word, unless a man does nothing else, he could not well find time to do his duty on both the County Council and the local Town Council. We trust, then, that the Government will stand absolutely firm on this point, and will refuse on any condi- tions to link the Town Councils with the County Council. The general prospects of the Bill we regard with satisfac- tion, but we shall not feel disappointed if it is debated with animation and even fierceness. The result of keen Parlia- mentary debates will be to make Londoners realise what is going to be done, and to force them to take an interest in the new scheme of government. For example, the oppo- sition to the Westminster proposals will, we trust, ensure that the first Town Council and first Mayor of Westminster shall be really representative men. People will be put on their mettle by what they will describe as " the fuss in Parliament." In the same way, the heat engendered in Parliament may warm men into action all over London. As long, then, as the debating is reasonable and to the point, and not merely prejudiced, we cannot hope that it will be anything but keen and strong. If the Bill were to go through by consent, half its virtue would be lost.