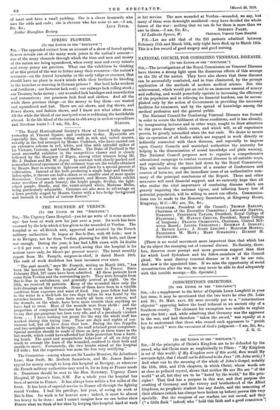 Page 12, 25 March 1916 — NATIONAL COUNCIL FOR COMBATING VENEREAL DISEASES. [To THE EDITOR OF
Close

NATIONAL COUNCIL FOR COMBATING VENEREAL DISEASES. [To THE EDITOR OF

THE " SPECTATOR."] SIR,—The investigations of the Royal Commission on Venereal Diseases have thrown a strong light upon the disastrous effects of this scourge on the life of the nation. They have also shown that these diseases can be successfully combated, and in time eliminated, by the prompt application of the methods of modern medical science. But this achievement, which would put an end to an immense amount of misery and suffering, and would powerfully operate in increasing the efficiency of the population and in relieving its financial burdens, can be accom- plished only by the action of Government in providing the necessary facilities for treatment, and by the spread of knowledge among the medical profession and the general public.

The National Council for Combating Venereal Diseases was formed in order to secure the fulfilment of these conditions, and it has already, by inaugurating lectures and in other ways, sought to draw attention to the grave danger which exists, and which will, as all experience proves, be greatly intensified when the war ends. We desire to secure the co-operation of all bodies which are engaged in work directly or indirectly connected with these diseases, and especially to impress upon County Councils and municipal authorities the necessity for helping in the dissemination of sound knowledge and plain warning. The National Council proposes now to organize a comprehensive educational campaign to combat venereal diseases in all suitable ways. and especially along the lines laid down by the Royal Commission. This will involve the organization of a number of Conferences and courses of lectures, and the immediate issue of an authoritative sum- mary of the principal conclusions of the Report. These and other measures will need financial support, and we earnestly hope that all who realize the vital importance of combating diseases which are gravely impairing the national vigour, and inflicting heavy loss of potential population, will be willing to assist our efforts. Communica- tions can be made to the Honorary Secretaries, at Kingsway House, Kingsway, W.C.—We are, Sir, &c.,

[There is no social movement more important than that which has for its object the stamping out of venereal disease. No Society, there. for, deserves more prompt and more generous support than that for which Lord Sydenham and his fellow-members of the Council plead. We must destroy venereal disease or it will be our ruin. And now is the appointed time. If we miss the opportunity of social reconstruction after the war, we may never be able to deal adequately with this terrible scourge.—En. Spectator.]