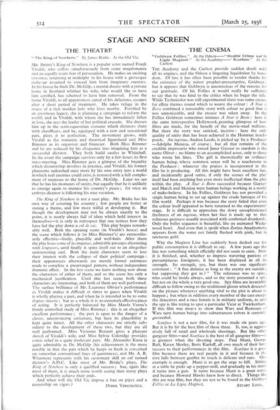 "Goldwyn Follies." At the Odeon—" Double Crime sur In Ligne Maginot." At the Academy—' Scarface." At the Carlton THE Academy and the Carlton provide sudden death with all its engines, and the Odeon a lingering liquidation by bore- dom. Of late it has often been possible to render thanks for the existence of the minor prophet-presumptive, Goldwyn : but it appears that Goldwyn is unconscious of the reasons for our gratitude. Of his Follies it would really be sufficient to say that he was kind to the critics when he begat the title. While Technicolor was still experimental there was some excuse for effete themes round which to weave the colour : A Star is Born combined a reasonable story with colour so good that it was unnoticeable, and the excuse was taken away. In the Follies Goldwyn sometimes imitates A Star is Born : here is the same introspective Hollywood, granting glimpses of ho films are made, for the benefit of the movie-mad million,. But there the story was satirical, incisive : here the only quality of satire that has been achieved is the Horatian hotch- potch. An ingénue, Andrea Leeds, is picked up by a Producer —Adolphe Menjou, of course ; but all that remains of the credible impresario who raised Janet Gaynor to stardom is the name Oliver : no blame to an accomplished actor, only to those who wrote his lines. The girl is theoretically an ordinary human being, whose common sense will be a touchstone tt) the Producer : whatever she praises is incorporated in the film he is producing. All this might have been excellent fun. and incidentally good satire, if only the scenes of the play itself had been anything but even more ineffectual than the play within the play. A Star is Born succeeded because Gaynor and March and Menjou were human beings working in a world of make-believe. In his Follies, Goldwyn has not provided a single human being to set up against the crude baroque of his film world. Perhaps it was because the story failed that even the colour itself appeared to have returned to the experimental stage. It is difficult to appreciate the deitry unsophisticated freshness of an ingenue, when her face is made up to that ochreous greyness usually associated with confirmed drunkards. Only the ballet sequence is beautiful, like an animated Wedg- wood bowl. And even that is spoilt when Zorina Anadyomene appears from the water not faintly flushed with pink, but in unctuous gold.

Why the Maginot Line has suddenly been decked out for public consumption it is difficult to say. A few years ago the line was something which officially did not seem to exist. Now it is finished, and, whether to impress wavering patriots or presumptuous foreigners, it has been displayed in all its strength. Its strength, yes, but there was one significant comment : " A fine defence as long as the enemy are outside ; but supposing they got in ? " The reference was to spies, who could be inside always, and so the story presented a spy, but not on the whole a very good one. Spy films are invariably difficult to follow owing to the traditional gloom which descend on the picture whenever anything vital to the plot is about t happen ; but when in addition every member of the cast excer the detectives and a rare female is in military uniform, to spec the spy is like trying to spot a particular Vicar at Twickenham. If this film was meant to show that Wars and Rumours c Wars turn human beings into subterranean robots it certainly succeeded.

Scarface is not a new film, for it was made six years ago. Butit is by far the best film of these three. It, too, is aggres- sively full of retail and wholesale shootings. But like othc' gangster films—and Scarface is the best of all gangster films-- is greatest when the shooting stops. Paul Muni, Georg, Raft, Karen Morley, Boris Karloff, all owe much of their late success to their performances in this film. Scarface is a goo, film because there are real people in it and because in th rare lulls between gunfire its touch is delicate and sure. On example is enough. Muni is to get the urge to kill. Sittini at a table he picks up a pepper-mill, and• gradually in his mind it turns into a gun. It turns because Muni is a great actor, and because Howard Hawks knew how to direct. Things like this are true film, but they are not to be found -in the Goldwyn