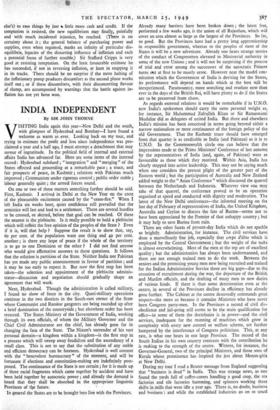 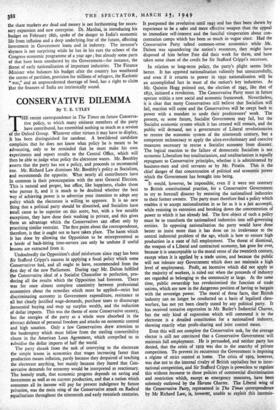 By SIR JOHN THORNE ISITING India again this year—New Delhi and the smith, with glimpses of Hyderabad, and Bombay—I have found a welcome as warm as ever. Looking back on my tour, and trying to estimate the profit and loss since independence was pro- claimed a year and a half ago, I must attempt a detachment that may savour of ingratitude. In the political field of internal and external affairs India haS advanced far. Here are some items of the internal record : Hyderabad subdued ; " integration " and " merging " of the States effected and proceeding at a remarkable pace ; a truce, and fair prospects of peace, in Kashmir ; relations with Pakistan much improved ; Coinniunisni under rigorous control ; public order stable ; labour generally quiet ; the armed forces . sound.

On one or two of these matters something further should be said. First, Kashmir. I arrived in Delhi at the New Year on the crest of the pleasurable excitement caused by the "cease-fire." When I left India six weeks later, quiet confidence still prevailed that the armistice will last and lead to a settlement. There are several hurdles to be crossed, or skirted, before that goal can be reached. Of these the nearest is the plebiscite. Is it really possible to hold a plebiscite which will reflebt the free opinion of the peoples of the State ? Even if it is, will that help ? Suppose the result is to show that, say, 6o per cent. of the population want one thing and 4o per cent. another ; is there any hope of peace if the whole of the territory is to go to one Dominion or the other ? I did not find anyone who would give affirmative answers to these questions. It follows that the solution is partition of the State. Neither India nor Pakistan has yet made any public announcement in favour of partition ; and it may be too early to expect it. But now the first step -has been taken—the selection and appointment of the plebiscite • adminis- tratordiscussion and negotiation should gradually shape an agreement that will work.

Next, Hyderabad. Though the administration is called military, I found no show of force in the city. Quasi-military operations continue in the two districts in the South-east corner of the State where Communist and Razakar gangsters are being rounded up after a brief domination of the countryside ; but elsewhere order has been restored. The States Ministry of the Government of India, working thiough its own officials, of whom the Military GoVernor and the Chief Civil Administrator are the chief, has already gone far in changing the face of the State. The Nizam's surrender of his vast personal domain—a kingdom within a kingdom—is the first step in a process which will sweep away feudalism and the ascendancy of a small class. This is not to say that the substitution of any stable and efficient democracy can be foreseen. Hyderabad is well content with the " benevolent bureaucracy " of the moment, and will be fortunate if elections and constitution-making are indefinitely post- poned. The continuance of the State is not certain ; for it is made up of three racial fragnents which came together by accident -and have been held together by autocratic power ; and already the demand is heard that they- shall be absorbed in the appropriate linguistic Provinces Of "tkie future.

In general the Stites are to be brought Into lino with the Provinces. Already many barriers have been broken down ; the latest feat, performed a few weeks ago, is the union of all Rajasthan, which will cover an area almost as large as the largest of the Provinces. So far, so good. But the Provinces have had a pretty long apprenticeship in responsible government, whereas to the peoples of most of the States it will be a new adventure. Already one hears strange stories of the conduct of Congressmen elevated to Ministerial authority in some of the new Unions ; and it will not be surprising if the process of trial and error among the successors of the autocratic Princes turns out at first to be mostly error. However neat the model con- stitution which the Government of India is devising for the States, its performance will depend on hands which at the best will be inexperienced. Paramountcy, more searching and resolute now than ever in the days of the British Raj, will have plenty to do if the States are to be preserved from chaos. As regards external relations it would be remarkable if in U.N.O. new India's spokesmen should carry the same personal weight as, for instance, Sir Muhammad Zafrullah Khan or Sir Ramaswami Mudaliar did as delegates of united India. But there and elsewhere India's mission has been conceived in terms going beyond either a narrow nationalism or mere continuance of the foreign policy of the old Government. That the Kashmir truce should have emerged from that quarter is as creditable to India (and Pakistan) as it is to U.N.O. In the Commonwealth circle one can believe that the impressions made at the Prime Ministers' Conference of last aununn by the representatives of India (and, again, of Pakistan) were as favourable as those which they received. Within Asia, India has clearly stepped into active leadership. This may not be saying much when one considers the present plight of the greater part of the Eastern world ; but the participation of Australia and New Zealand added weight to the " Asian Conference " which discussed the quarrel between the Netherlands and Indonesia. Whatever view one may take of that quarrel, the conference proved to be an operation organised at speed and conducted with dignity and moderation. The latest of the New Delhi conferences—the informal meeting on the last day of February of representatives of India, the United Kingdom, Australia and Ceylon to discuss the fate of Burma—seems not to have been appreciated by the Premier of that unhappy country ; but it may help to save Burma from ruin.

There are other facets of present-day India which do not sparkle so brightly. Administration, for instance. The civil services have, done a marvellously fine job, especially that corps d'elite which is employed by the Central Government ; but the weight of the tasks is almost overwhelming. Most of the men at the top are of excellent quality ; but the administration has always been undermanned, and there are not enough trained men to do the work. Between the seniors and the promising young men now being recruited and trained for the Indian Administrative Service there are big gaps—due to the cessation of recruitment during the war, the departure of the British and Muslim officials, and the drafting of many men to new duties of various kinds. If there is thus some deterioration even at the centre, in several of the Provinces decline in efficiency has already gone further. The Cabinet at the centre deservedly commands great respect—the more so because it contains Ministers who have never been Congress party-men. In the Provinces a record of civil dis- obedience and jail-going still seems to be the main qualification for office—in some of them the doctrinaire is in power—and the civil services, inadequate for the manning of machines which grow in complexity with every new control or welfare scheme, are further hampered by the interference of Congress politicians. This, at any rate, is what one hears in one large Province. The record Of the South Indian in his own country contrasts with the contribution he is making to the strength of the centre. Witness, for instance, the Governor-General, two of the principal Ministers, and those sons of Kerala whose prominence has inspired the jest about Menon-gitie at New Delhi.

During my tour I read a Reuter message from England suggesting that " business is dead" in India. This Was strange news, as one found the yards full of coffee-curers handlink a good crop, the tea factories and tile factories humming, and spinners working three shifts in mills that were idle a year ago.' There is, no doubt, business and husineis *: and while the established industries go on as usual the share markets are dead and money is not forthcoming for neces- sary expansion and new enterprise. Dr. Matthai, in introducing his budget on February 28th, spoke of the danger to India's economic life from inflation and a deep underlying. fear of the future, affecting investment in Government loans and in industry. The investor's shyness is not surprising while he has in his ears the echoes of the Congress economic programme of a year ago ; but already some parts of that have been smothered by the Government—for instance, the threat of early nationalisation of important industries. The Finance Minister who balances his budget after the country has weathered the storms of partition, provision for millions of refugees, the Kashmir " war," and an unprecedented shortage of food, has a right to claim that the finances of India are intrinsically sound.