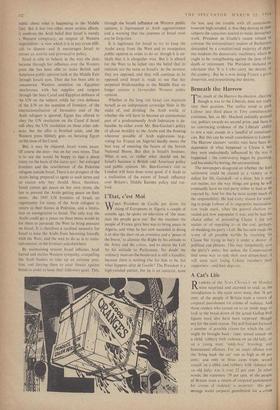 WFIEN President de Gaulle put down the rising of Europeans in Algeria a couple of months ago, he spoke on television of `the man- date the people gave me.' But the mandate the people of France gave him was to bring peace in Algeria, and what he has now suceeded in doing is to shut the door on an armistice and a 'peace of the brave,' to alienate the Right by his attitude to the Army and the colons, and to alarm the Left by his attitude to Parliament. No doubt the ordinary man-on-the-boulevard is still a Gaullist. because there is nothing else for him to be, but what happens after de Gaulle? The President is a high-minded patriot. but he is an autocrat. none the less, and the trouble with all autocractes. however high-minded, is that they destroy in their subjects the capacities needed to make democracy work. President de Gaulle's recent refusal to convene the extraordinary session of Parliament demanded by a constitutional majority of dePo" ties weakens the democratic machinery which he ought to be strengthening against the time of his death•or .retirement The President declared 00 television that 'It is I who carry the destiny of the country. But he is now doing France a grave disservice, and jeopardising that destiny.