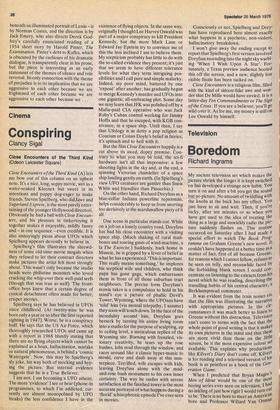 Close Encounters of the Third Kind (Odeon Leicester Square) Close Encounters of the Third Kind (A) lets me bow out of this column on an upbeat note. It's a nice, long, soppy movie, wet as a water-soaked Kleenex but sweet in its intentions and puppy dog-eager to make friends. Steven Spielberg, who did Jaws and Sugarland Express, is the most purely entertaining of the younger Hollywood directors. Obviously he had a ball with Close Encounters, and his pleasure in tinkertoying it together makes it enjoyable, mildly funny and — in one sequence —even credible. It is also annoyingly pious about UFOs which Spielberg appears devoutly to believe in.

Spielberg's film illustrates the shrewdness of some old-time movie moguls when they refused to let their contract directors make pictures the artist felt most strongly about. This wasn't only because the studio heads were philistine monsters who loved cracking the whip over their well-paid serfs (though that was true as well). The frontoffice boys knew that a certain degree of cynical detachment often made for better, crisper movies.

Spielberg says he has believed in UFOs since childhood. (At twenty-nine he was born only a year or so after the first reported sighting in 1947). Worse, he is a conspiracy buff. He says that the US Air Force, which thoroughly researched UFOs and came up with a report in 1968 bluntly stating that there are no flying objects which cannot be explained as a hoax, hallucination, mistake or natural phenomenon, is behind a `cosmic Watergate'. Now, this may be Spielberg's sly joke, his way both of mocking and hyping the picture. But internal evidence suggests that he is a True Believer.

I am not. I am becoming a UFO atheist. The more `evidence' I see or hear (phone-in programmes, to which I'm addicted, currently are almost monopolised by UFO freaks) the less confidence I have in the

existence of flying objects. In the same way, originally I thought Lee Harvey Oswald was part of a major conspiracy to kill President Kennedy, but the more Mark Lane or Edward Jay Epstein try to convince me of this the less inclined I am to believe them. My scepticism probably has little to do with the so-called evidence they present; it's just that we seem to have different tolerance levels for what they term intriguing possibilities and! call pure and simple malarky. Indeed, my poor mind, battered by one 'exposé' after another, has gradually begun to merge Kennedy's murder and UFOs into one gigantic, all-embracing plot. Some day we may learn that JFK was polished off by a Mafia-paid CIA operative who was Jack Ruby's Cuban control working for Jimmy Hoffa and that he escaped, with KGB connivance, in a space ship. Until then, I say that Ufology is as dotty a pop religion as Coueism or Conan Doyle's belief in fairies; it's spinach and to hell with it.

But the film Close Encounters happily is a cut above its awed, dopey premise. Contrary to what you may be told, the sci-fi hardware isn't all that impressive: a few shooting lights in the sky and, at the end, a spinning Victorian chandelier of a space ship landing gently on earth. (In Spielberg's view UFO creatures are gentler than Snow White and friendlier than Pinocchio.)

On the other hand, Richard Dreyfuss as a blue-collar Indiana powerline repairman, helps considerably to keep us from snorting too derisively at the marshmallow piety of it all.

One scene in particular stands out. While on a job on a lonely country road, Dreyfuss has had his close encounter with a visiting space ship. (Much shaking of rural mailboxes and roaring gusts of wind-machine, a la The Exorcist.) Suddenly, back home in Muncie, he is gripped by a fever of belief in what he has experienced. `This is important. This really means something,' he implores his sceptical wife and children, who think papa has gone gaga, which embarrasses them in front of all those suburban tract neighbours. The precise form Dreyfuss's mania takes is a compulsion to hold in his mind's eye a picture of phallic Devil's Tower, Wyoming, where the UF0ans have `told' him (via mental telepathy, I assume) they soon will touch down. In the face of the incredulity around him, Dreyfuss goes berserk by turning his entire living room into a studio for the purpose of sculpting, up to ceiling level, a meticulous replica of the Wyoming site. Burning with frenzied, visionary creativity, he tears up the rose bushes, lobs mud through the window, and races around like a classic hyper-manic to mould, carve and daub away at this masterpiece. Terrified, wife escapes with kids, leaving Dreyfuss alone with the mudand-rose bush monument to his own inner certainty. The way he smiles with serene satisfaction at the finished tower is the most accurate portrayal of what happens during a `florid' schizophrenic episode I've ever seen in movies.

Consciously or not, Spielberg and Dreyfuss have reproduced here almost exactly what happens in a psychotic, non-violent, hallucinatory breakdown.

I won't give away the ending except to report that Spielberg's first version involved Dreyfuss ascending into the night sky warbling `When I Wish Upon A Star'. Fortunately, a Texas preview audience hooted this off the screen, and a new, slightly less risible finale has been tacked on.

Close Encounters is a religious film, filled with the kind of sincere-fake awe and wonder that De Mille would have envied. It is a latter-day Ten Commandments or The Sign of the Cross. If you are a believer, you'll go wild over it. As for me, my money is still on Lee Oswald by himself.