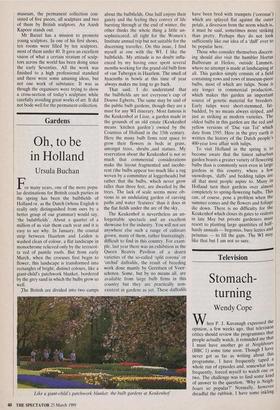 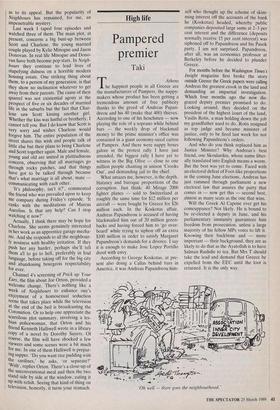 When P. J. Kavanagh expressed the opinion, a few weeks ago, that television critics should review the programmes that people actually watch, it reminded me that I must have another go at Neighbours (BBC I) some time soon. Though I have never got as far as writing about this programme, I have frequently taped a whole run of episodes and, somewhat less frequently, forced myself to watch one or two. The challenge was to find some kind of answer to the question, 'Why is Neigh- bours so popular?' Normally, however dreadful the rubbish. I have some inkling as to its appeal. But the popularity of Neighbours has remained, for me, an Impenetrable mystery.

Last week I taped four episodes and watched three of them. The main plot, at present, concerns a big bust-up between Scott and Charlene, the young married couple played by Kylie Minogue and Jason Donovan. In real life Minogue and Dono- van have both become pop stars. In Neigh- bours they continue to lead lives of stupefying dulness on a horrible modern housing estate. One striking thing about them, to a person of my generation, is that they show no inclination whatever to get away from their parents. The cause of their quarrel was not existential agony at the Prospect of five or six decades of married life in the suburbs but the fact that Char- lene saw Scott kissing another girl. Whether the kiss was lustful or brotherly,I

i cannot tell you. But I do know that Scott s very sorry and wishes Charlene would forgive him. The entire population of the street shares this wish and people talk of little else but their plans to bring Charlene and Scott together again. Male and female, young and old are united in platitudinous concern, observing that all marriages go through rocky patches, and that things have got to be talked through because that's what marriage is all about, mate communicating with each other. 'It's philosophy, isn't it?', commented the friend who was prevailed upon to keep me company during Friday's episode. 'It ranks with the meditations of Marcus Aurelius. Is that any help? Can I stop watching it now?' Actually, I think there may be hope for Charlene. She seems genuinely interested In her work as an apprentice garage mecha- nic. And she responds to all the neighbour- ly nosiness with healthy irritation. If they Push her any harder, perhaps she'll tell them all to go to hell, preferably in foul language, before taking off for the big city and abandoning bourgeois respectability for ever.

Channel 4's screening of Prick up Your Ears, the film about Joe Orton, provided a welcome change. There's nothing like a week of Neighbours to enhance one's enjoyment of a homosexual seduction scene that takes place while the television at the end of the bed is broadcasting the Coronation. Or to help one appreciate the scurrilous plot summary, involving a les- bian policewoman, that Orton and his friend Kenneth Halliwell wrote in a library Copy of a novel by Dorothy Sayers. Of C9urse, the film will have shocked a few viewers and some scenes were a bit much for me. In one of them Halliwell is prepar- ing supper. `Do you want rice pudding with the sardines,' he asks, 'or separate?' With', replies Orton. There's a close-up of the unconventional meal and then the two stand side by side at the window, eating it Up with relish. Seeing that kind of thing on television, honestly, it turns your stomach.