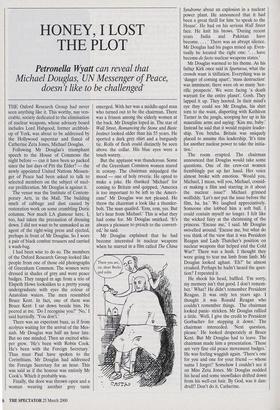 HONEY, I LOST THE PLOT

Petronella Wyatt can reveal that

Michael Douglas, UN Messenger of Peace, doesn't like to be challenged'

THE Oxford Research Group had never seen anything like it. This worthy, nay ven- erable, society dedicated to the elimination of nuclear weapons, whose advisory board includes Lord Habgood, former archbish- op of York, was about to be addressed by the Hollywood superstar and fiancé of Catherine Zeta Jones, Michael Douglas.

Following Mr Douglas's triumphant speech to the House of Commons the night before — can it have been so packed since the last days of Pitt the Elder? — the newly appointed United Nations Messen- ger of Peace had been asked to talk to selected members on the subject of nucl- ear proliferation. Mr Douglas is against it.

The venue was the Institute of Contem- porary Arts, in the Mall. The building smelt of cabbage and dust caused by restoration work on some crumbling Doric columns. Not much LA glamour here. I, too, had taken the precaution of dressing down. I did not want to be unmasked as an agent of the right-wing press and ejected, perhaps in front of Mr Douglas. So I wore a pair of black combat trousers and carried a wash-bag.

I had been wise to do so. The members of the Oxford Research Group looked like people from one of those old photographs of Greenham Common. The women were dressed in shades of grey and wore peace badges. They ranged in age from a trio of Elspeth Howe lookalikes to a pretty young undergraduate with eyes the colour of Anatolian waters. The men resembled Bruce Kent. In fact, one of them was Bruce Kent. I sat down beside him. He peered at me. `Do I recognise you?' No,' I said hurriedly. 'You don't.'

There was an expectant buzz, as if from acolytes waiting for the arrival of the Mes- siah. Mr Douglas was half an hour late. But no one minded. Then an excited whis- per grew. 'He's been with Robin Cook. He's been with the Foreign Secretary.' Thus must Paul have spoken to the Corinthians. Mr Douglas had addressed the Foreign Secretary for an hour. This was said as if the honour was entirely Mr Cook's. Which it probably was.

Finally, the door was thrown open and a woman wearing another grey tunic emerged. With her was a middle-aged man who turned out to be the chairman. There was a frisson among the elderly women at the back. Mr Douglas loped in. The star of Wall Street, Romancing the Stone and Basic Instinct looked older than his 55 years. He sported a dark grey shirt and a burgundy tie. Rolls of flesh could distinctly be seen above the collar. His blue eyes were a touch watery.

But the applause was thunderous. Some of the Greenharn Common women stared in ecstasy. The chairman misjudged the mood — one of holy reverie. He opted to make a joke. He thanked 'Michael' for coming to Britain and quipped, 'America is too important to be left to the Ameri- cans!' Mr Douglas was not pleased. He threw the chairman a look like a thunder- bolt. The man quailed. 'Erm, erm, yes. But let's hear from Michael.' This is what they had come for. Mr Douglas smirked. 'It's always a pleasure to preach to the convert- ed,' he said.

Mr Douglas explained that he had become interested in nuclear weapons when he starred in a film called The China Syndrome about an explosion in a nuclear power plant. He announced that it had been a great thrill for him `to speak to the House'. He had on his serious Wall Street face. He knit his brows. 'During recent years India and Pakistan have become. . . . ' There was an abrupt silence. Mr Douglas had his pages mixed up. Even- tually he located the right one: . have become de facto nuclear weapons states.'

Mr Douglas warmed to his theme. As his father Kirk once said in Spartacus, what the crowds want is titillation. Everything was in 'danger of coming apart'; 'mass destruction' was imminent; there were oh so many 'hor- rific prospects'. We were facing 'a death warrant for the entire planet'. Gosh. They lapped it up. They hooted. In their mind's eye they could see Mr Douglas, his shirt torn to the waist, disporting with Kathleen Turner in the jungle, scooping her up in his masculine arms and saying: 'Kiss me, baby.' Instead he said that it would require leader- ship. You betcha. Britain was uniquely placed to assume this leadership. 'It's time for another nuclear power to take the initia- tive.'

The room erupted. The chairman announced that Douglas would take some questions. One of the crew-cut women tremblingly put up her hand. Her voice almost broke with emotion. 'Would you, Michael, I mean, will you, Michael, consid- er making a film and starring in it about the nuclear issue?' Michael grinned wolfishly. 'Let's not put the issue before the film, ha, ha.' We laughed appreciatively. Someone else lobbed him a soft ball. I could contain myself no longer. I felt like the wicked fairy at the christening of the princess. 'Excuse me,' I said. Mr Douglas swivelled around. 'Excuse me, but what do you think of the view that it was President Reagan and Lady Thatcher's position on nuclear weapons that helped end the Cold War?' There was a hush. I thought they were going to tear me limb from limb. Mr Douglas looked aghast. 'Eh?' he almost croaked. Perhaps he hadn't heard the ques- tion? I repeated it.

He shook his head, baffled. 'I'm sorry, my memory isn't that good. I don't remem- ber.' What? He didn't remember President Reagan. It was only ten years ago. I thought it was Ronald Reagan who couldn't remember things. The chairman looked panic- stricken. Mr Douglas rallied a little. 'Well, I give the credit to President Gorbachev for stepping it down.' The chairman interceded. 'Next question, please.' He looked desperately at Bruce Kent. But Mr Douglas had to leave. The chairman made him a presentation. 'These are very fine old peace movement badges.' He was feeling waggish again. 'There's one for you and one for your friend — whose name I forget!' Somehow I couldn't see it on Miss Zeta Jones. Mr Douglas nodded his head and some snowflakes drifted down from his well-cut hair. By God, was it dan- druff? Don't do it, Catherine.