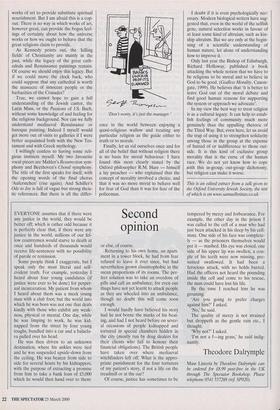 Page 22, 25 March 2000 — works of art to provide substitute spiritual nourishment. But I
Close

works of art to provide substitute spiritual nourishment. But I

am afraid this is a cop- out. There is no way in which works of art, however great, can provide the bogus feel- ings of certainty about how the universe works or how we ought to behave that the great religions claim to provide.

As Kennedy points out, the 'killing fields' of Christianity are mainly in the past, while the legacy of the great cath- edrals and Renaissance paintings remain. Of course we should enjoy this legacy. But if we could move the clock back, who could suppose that any cathedral is worth the massacre of innocent people or the barbarities of the Crusades?

True, we cannot hope to gain a full understanding of the Jewish cantor, the Latin Mass, or the Passions of J.S. Bach, without some knowledge of and feeling for the religious background. Nor can we fully understand mediaeval Renaissance or baroque painting. Indeed I myself would get more out of visits to galleries if I were better acquainted both with the New Tes- tament and with Greek mythology.

I willingly confess to having some reli- gious instincts myself. My two favourite vocal pieces are Mahler's Resurrection sym- phony and Beethoven's Choral symphony. The title of the first speaks for itself, with the opening words of the final chorus `Auferstehen' (rise again). And Schiller's Ode to Joy is full of vague but strong theis- tic references. But there is all the differ-

'Don't worry, it's just the manager.'

ence in the world between enjoying a quasi-religious wallow and treating any particular religion as the guide either to truth or to morals.

Finally, let us rid ourselves once and for all of the belief that without religion there is no basis for moral behaviour. I have found this most clearly stated by the Oxford philosopher R.M. Hare — himself a lay preacher — who explained that the concept of morality involved a choice, and that it was no more moral to behave well for fear of God than it was for fear of the policeman. doubt if it is even psychologically nec- essary. Modern biological writers have sug- gested that, even in the world of the selfish gene, natural selection works in favour of at least some kind of altruism, such as kin- ship altruism. But we are only at the begin- ning of a scientific understanding of human nature, let alone of understanding how to improve it.

Only last year the Bishop of Edinburgh, Richard Holloway, published a book attacking the whole notion that we have to be religious to be moral and to believe in God to be good. (Godless Morality, Canon- gate, 1999). He believes that 'it is better to leave God out of the moral debate and find good human reasons for supporting the system or approach we advocate'.

In my view the best way to treat religion is as a cultural legacy. It can help to estab- lish feelings of community much more genuinely than the appalling rhetoric of the Third Way. But, even here, let us avoid the trap of using it to strengthen solidarity among those in the group at the expense of hatred of or indifference to those out- side. It is this kind of exclusive group morality that is the curse of the human race. We do not yet know how to cope .with this in-group, out-group dichotomy, but religion can make it worse.

This is an edited extract from a talk given to the Oxford University Jewish Society, the text of which is on www.samuelbrittan.co.uk