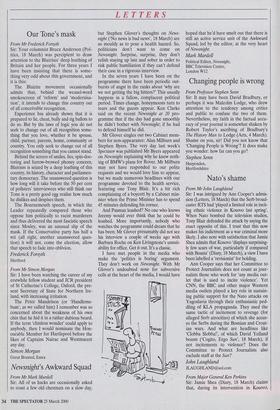 From Mr Frederick Forsyth Sir: Your columnist Bruce Anderson (Pol- itics, 18 March) was percipient to draw attention to the Blairites' deep loathing of Britain and her people. For three years I have been insisting that there is some- thing very odd about this government, and it is this: The Blairite movement occasionally admits that, behind the weasel-word smokescreen of 'reform' and 'modernisa- tion', it intends to change this country out of all conceivable recognition.

Experience has already shown that it is prepared to lie, cheat, bully and rig ballots to do so. But by the laws of logic you do not seek to change out of all recognition some- thing that you love, whether it be spouse, child, partner, parents, home, community or country. You only seek to change out of all recognition something that you cannot stand.

Behind the screen of smiles, lies, spin-doc- toring and furrow-browed phoney concern, Blairism is seized by a deep loathing of this country, its history, character and parliamen- tary democracy. The unanswered question is how long will it take before the 50 per cent of pollsters' interviewees who still think our Tone is a pretty good egg realise how much he dislikes and despises them.

The Bournemouth speech, in which the Leader repeatedly compared those who oppose him politically to racist murderers and thus delivered the most fascistic speech since Mosley, was an unusual slip of the mask. If the Conservative party has half a wit (all right, another unanswered ques- tion) it will not, come the election, allow that speech to fade into oblivion.