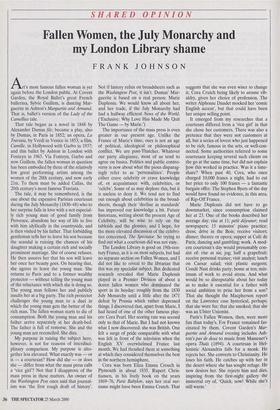 Fallen Women, the July Monarchy and my London Library shame

Art's most famous fallen woman is yet again before the London public. At Covent Garden, the Royal Ballet's great French ballerina, Sylvie GuiItem, is dancing Mar- guerite in Ashton's Marguerite and Armand. That is, ballet's version of the Lady of the Camellias tale.

That tale began as a novel in 1848 by Alexander Dumas flis; became a play, also by Dumas, in Paris in 1852; an opera, La Traviata, by Verdi in Venice in 1853; a film, Camille, in Hollywood with Garbo in 1937; and this ballet by Ashton in London with Fonteyn in 1963. Via Fonteyn, Garbo and now Guillem, the fallen woman in question has been embodied by three of the relatively few great performing artists among the women of the 20th century, and now early 21st. To them must be added Callas, the 20th century's most famous Traviata.

The tale, it may be remembered, is the one about the expensive Parisian courtesan during the July Monarchy (1830-48) who to her surprise falls in love with a not especial- ly rich young man of good family from Provence, abandons her way of life to live with him idyllically in the countryside, and is then visited by his father. That forbidding gentleman tells her to leave his son because the scandal is ruining the chances of his daughter making a certain rich and socially prominent marriage. She of course refuses. He then assures her that his son will leave her once her beauty goes. On hearing that, she agrees to leave the young man. She returns to Paris and to a former wealthy protector — without telling the young man of the reluctance with which she is doing so. The young man follows her and publicly insults her at a big party. The rich protector challenges the young man to a duel in which the young man gets the better of the rich man. The fallen woman starts to die of consumption. Both the young man and his father arrive separately at her death-bed. The father is full of remorse. She and the young man are reconciled. She dies.

My purpose in raising the subject here, however, is not for reasons of interdisci- plinary comparison. My purpose is alto- gether less elevated. What exactly was — or is — a courtesan? How did she — or does she — differ from what the mass press calls a 'vice girl'? Not that I disapprove of the mass press in these matters. An owner of the Washington Post once said that journal- ism was 'the first rough draft of history'. Not if history relies on broadsheets such as the Washington Post, it isn't. Dumas' Mar- guerite is based on a real person: Marie Duplessis. We would know all about her, and her trade, if the July Monarchy had had a halfway efficient News of the World. (Exclusive: Why Love Has Made Me Quit The Game — by Marie.') The importance of the mass press is even greater in our present age. Unlike the France of Marie's time, ours is not an age of political, ideological or philosophical conflict. We are post-Thatcher. Whatever our party allegiance, most of us tend to agree on basics. Politics and public contro- versy is now about what the pious disparag- ingly refer to as 'personalities'. People either crave celebrity or crave knowledge of, or acquaintance with, celebrities, or `celebs'. Some of us may deplore this, but it is useless to deny it. We tend not to find out enough about celebrities in the broad- sheets, though their 'decline in standards' has improved our knowledge a bit. Future historians, writing about the present Age of Celebrity, will be wise to rely on the tabloids and the glossies, and I hope, for the more elevated discussion of the celebri- ties concerned, The Spectator. So trying to find out what a courtesan did was not easy.

The London Library is good on 19th-cen- tury France, as it is on most subjects, but had no separate section on Fallen Women, and I did not like to reveal to the librarian that this was my specialist subject. But dedicated research revealed that Marie Duplessis played in a Premier Division of about a dozen fallen women who dominated the sport in its heyday: roughly from the 1830 July Monarchy until a little after the 1871 defeat by Prussia which rather depressed things. I discovered that, apart from Marie, I had heard of one of the other famous play- ers: Cora Pearl. Her scoring rate was second only to that of Marie. But I had not known what I now discovered: she was British. One felt a surge of pride comparable with what was felt in front of the television when the English XV overwhelmed France last month. We had thrashed them at something at which they considered themselves the best in the northern hemisphere.

Cora was born Eliza Emma Crouch in Plymouth in about 1835. Rupert Chris- tiansen, in his lively book on the years 1869-76, Paris Babylon, says her real sur- name might have been Emma Crutch. That suggests that she was even wiser to change it; Cora Crutch being likely to arouse rib- aldry, given her choice of profession. The writer Alphonse Daudet mocked her 'comic English accent', but that could have been her unique selling point.

It emerged from my researches that a courtesan differed from a 'vice girl' in that she chose her customers. There was also a pretence that they were not customers at all, but a series of lovers who just happened to be rich, famous in the arts, or well-con- nected. Some authorities referred to some courtesans keeping several such clients on the go at the same time, but did not explain Dow this worked in practice. Was it a time- share? When past 40, Cora, who once charged 10,000 francs a night, had to cut her price to only 100 francs — a fantastic bargain offer. The Stephen Byers of the day would have found no evidence, in this area, of Rip-Off France.

Marie Duplessis did not have to go downmarket, since consumption claimed her at 23. One of the books described her average day: rise at 11; petit defeuner; read newspapers; 15 minutes' piano practice; dress; drive in the Bois; receive visitors; dinner; theatre or opera; supper at Café de Paris; dancing and gambling; work. A mod- ern courtesan's day would presumably con- sist of: rise at six; jog; half a grapefruit; receive personal trainer; visit analyst; lunch on Caesar salad; visit plastic surgeon; Conde Nast drinks party; home at ten; min- imum of work to avoid stress. And what would be so disreputable about her today as to make it essential for a father with social ambition to prise her from a son? That she thought the Macpherson report on the Lawrence case hysterical, perhaps; that she wore fur; that she smoked; that she was an Ulster Unionist.

Paris's Fallen Women, then, were more fun than today's. For France remained fas- cinated by them. Covent Garden's Mar- guerite and Armand evening includes Ash- ton's pas de deux to music from Massenet's opera Thai's (1894). A courtesan in Hel- lenistic Alexandria falls for a monk. He rejects her. She converts to Christianity. He loses his faith. He catches up with her in the desert where she has sought refuge. He now desires her. She rejects him and dies, inspiring from the first-night gallery the immortal cry of, 'Quick, now! While she's still warm.'