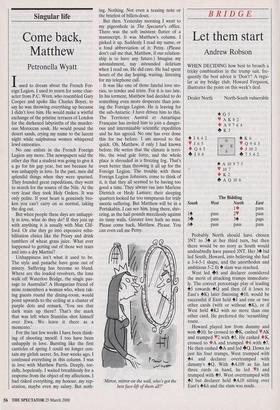 WHEN DECIDING how best to broach a tricky combination in the trump suit, fre- quently the best advice is 'Don't'! A regu- lar at my bridge club, Howard Ferguson, illustrates the point on this week's deal.

Dealer North North-South vulnerable The Bidding South West North East 1* pass 14 pass 2V pass 3+ pass 34 pass 64 pass pass pass Probably North should have chosen 3NT to 34 at her third turn, but then there would be no story as South would undoubtedly have passed 3NT. Her 34 bid led South, Howard, into believing she had a 3-4-5-1 shape, and the unorthodox and ambitious 5-2 fit 4 slam was reached.

West led +8 and declarer considered the merit of attacking trumps immediate- ly. The correct percentage play of leading 45 towards 40 and then (if it loses to East's 4K) later finessing 410, would be successful if East held 4J and one or two other cards (with or without 4K), or if West held 41(..T with no more than one other card. He preferred the 'scrambling' route.