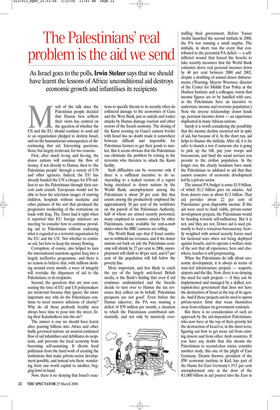 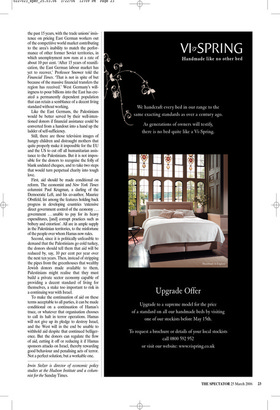 The Palestinians’ real problem is the aid we send

As Israel goes to the polls, Irwin Stelzer says that we should have learnt the lessons of Africa: unconditional aid destroys economic growth and infantilises its recipients Much of the talk since the Palestinian people decided that Hamas best reflects their views has centred on the question of whether the US and the EU should continue to send aid to an organisation pledged to destroy Israel, and on the humanitarian consequences of discontinuing that aid. Interesting questions, those, but largely irrelevant, for two reasons.

First, after much to-ing and fro-ing, the donor nations will continue the flow of money, if not directly to Hamas, then to ‘the Palestinian people’ through a variety of UN and other agencies. Indeed, the EU has already handed the UN a cheque for $78 million to see the Palestinians through their current cash crunch. Europeans would not be able to bear the television images of starving children, hospitals without medicine and other pictures of the sort that produced the progressive weakening of the restrictions on trade with Iraq. The Times had it right when it reported that EU foreign ministers are meeting ‘to consider how to continue providing aid to Palestinians without endorsing what is regarded as a terrorist organisation by the EU and the US’. Not whether to continue aid, but how to keep the money flowing.

Corruption, of course, also helped to turn the international sanctions against Iraq into a largely ineffective programme, and there is no reason to believe that, with millions sloshing around every month, a wave of integrity will overtake the dispensers of aid to the Palestinians, or its recipients.

Second, the questions that are now consuming the time of EU and US policymakers are irrelevant because they ignore the more important one: why do the Palestinians continue to need massive infusions of charity? Why do all those perfectly healthy men always have time to pour into the street, firing their Kalashnikovs into the air?

The answer is one we should have learnt after pouring billions into Africa and other badly governed nations: an assured continued flow of aid infantilises and debilitates its recipients, and prevents the local economy from becoming self-sustaining. It diverts local politicians from the hard work of creating the institutions that make private-sector development possible, and instead sets them wandering from one world capital to another, begging bowl in hand.

Now, there is no denying that Israel’s reac tions to specific threats to its security often do collateral damage to the economies of Gaza and the West Bank, just as suicide and rocket attacks by Hamas damage tourism and other sectors of the Israeli economy. The closing of the Karni crossing on Gaza’s eastern border with Israel has no doubt made it somewhere between difficult and impossible for Palestinian farmers to get their goods to market. But it seems obvious that the Palestinians can eliminate the problem by reining in the terrorists who threaten to attack the Karni facility.

Such difficulties can be overcome only if there is a sufficient incentive to do so. According to a leaked version of a report being circulated to donor nations by the World Bank, unemployment among the Palestinians is about 20 per cent. But that counts among the productively employed the approximately 30 per cent of the workforce on the payroll of the Palestinian Authority, half of whom are armed security personnel, many employed to counter attacks by other Palestinians, many available for rent-a-mob duties when the BBC cameras are rolling.

The World Bank says that if Israel continues to withhold tax revenues, and if the donor nations cut back on aid, the Palestinian economy will shrink by 27 per cent in 2006, unemployment will climb to 40 per cent, and 67 per cent of the population will fall below the poverty line.

More important, and less likely to catch the eye of the largely anti-Israel British media, is the Bank’s finding that even if aid continues undiminished and the Israelis decide to turn over to Hamas the tax revenues they collect on its behalf, ‘Palestinian prospects are not good’. Even before the Hamas takeover, the PA was running a deficit of $70 million per month, a situation to which the Palestinians contributed substantially, and not only by massively over staffing their government. Before Yasser Arafat launched the second intifada in 2000, the PA was running a small surplus. The intifada, in short, was the event that contributed to the perennial PA deficit — a selfinflicted wound that forced the Israelis to take security measures that the World Bank estimates drove real personal incomes down by 40 per cent between 2000 and 2002, despite a doubling of annual donor disbursements. (Warning: Meyrav Wurmser, director of the Center for Middle East Policy at the Hudson Institute and a colleague, warns that income figures are to be handled with care, as the Palestinians have an incentive to understate income and overstate population.) Note the inverse relationship: donor funds up, personal incomes down — an experience duplicated in many African nations.

Surely it is worth considering the possibility that the income decline occurred not in spite of aid, but because of it. In the short run, aid helps to finance the intifada. After all, it is far safer to launch a war if someone else is going to pick up the bill, pay your troops and bureaucrats, and fund the social services you provide to the civilian population. In the longer run, the charity handouts have made the Palestinians so addicted to aid that they cannot conceive of economic development led by a private sector.

The annual PA budget is some $1.9 billion, of which $1.2 billion goes on salaries. Aid from donors runs at about $1.3 billion. That aid provides about 22 per cent of Palestinians’ gross disposable income. If this aid were used to fund viable, private-sector development projects, the Palestinians would be heading towards self-sufficiency. But it is not, and they are not. Donor aid is used primarily to feed a voracious bureaucracy, heavily weighted with armed security forces used for factional wars when not being deployed against Israelis, and to operate a welfare state of the sort that all experience, here and elsewhere, teaches is self-perpetuating.

When the Palestinians do talk about economic development, it is always in terms of state-led infrastructure projects — seaports, airports and the like. Now, there is no denying the need for such projects — if they can be implemented and managed by a skilled, corruption-free government that does not have the destruction of Israel at the top of its agenda. And if those projects can be used to spawn private-sector firms that wean themselves away from reliance on government contracts.

But there is no consideration of such an approach by the aid-dependent Palestinians, who now have at the top of their priority list the destruction of Israel or, in the short term, figuring out how to get more aid from existing donors and from other Arab countries. If you have any doubt that this dooms the Palestinians to second-class status, consider another study, this one of the plight of East Germany. Dennis Snower, president of the IfW economic institute in Kiel, lays part of the blame for East Germany’s 19.5 per cent unemployment rate at the door of the €1,000 billion in aid poured into the East in the past 15 years, with the trade unions’ insistence on pricing East German workers out of the competitive world market contributing to the area’s inability to match the performance of other former Soviet territories, in which unemployment now runs at a rate of about 10 per cent. ‘After 15 years of reunification, the East German labour market has yet to recover,’ Professor Snower told the Financial Times. ‘That is not in spite of but because of the massive financial transfers the region has received.’ West Germany’s willingness to pour billions into the East has created a permanently dependent population that can retain a semblance of a decent living standard without working.

Like the East Germans, the Palestinians would be better served by their well-intentioned donors if financial assistance could be converted from a handout into a hand up the ladder of self-sufficiency.

Still, there are those television images of hungry children and distraught mothers that quite properly make it impossible for the EU and the US to cut off all humanitarian assistance to the Palestinians. But it is not impossible for the donors to recognise the folly of blank undated cheques, and to take two steps that would turn perpetual charity into tough love.

First, aid should be made conditional on reform. The economist and New York Times columnist Paul Krugman, a darling of the Democratic Left, and his co-author, Maurice Obstfeld, list among the features holding back progress in developing countries ‘extensive direct government control of the economy ... government ... unable to pay for its heavy expenditures, [and] corrupt practices such as bribery and extortion’. All are in ample supply in the Palestinian territories, to the misfortune of the people over whom Hamas now rules.

Second, since it is politically unfeasible to demand that the Palestinians go cold turkey, the donors should tell them that aid will be reduced by, say, 10 per cent per year over the next ten years. Then, instead of stripping the pipes from the greenhouses that wealthy Jewish donors made available to them, Palestinians might realise that they must build a private sector economy capable of providing a decent standard of living for themselves, a stake too important to risk in a continuing war with Israel.

To make the continuation of aid on these terms acceptable to all parties, it can be made conditional on a continuation of Hamas’s truce, or whatever that organisation chooses to call its halt in terror operations. Hamas will not give up its pledge to destroy Israel, and the West will in the end be unable to withhold aid despite that continued belligerence. But the donors can regulate the flow of aid, cutting it off or reducing it if Hamas sponsors attacks on Israel, thereby rewarding good behaviour and penalising acts of terror. Not a perfect solution, but a workable one.

Irwin Stelzer is director of economic policy studies at the Hudson Institute and a columnist for the Sunday Times.