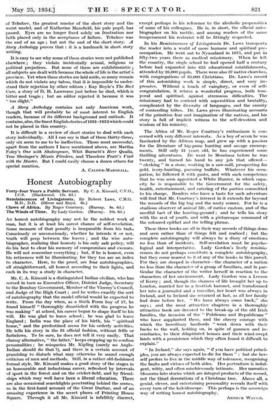 Ax honest autobiography may not; ;be the noblest work of man, but it is at least his surest chance of self-revelation. Some measure of that penalty is inseparable from his task. Consciously or unconsciously, whether he intends it or not, truth will peep between the leaves ; and the wise auto- biographer, realizing that honesty is his only safe policy, will do his best to clear his memory of compromises and excuses. He will not remember everything ; but, if he is honest, even his reticences will be illuminating, for they too are an index to character. Here, to the proof, are four autobiographies, all straightforward, all honest according to their lights, and each in its way a study in character.

Mr. C. A. Kincaid is a distinguished Indian civilian, who has served in turn as Executive Officer, District Judge, Secretary to the Bombay Government, Member of the Viceroy's Council, and Judge of the High Court ; and he writes exactly the sort of autobiography that the model official would be expected to write. From the day when, as a Sixth Form boy of 17, he found himself " thoroughly dissatisfied with the progress he was making " at school, his career began to shape itself to his will. He was glad to leave school ; he was glad to leave England ; India was the place of his birth, his " spiritual home," and the predestined arena for his orderly activities. He tells his story in the fit official fashion, without frills or furbelows. To be sure, he does not tell it very easily. That clumsy alternative, " the latter," keeps cropping up to confuse personalities ; he misquotes Mr. Kipling (surely no Anglo- Indian should do that ?), and there is a certain amount of grumbling to disturb what may otherwise be sound enough criticism of men and methods. Still, in a rather old-fashioned formal style, Mr. Kincaid makes a good story of the stages in an honourable and industrious career, refreshed by intervals of sport in the forest and on the cricket-field,- and by friend- ships which may well have been a liberal education. There are also occasional searchlights penetrating behind the scenes, as in the first-hand account of the Great Durbar, and of an amusing experience in the secret places of Printing House Square. Through it all Mr. Kincaid is infallibly discreet,

except perhaps in his reference to the alcoholic propensities of some of his colleagues. He is, in short, the official auto- biographer on his mettle, and among readers of the same temperament his restraint will be fittingly respected.

In his Reminiscences of Livingstonia Dr. Laws transports the reader into a world of more humane and spiritual pre- occupation. He went out to Nyasaland in 1875, and put in fifty-two years there as medical missionary. When he left the country, the single school he had opened half a century before had expanded into 655 educational establishments, attended by 26,000 pupils. There were also 37 native churches, with congregations of 33,000 Christians. Dr. Laws's record of this astonishing work is simple, direct, and very im- pressive. Without a touch of vainglory, or even of self. congratulation, it relates a wonderful progress, both tem. pond and spiritual, against strenuous difficulties. The missionary had to contend with superstition and brutality, complicated by the diversity of languages, and the enmity of contending tribes. Dr. Laws gives illuminating accounts of the primitive fear and imagination of the natives, and his story is full of implicit witness to the self-devotion and wisdom of his ministry.

The Africa of Mr. Roger Courtney's enthusiasm is con- cerned with very different interests. As a boy of seven he was fascinated by the African map, and grew up with a passion for the literature of big-game hunting and savage encamp- ments. Still only 31 years old, he has experienced some thrilling adventures. He went to Mombasa before he was twenty, and turned his hand to any job that offered- " clerking " in a store, working in a saw-mill, prospecting for gold, ivory-hunting, pursuing buffalo. Whatever his occu- pation, he followed it with gusto, and with such competence that he was soon appointed a White Hunter, in which capa- city he is responsible to the Government for the safety, health, entertainment, and catering of the parties committed to his charge. Readers who have a taste for such adventure will find that Mr. Courtney's interest in it extends far beyond the records of the big bag and the nasty corner. For he is a studious observer of animal life, of native custom, and of the needful tact of the hunting-ground ; and he tells his story with the zest of youth, and with a picturesque command of the coloured epithet and the telling phrase.

These three books are all in their way records of things done and seen rather than of things felt and realized ; but the complete autobiography will always be a diary of emotions no less than of incidents. Self-revelation must be psycho- logical and interpretative. Lady Gordon's lively reminis- cences do not perhaps constitute a complete autobiography, but they come nearest to it of any of the books in this parcel. For they are steeped in character—the character of a nation no less than the character of a group of familiars, and in par- ticular the character of the writer herself in reaction to the characters of her environment. Lady Gordon was a Leeson of. Kerry ; and, though the chances of life brought her up to London, married her to a Scottish baronet, and transformed her into a journalist and a traveller, her heart was always in Ireland, and to Ireland she returned at last, as all her family had done before her. " We have always come back," she says ; and the most attractive chapters in a thoroughly attractive book are devoted to the break-up of the old Irish families, the invasion of the " Publicans and Republicans " who have supplanted them, and the cheery courage with which the hereditary landlords " went down with their backs to the wall, holding on, in spite of gunmen and in- cendiaries, to their dilapidated houses and their wind-swept lands with a persistence which they often found it difficult to explain."

" In Ireland," she says again, " if you have political princi- ples, you are always expected to die for them " ; but she her- self prefers to live in the middle way of tolerance, recognizing the faults and virtues of both sides. Her portraiture is indul- gent, witty, and often mischievously intimate. Her narrative blossoms into stories which are integral products of the record, not the tinsel decorations of a Christmas tree. Above all, a genial, clever, and entertaining personality reveals itself with every turn of the kaleidoscope. This perhaps is the sovereign way of writing honest autobiography.