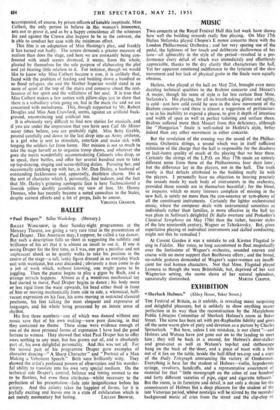 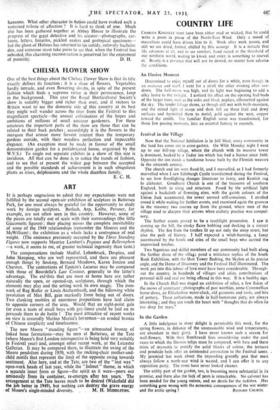 Britain, as it unfolds, is revealing many surprising and delightful pleasures, but is unlikely to show anything nearer perfection in its way than the reconstruction by the Marylebone Public Libraties Committee of Sherlock Holmes's room in Baker Street. The scene has been set with pre-Raphaelite fidelity and gives off the same warm glow of piety and devotion as a picture by Charles Spencelayh. "But here, unless I am mistaken, is our client "—and Holmes and Watson have just gone out on to the landing to meet him ; they will be back in a second, for Holmes's deer-stalker and great-coat as well as Watson's top-hat and stethoscope hang on the back of the 'door, and a piece of toast with a bite out of it lies on the table, beside the half-filled tea-cup and a copy of the Daily Telegraph announcing the victory of Omdurman. Everything is here for the student of Holmes—violin, hypodermic syringe, revolvers, handcuffs, and a representative assortment of material for that "little monograph on the ashes of one hundred and forty different varieties of pipe, cigar and cigarette tobacco." But the room, in its furniture and detail, is not only a shrine for the connoisseurs of Holmes but a deep pleasure for the student of the late Victorian period, whOse nostalgia will be stirred by the recorded background music of cries from the street and the clip-clop of

hansoms. What other character in fiction could have evoked such a sustained tribute of affection ? It is hard to think of one. Much else has been gathered together at Abbey House to illustrate the progress of the mat detective and his creator—photographs, car- toons, letters, firearms, pickled snakes and geological specimens— but the ghost of Holmes has returned to his untidy, unlovely bachelor den, and someone must take pains to see that, when the Festival has subsided, this charming reconstruction is preserved for the enjoyment