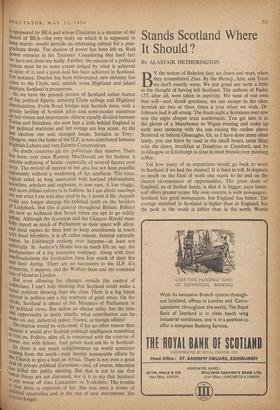 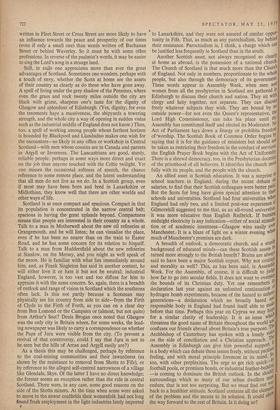 Stands Scotland Where It Should?

BY ALASTAIR HETHERINGTON Yet how many of us expatriates would go back to work in Scotland if we had the chance? It is hard to tell. It depends so much on the kind of work one wants to do and on the chance circumstance of opportunities. The great draw of England, as of farther lands, is that it is bigger, pays better, and offers greater scope. My own concern is with newspapers. Scotland has good newspapers. but England has better. The average standard in Scotland is higher than in England, but the peak in the south is loftier than in the north. Words written in Fleet Street or Cross Street are more likely to have an influence towards the peace and prosperity of our times (even if only a small one) than words written off Buchanan Street or behind Waverley. So it must be with some other professions. In reverse of the psalmist's words, it may be easier to sing the Lord's song in a strange land.

Still, in exile one appreciates more than ever the great advantages of Scotland. Sometimes one wonders, perhaps with a touch of envy, whether the Scots at home see the assets of their country as clearly as do those who have gone away. A spell of living under the grey shadow of the Pennines, where even the grass and rock twenty miles outside the city are black with grime, sharpens one's taste for the dignity of Glasgow and splendour of Edinburgh. (Yes, dignity; for even the tenements haye a massiveness, the shipyards a towering strength, and the whole city a way of opening in sudden vistas such as the industrial middle of England does not know.) Then, too, a spell of working among people whose farthest horizon is bounded by Blackpool and Llandudno makes one wish for the encounters—so likely in any office or workshop in Central Scotland—with men whose cousins are in Canada and parents in Argyll or Inverness. The Lancastrians are good, sturdy, reliable people; perhaps in some ways more direct and exact on the job than anyone touched with the Celtic twilight. Yet one misses the occasional softness of speech, the chance reference to some remote place, and the latent understanding that all men do not live as we do. In a Scottish group, even if most may have been born and bred in Lanarkshire or Midlothian, they know well that there are other worlds and other ways of life.