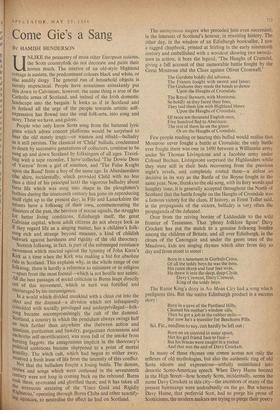 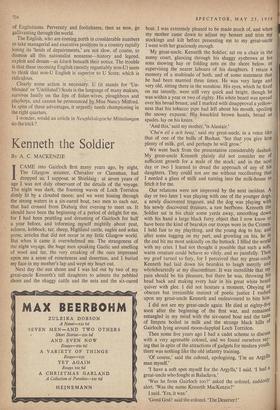 By HAM1SH HENDERSON UNL1KE the peasantry of most other European nations, the Scots countryfolk do not decorate and paint their homes much. The interior of an old-style Highland cottage is austere, the predominant colours black and white, or else seedily dingy. The general run of household objects is sternly impractical. People have sometimes mistakenly put this down to Calvinism; however, the same thing is true of the Catholic areas of Scotland, and indeed of the Irish domestic landscape into the bargain. It looks as if in Scotland and in Ireland all the urge of the people towards artistic self- expression has flowed into the oral folk-arts, into song and story. These we have, and galore.

People who only know Scots song from the battered lyric gems which adorn concert platforms would be surprised to hear the old stately tragic—or wanton and ribald—balladry aS it still persists. The classical or 'Child' ballads, condemned to death by successive generations of collectors, continue to be sung up and down Scotland by folksingers of all ages. Travel- ling with a tape recorder. I have collected 'The Dowie Dens of Yarrow' from a girl of nineteen, and 'The False Knight Upon the Road' from a boy of the same age. in Aberdeenshire (the shire, incidentally, which provided Child with no less than a third of his principal text) the vigorous balladry about farm life which was sung into shape in the ploughmen's bothies during the nineteenth century has gone on reproducing itself right up to the present day; in Fife and Lanarkshire the miners have a folksong of their own, commemorating the disasters of the past, the heroism of rescue squads, the struggles for better living conditions. Edinburgh itself, the great Calvinist capital, whose adult citizens do not always look as if they regard life as a singing matter, has a children's folk- song rich and strange beyond measure, a kind of childish bulwark against harshness and rigidity of the old theocracy. Scottish folksong, in fact, is part of the submerged resistance Movement which reacted against the tyranny of John Knox's Kirk at a time when the Kirk was making a bid for absolute rule in Scotland. This explains why, in the whole range of our folksong, there is hardly a reference to ministers or to religion —apart from the most formal—which is not hostile nor satiric. All the best passages of social criticism in Burns leapt directly out of this movement, which in turn was fortified and encouraged by his intransigence. In a world which divided mankind with a clean cut into the elect and the damned—a .division which not infrequently coincided with socially privileged and underprivileged—folk- SOng became uncompromisingly the cult of the damned. Scotland, a country in which the pendulum always swings half `in inch farther than anywhere else (between action and quietism, puritanism and bawdry, gargantuan riotousness and anchorite self-mortification), was soon full of the smoke frOm burning faggots; the antagonisms implicit in the theocracy's Pc'litical ambitions became sh4rpened to a point of mortal hostility. The _witch cult, which had begun to wither away, received a fresh lease of life from the intensity of this conflict. Not that the balladers fought a losing battle. The dances, stories and songs which were outlawed in the seventeenth e,entury were not long in coming back on the rebound. Burns ;°, ok them, re-created and glorified them; and it has taken all IF strenuous straining of the 'Chico Guid and Rigidly .Kighteous.' operating through Burns Clubs and other sanctify- ing agencies, to neutralise the effect he had on Scotland. The anonymous singers who preceded him even succeeded. in the interests of Scotland's honour, in rewriting history. The other day, in the window of an Edinburgh bookseller, I saw a ragged chapbook, printed at Stirling in the early nineteenth century and embellished with a woodcut showing tvo swords- men in action; it bore the legend, 'The Haughs of Crumdel, giving a full account of that memorable battle fought by the Great Montrose ahd the Clans against Oliver Cromwell.'

The Gordons boldly did advance, The Frasers fought with sword and lance; The Grahams they made the heads 0 dance Upon the Haughs of Cromdale.

The Royal Stewarts, with Montrose, So boldly as they faced their foes, They laid them low with Highland blows Upon the Haughs of Cromdale.

Of twice ten thousand English men, Five hundred fled to Aberdeen: The rest of them lie on the green Or on the Haughs of Cromdale.

Few people reading or healing this ballad would realise that Montrose never fought a battle at Cromdale; the only battle ever fought there was one in 1690 between a Williamite army under Sir Thomas Livingstone and a Jacobite army under Colonel Buchan. Livingstone surprised the Highlanders while they Were still in their beds recovering from the previous night's revels, and completely routed them—a defeat as decisive in its way as the Battle of the Boyne fought in the same year. Now, thanks to the old song, with its fiery words and haughty tune, it is generally accepted throughout the North' of Scotland that the battle fought on the Haughs of Cromdale was a famous victory for the clans. If history, as Ernst Toiler said, is the propaganda of the victors, balladry is very often the propaganda of the defeated.

Over from the relying border of Liddesdale to the wild frontier of Tennessee. That 'phony folklore figure' Davy Crockett has put the match to a genuine folksong bonfire among the children of Britain; and all over Edinburgh, in the closes of the Canongate and under the green trees of the Meadows, kids are singing rhymes which alter from day to day and from street to street: Born in a tenement in Gorbals Cross, Of all the teddy boys he was the boss. His razor sharp and four feet wide. He threw it into the deep, deep Clyde.

The Razor King's doxy in No Mean City had a song which prefigures this. But the native Edinburgh product is a success story :

Born in a cave of the Pentland Hills, Cleaned his mother's window sills.

Then he got a job in the rubber mills—

But now he's a traveller for Beechams Pills,

Sci. Fic., needless to say, can hardly be left out : Born on an asteroid in outer space, Met his girl friend face to face— But his braces were caught in a rocket And that was the end of Davy Crockett.

In many of these rhymes one comes across not only the reflexes of old mythologies, but also the authentic ring of old Scots idioms and expressions—artfully assimilated into demotic Scoto-American speech. When Davy Hume boozed in the High Street—how homely Scots, incidentally, seems the name Davy Crockett in this city—the ancestors of many of the present bairnsangs were undoubtedly on the go. But whereas Davy Hume, that perfervid Scot, had to purge his prose df Scotticisms, the modern makars are trying to purge their poetry

of Englishisms. Perversity and foolishness, then as now, go gallivanting through the world.

The English, who are coming north in considerable numbers to take managerial and executive positions in a country rapidly losing its 'heids of depairtments,' are not slow, of course, to dismiss all this nationalist nonsense—history and legend, exploit and dream—as kitsch beneath their notice. The trouble is that these incoming English (mostly regrettably non-U) seem to think that non-U English is superior to U Scots; which is ridiculous.

Clearly some action is necessary. U (it stands for 'Un- blended' or 'Undiluted') Scots is the language of many makars, survives lustily on the lips of fisher-wives, ploughboys and playboys, and cannot be pronounced by Miss Nancy 'Mitford. In spite of these advantages, it urgently needs championing in the right quarters.

I wonder, would an article in Neuphilelogische Mitteilungen do the trick?