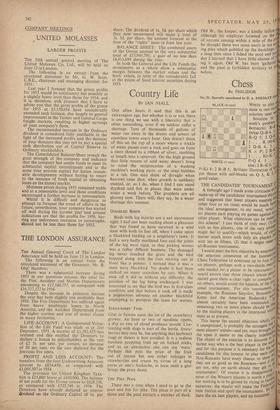 THE CANDIDATES' TOURNAMENT,.(Iti A fortnight ago I made some criticisms °Jo make-up of the candidates' tournament tnis,) and suggested that fewer players meeting "„ej other four or six times would be much he't, the ideal arrangement, to my mind, would.ef six players each playing six games against eAl' other player. What objections can be raiscuo this scheme? I can think of only two: (I) with so few players, one of the very str°r1,70 might fail to qualify—which would, of c0`10; matter much more with only six players 10 with ten or fifteen, (2) that it might InetIn all-Russian tournament.

I would meet the first objection by emPo7,0 the selection committee of the Interrant',1"0 Chess Federation to nominate up to four rit six players, perhaps with a two-thirds 1118,I°10i vote needed for a player to be nominaten:00 would ensure that those players whose ge record gave them a clear right to comPe,0 no others, would avoid the hazards of the ".(0 zonal tournament. For this tournament' 01, example, the Russians Smyslov, Bronsieind Keres and the American ReshevskY almost certainly have been nominated. 00 remaining two or more places should be 1,0 by the leading players in the Interzonal 1011'

This leaves the second objection which,it il unexpressed, is probably the strongest Olio!, most players' minds—and yet, once brought 1,14 the open it seems to me clearly indelen.510 The object of the exercise is to discover iltij fairest way who is the best player in the °vs and for this purpose it is necessary for thelie candidates for this honour to play each °Itio Non-Russians have every chance to sno,v,. they are as good as the Russians—and 1:1 to are not, why on earth should they get tournament? Of course it is disapPnitce, none of the Western players is worth a "boi but nothing is to be gained by trying to ourselves: the results will make the FederI/141' look foolish 'and spoil the tournament. S° have the six best players, and no nonsense'