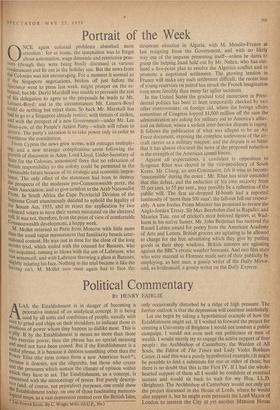 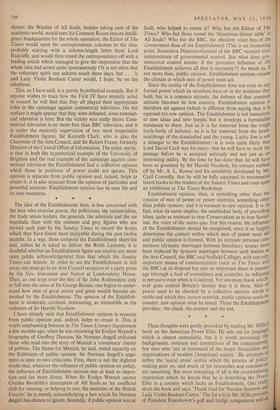 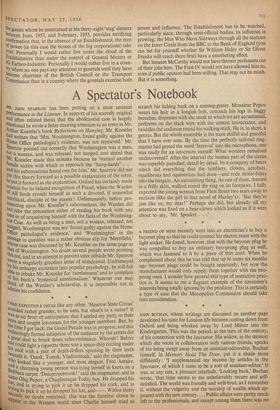 BY HENRY FAIRLIE LAS. the Establishment is in danger of becciming a pejorative instead of an analytical concept. It is being used by all sorts and conditions of people, usually with aXes to grind and chips on their shoulders, to indicate those in positions of power whom they happen to dislike most. This is _4,PtlY. If by the Establishment is meant no more than those no exercise power, then the phrase has no special meaning alld need not have been coined. But if the Establishment is a tipseful phrase, it is because it denbtes something other than the bower Elite (the term comes from a new American book*), ecause it denotes, not the oligarchs, but those who create !Id. the pressures which sustain the climate of opinion within cwilloh they have to act. The Establishment, as a concept, is t.°Ileerned with the meteorology of power. For purely descrip- lye (and, of course, not pejorative) purposes, one could show i'le.Establishment today. on one of those fascinating meteor°. "cal maps, as a vast depression centred over the British Isles, Tim POWER ELITE. By C. Wright Mills. (0.U.P, 30s.) only occasionally disturbed by a ridge of high pressure. The further outlook is that the depression will continue indefinitely.

Let me begin by taking a hypothetical example of how the Establishment might act. If I wished to forward the project for creating a University of Brighton I would not conduct a public campaign. I would not even seek out politicians or men of wealth. I would merely try to engage the active support of four people : the Archbishop of Canterbury, the Warden of All Souls, the Editor of The Times and Lady Violet Bonham Carter. (I said this was a purely hypothetical example.) It might be possible to find a substitute for one or other of these, but there is no doubt that this is the First IV. If I had the whole- hearted support of them all I would be confident of eventual success and would sit back to wait for my Hon. LL.D. (Brighton). The Archbishop of Canterbury would not only get the project discussed in the House of Lords, where he would also support it, but he might even persuade the Lord Mayor of London to interest the City at yet another Mansion House dinner; the Warden of All Souls, besides taking care of the academic world, would turn his Common Room into an intelli- gence headquarters for the whole operation; the Editor of The Times would open his correspondence columns to the idea, probably starting with a column-length letter from Lord Radcliffe, and would then round the correspondence off with a leading article which managed to give the impression that the whole idea had arisen quite spontaneously ('It is not often that the voluntary spirit can achieve much these days, but . . .'); and Lady Violet Bonham Carter would, I hope, be on the telephone.

This, as I have said, is a purely hypothetical example. But if anyone wishes to trace how the First IV have recently acted in concert he will find that they all played their appropriate roles in the campaign against commercial television. On the surface it might appear that they were defeated, since commer- cial television is here. But the victory was really theirs. Com- mercial television is no more free than BBC television, and it is under the matronly supervision of two most respectable Establishment figures, Sir Kenneth Clark, who is also the Chairman of the Arts Council, and Sir Robert Fraser, formerly Director of the Central Office of Information. The point, surely, is that in both the hypothetical example of the University of Brighton and the real example of the campaign against com- mercial television the Establishment had a collective opinion which those in positions of power could not ignore. This opinion is separate from public opinion and, indeed, helps to create it; it is also separate from the opinion of particular and powerful interests. Establishment opinion has its own life and its own resources.

The idea of the Establishment, then, is less concerned with the men who exercise power, the politicians, the industrialists, the trade union leaders, the generals, the admirals and the air marshals, than with the eminent and grey figures who are invited each year by the Sunday Times to record the books which they have found most enjoyable during the past twelve months. In a way, these compose the Establishment short-list and, unless he is asked to deliver the Reith Lectures, it is doubtful whether an Establishment figure can receive any more open public acknowledgement than that which the Sunday Times can bestow. In order to see the Establishment in full array one must go to an Arts Council reception or a party given by the New Statesman and Nation at Londonderry House. Then, as one trips over the feet of Sir John Rothenstein only to fall into the arms of Sir George Barnes. one begins to under- stand how men of great power and great wealth become en- meshed by the Establishment. The opinion of the Establish- ment is moderate, civilised, insinuating, as irresistible as the cadences of Sir Harold Nicolson.

I have already said that Establishment opinion is separate from public opinion and. indeed, helps to create it. This is worth emphasising because in The Times Literary Supplement a few months ago, when he was reviewing Sir Evelyn Wrench's biography of Geoffrey Dawson, Sir Norman Angell criticised those who read into the story of Munich a `conspiracy' theory of politics. The blame for MUnich, he said, rested squarely on the flabbiness of public opinion. Sir Norman Angell's argu- ment is open to two criticisms. First, there is not the slightest doubt that, whatever the influence of public opinion on policy, the influence of Establishment opinion was at least as impor- tant and far more direct. When Sir Evelyn Wrench quotes Charles Brodribb's description of All Souls as `an unofficial club for running, or helping to run, the destinies of the British Empire,' he is merely acknowledging a fact which Sir Norman Angell has chosen to ignore. Secondly, if public opinion was at fault, who helped to create it? Who but the Editor of The Times? Who but those round the 'disastrous dinner table' at All Souls? Who but the BBC, the obedient voice less of the Government than of the Establishment (This is an interesting point. Successive Directors-General of the BBC vaunted their independence of governmental control. But what does gov- ernmental control matter, if the pervasive influence of the Establishment achieves all that is necessary?) As much as, if not more than, public opinion, Establishment opinion creates the climate in which men of power must act, Since the reality of the Establishment does not exist in anY formal power which its members have or in the positions they hold, but in a common attitude, the defence of that common attitude becomes its first concern. Establishment opinion is therefore set against (which is different from saying that it is opposed to) new opinion. The Establishment is not insensitive to new ideas and new trends, but it develops a formidable resistance to them. Just as it is far removed from the rough hurly-burly of industry, so it is far removed from the heart- searchings of the dissatisfied and the young. Lucky Jim is not a stranger to the Establishment—it is even quite likely that Lord David Cecil was his tutor—but he will have to work his passage before he is accepted seriously and not just as an interesting oddity. By the time he has done that, he will have been so groomed by Sir Harold Nicolson, his corners rubbed off by Mr. A. L. Rowse and his sensibility developed by Mr. Cyril Connolly, that he will be fully equipped to recommend travel books to the readers of the Sunday Times and even open an exhibition at The Times Bookshop.

Establishment opinion, then, is something other than the opinion of men of power or power interests; something other than public opinion; and it is resistant to new opinion. It is in fact, what its name implies, the established body of prevailing ideas, quite as resistant to true Conservatism as to true Social- ism, the voice of the status quo. For this reason, the influence of the Establishment should be recognised, since it so largelY determines the context within which men of power must act and public opinion is formed. With its intricate personal con' nections (dynastic marriages between hereditary houses have been replaced by dynastic marriages between such bodies as the Arts Council, the BBC and Nuffield College), with not °MY important means of communication (such as The Times and the BBC) at its disposal but also an important share in patron. age (through a host of committees and councils), its influence is pervasive even when it is indirect. Yet one must thank which: ever gods control Britain's destiny that it is there. Men cr power need to be checked by a collective opinion which '5 stable and which they cannot override; public opinion needs its counter; new opinion must be tested. These the Establishment provides : the check, the counter and the test.

These thoughts were partly provoked by reading Mr. Mills's book on the American Power Elite. He sets out (in language which is almost unreadable, but it is worth persisting) the backgrounds. instincts and connections of the comparatively few men who 'are- in command of the major hierarchies an'' organisations of modern [American] society.' He attempts to define the 'social areas' within which the process of policy - making goes on, and much of his researches and conclusions are rewarding. But most rewarding of all is the overwhelming impression which he leaves that he is describing the Power Elite in a ,country which lacks an Establishment. One reall.); shuts the book and says, 'Thank God for Warden Sparrow an° Lady Violet Bonham Carter.' The list which Mr. Mills provides, of President Eisenhower's golf and bridge companions and 01 the guests whom he entertained at his thirty-eight 'stag' dinners oetween June, 1953, and February, 1955, provides terrifying °°,11firmation that, in the absence of an Establishment, the men nt Power (in this case the bosses of the big corporations) take over. Personally I would rather live under the cloud of the tstablishment than under the control of General Motors or IG Farben-Industrie. Personally I would rather live in a coun- ,trY Where no one pays any attention to generals until they have occome chairmen of the British Council or the Transport ConMission than in a country where the generals exercise both power and influence. The Establishment has to be watched, particularly since, through semi-official bodies, its influence is growing: the Men Who Move Sideways through all the stations on the Inner Circle from the BBC to the Bank of England (you can bet for yourself whether Sir William Haley or Sir Oliver Franks will reach there first) have a smothering effect.

But Senator McCarthy would not have thrown professors out of their jobs here. The First IV would not have allowed him to, even if public opinion had been willing. That may not be much. But it is something.