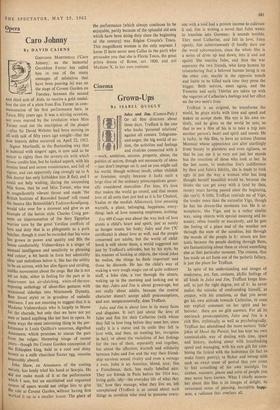 By ISABEL QUIGLY Jules and Jim. (Cameo-Poly.) OF all film directors about these days, Truffaut is the one who backs 'personal relations' against all comers. Telegrams- and-anger, the big world of ac- tion, the activities and feelings and rivalries connected with it

—work, ambition, success, property, status, the politics of action, though not necessarily of ideas —just don't impinge on it, and so you might call his world, though without insult, either childish or feminine, simply because it lacks such a large slice of the ordinary preoccupations gener- ally considered masculine. For him, it's love that makes the world go round, and that means love of all sorts (not just bed as it is for Chabrol, Vadim or the modish Albicocco), love meaning warmth, a place, belonging, happiness, every- thing; lack of love meaning emptiness, nothing.

Les 400 Coups was about the way lack of love stunts a child's heart and spirit, just as surely as hunger stunts his body; Jules and Jim ('X' certificate) is about love as well, and the people concerned are adults, but the world of child- hood is still about them, a world suggested not just by Truffaut's attitudes, but by his style, by his manner of looking at objects, the visual jokes he makes, the things he finds important and those he discards. He has the child's way of making a very tough magic out of quite ordinary stuff, a 'bike ride, a run through the streets, waking up in the morning and looking out at the day. Jules and Jim is about grown-ups, but not really about adults, because the central character doesn't accept adult preconceptions, and nor, temperamentally, does Truffaut.

Jules and Jim is about love in its many faces and disguises. It isn't just about the love of Jules and Jim for their Catherine (with whom they fall in love long before they meet her, since really it is a statue and its smile they fall in love with, and then, on meeting her, recognise in her), or about the variations of her feelings for the two of them, separately and together, but about the affection, warmth and solidarity between Jules and Jim and the way their friend- ship survives sexual rivalry and even a menage trois. Jules is an Austrian, blond, nice; Jim a Frenchman, dark, less easily labelled nice. They are friends in Paris before the 1914 war, living gaily, idly--the everyday life of what they 'do,' how they manage, what they live on, left unexplained (Truffaut is as casual about such things as novelists who used to presume every-

one with a soul had a private income to cultivate it on). Jim is writing a novel that Jules wants to translate into German: it sounds terrible. They meet Catherine, and fall in love, Jules openly, Jim subterraneanly (I hardly dare use the word subconscious, since the whole film is a series of dives up and down, into it and out again). She marries Jules, and then the war separates the two friends, who keep human by remembering that a beloved human being is on the other side, maybe in the opposite trench and liable to be killed each time they press the trigger. Both survive, meet again, and the Twenties and early Thirties are taken up with the vagaries of Catherine's feelings and her effect on the two men's lives.

Truffaut is an original, he transforms the world, he plays tricks with time and speed and makes us accept them. His eye is his own en- tirely, and he gives us the world he sees, so that to see a film of his is to take a trip into another person's heart and spirit and senses. He is lucky, in this film, to have an actress (Jeanne Moreau) whose appearance can alter startlingly from beauty to plainness and even ugliness, so that he can use it to vary not just her moods but the reactions of those who look at her. In the last scene, to underline Jim's indifference by then and Jules's fidelity, she is made to look ugly in just the way a woman who has long thought herself beautiful would be, because she thinks she can get away with it (and by then, twenty years having passed since the beginning, she can't). A little, Truffaut reminds me of Vigo, the tender more than the surrealist Vigo, though he has his dream-like moments too. He is at- mospheric, like Vigo, and in a rather similar way, using objects with special meaning and in- tensity, often funnily or macabrely, and he gets the feeling of a place and of the weather not through the state of the sunshine, but through the moods of the people in it: streets are fan- tastic because the people dashing through them, are fantasticating about them or about something else at that particular moment. The cinema, that has made an art form out of the pathetic fallacy, is just the place for Truffaut.

In spite of his understanding and images of tenderness, joy, fun, cosiness, idyllic feelings of all kinds in Jules and Jim, Truffaut keeps him- self, to just the right degree, out of it: he never makes the mistake of confounding himself, as creator, with his creations, so that you never get his own attitude towards Catherine, or even any explicit comment on her spirit and be- haviour: there are no glib answers. For all its one-track preoccupations, Jules and Jim is a rich film, stylistically as well as psychologically. Truffaut has abandoned the more esoteric 'little' jokes of Shoot the Pianist, but has kept his own unmistakable way of dealing with time, space and history, dashing about with breathtaking speed and managing, with his rare gift for com- bining the lyrical with the humorous (in fact to make funny poetry), to flicker and swoop with such an exact sense of period that you come to feel something of his own nostalgia for clothes, manners, places and sorts of people you may never have known. What I chiefly remem- ber about this film is its images of delight, its occasional sense of piercing, incredible happi- ness, a radiance that overlays all.