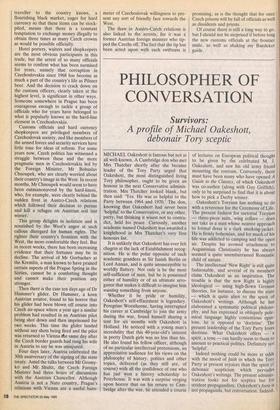 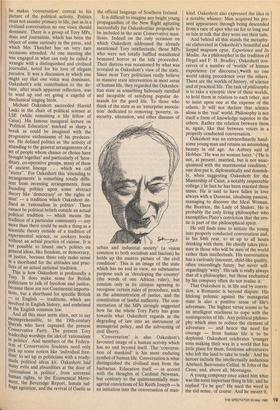 MICHAEL Oakeshott is famous but not at all well-known. A Cambridge don who met Mrs Thatcher shortly after she became leader of the Tory Party urged that Oakeshott, the most distinguished living Tory philosopher, ought to be given an honour in the next Conservative adminis- tration. Mrs Thatcher looked blank, but

then said: 'Yes. He was so helpful to the Party between 1964 and 1970.' The don, knowing that Oakeshott had never been 'helpful' to the Conservative, or any other, party, but thinking it wisest not to contra- dict, held his peace. Curiously, another academic named Oakeshott was awarded a knighthood in Mrs Thatcher's very first honours list.

It is unlikely that Oakeshott has ever felt chagrin at the lack of Establishment recog- nition. He is the polar opposite of such academic grandees as Sir Isaiah Berlin or Lord Annan, and is quite unsusceptible to worldly flattery. Not only is he the most self-sufficient of men, but he is possessed either of humility or of an ultimate arro- gance that makes it difficult to imagine him wanting something from anyone.

Whether it be pride or humility, Oakeshott's self-effacement is legendary. Peregrine Worsthorne, having interrupted his career at Cambridge to join the army during the war, found himself sharing a tent for six months with Oakeshott in Holland. He noticed with a young man's incredulity that this 40-year-old's interest in pretty Dutch girls was no less than his. He also found his fellow officer, although of no particular intellectual pretensions, an appreciative audience for his views on the philosophy of history, politics and other topics, delivered (as they still are, of course) with all the confidence of one who has just won a history scholarship to Peterhouse. It was with a surprise verging upon horror that on his return to Cam- bridge after the war, he attended a course

of lectures on European political thought to be given by the celebrated M. J. Oakeshott, and saw his old army friend mounting the rostrum. Conversely, there must have been many who have opened A Guide to the Classics, of which Oakeshott was co-author (along with Guy Griffith), only to be surprised to find that it is about how to pick a Derby winner.

Oakeshott's Toryism has nothing to do with a reverence for the Ceremony of Life. The present fashion for sartorial Toryism — three-piece suits, wing collars — does not take in a man whose nearest approach to formal dress is a dark smoking-jacket. He is firmly bohemian, and for much of his life was addicted to camping and the open air. Despite his avowed attachment to Augustinian Christianity he has always seemed a quite unembarrassed Romantic child of nature.

The intellectual 'New Right' is still quite fashionable, and several of its members claim Oakeshott as an inspiration. The trouble is that the new Right is highly ideological — using high-flown German theories, for instance, to discuss the state — which is quite alien to the spirit of Oakeshott's writings. Although he has elaborated a systematic political philoso- phy, and has expressed in obliquely pole- mical language highly contentious opin- ions, he is opposed to 'doctrine'. The present leadership of the Tory Party loves doctrine. What Oakeshott offers — a spirit, a tone — can hardly seem to them to amount to practical politics. Definitely not 'helpful'.

Indeed nothing could be more at odds with the mood of faith in which the TorY Party at present rejoices than the spirit ot debonair scepticism which pervades Oakeshott's writings. The present adminis- tration looks not for sceptics but for strident propagandists. Oakeshott's forte Is not propaganda, but conversation. Indeed.

he makes 'conversation' central to his picture of the political activity. Politics must not assume primacy in life, just as in a civilised conversation no one voice should dominate. There is a group of Tory MPs, dons and journalists, which has been the object of some curiosity in the press, and which Mrs Thatcher has on very rare occasions attended. At one meeting she was engaged in what can only be called a wrangle with a distinguished and civilised journalist, noted for his love of elegant paradox. It was a discussion in which one

might say .that one voice was dominant. Oakeshott's sole contribution to the de-

bate, after much apparent reflection, was to wind up and set going a cageful of mechanical singing birds.

Michael Oakeshott succeeded Harold Laski in the chair of political science at LSE (while remaining a life fellow of Caius). His famous inaugural lecture on `Political Education' marked as sharp a break as could be imagined with the Progressive enthusiasms of his predeces- sor. He defined politics as 'the activity of attending to the general arrangements of a set of people whom chance or choice have brought together' and particularly of 'here- ditary, co-operative groups, many of them of ancient lineage . . . which we call "states".' For Oakeshott this 'attending to arrangements' is something totally diffe-

rent from inventing arrangements, from founding politics upon some abstract

man' — a tradition which Oakeshott de- fined as 'rationalism in politics'. There

cannot be political beliefs outside an actual Political tradition — which means the tradition of a particular community — any More than there could be such a thing as a scientific theory outside of a tradition of experimental science, or cookery books without an actual practice of cuisine. It is not possible to found one's politics on general ideas, like freedom, or democracy, or justice, because these only make sense as a shorthand for the attitudes and prac- tices of an actual national tradition.

This is how Oakeshott is profoundly a Tory. It does make sense for British politicians to talk of freedom and justice, because these are not Continental importa- tions, but a shorthand for specific British or English — traditions, which are involved in English history, and enshrined in the English common law.

And all this must seem alien, not to say incomprehensible, to the 19th-century liberals who have captured the present Conservative Party. The present Tory leadership worships the idol of `rationalism M politics'. And members of the Federa- tion of Conservative Students need only pick up some notion like 'individual free- dom' to set up as politicians with a ready- made political ideas kit. Oakeshott laid Many evils and absurdities at the door of rationalism in politics', from universal human rights, to the Ecumenical Move- ment, the Beveridge Report, female suf- frage agitation, and the revival of Gaelic as the official language of Southern Ireland.

It is difficult to imagine any bright young propagandists of the New Right agitating successfully for Oakeshottian proposals to be included in the next Conservative man- ifesto. Indeed on the only occasion on which Oakeshott addressed the already mentioned Tory intellectuals, those MPs who were not totally baffled manifested bemused horror as the talk proceeded. Their distress was occasioned by what was revealed as Oakeshott's view of the state. Since most Tory politicians really believe in massive state intervention in most areas of human life, they regarded the Oakeshot- tian state as something hideously rarefied and incapable of satisfying popular de- mands for the good life. To those who think of the state as an 'enterprise associa- tion' dedicated to removing 'poverty, in- security, alienation, and other diseases of urban and industrial society' (a vision common to both socialism and fascism) he holds up the austere picture of `the civil condition'. This is an image of the state which has no end in view, no substantive purpose such as 'developing the country' (the words of one African ruler), but consists only in its citizens agreeing to recognise certain rules of procedure, such as the administration of justice, and the constitution of lawful authority. The con- sternation of the MPs strongly suggested how far the whole Tory Party has gone towards what Oakeshott regards as the degrading of law into an instrument of managerial policy, and the subverting of civil liberty.

`Conversation' is also Oakeshott's favoured image of a human activity which has no end beyond itself. The 'conversa- tion of mankind' is his most enduring symbol of human life. Conversation is what distinguished the civilised man from the barbarian. Education itself — in accord with the thoughts of Cardinal Newman, but contrary to the quintessentially man- agerial convictions of Sir Keith Joseph — is an initiation into the conversation of man-

kind. Oakeshott also expressed the idea in a notable whimsy: Man acquired his pre- sent appearance through being descended from a race of apes who sat for so long and so late in talk that they wore out their tails.

And behind all this stands the metaphy- sic elaborated in Oakeshott's beautiful and limpid magnum opus, Experience and Its Modes. As a philosopher in the tradition of Hegel and F. H. Bradley, Oakeshott con- ceives of a number of 'worlds' of human experience (or discourse), •with no one world taking precedence over the others. There are the worlds of history, of science and of practical life. The task of philosophy is to take a synoptic view of these worlds, to hold them in relation to each other, not to insist upon one at the expense of the others. It will not declare that science alone is the 'real' world. Philosophy is not itself a form of knowledge superior to the others. Rather the relation between them is, again, like that between voices in a properly conducted conversation.

Oakeshott was an extraordinarily hand- some young man and retains an astonishing beauty in old age. As Aubrey said of Hobbes: 'He was no woman hater.' (`He is not, at present, married, but is not unac- quainted with the matrimonial condition,' one don put it, diplomatically and donnish- ly, when suggesting Oakeshott for the Mastership of Caius, a notably respectable college.) In fact he has been married three times. He is said to have fallen in love always with a Dantean, idealising passion, managing to discover the Ideal Woman, the Beatrice, the Lady of Shalott. He is probably the only living philosopher who exemplifies Plato's conviction that the ero- tic is part of the philosophical spirit.

He still finds time to initiate the young into properly conducted conversation and, in his 84th year, to sit up to all hours drinking with them. He chiefly takes plea- sure in those who will be men of the world rather than intellectuals. His conversation has a curiously innocent, child-like quality, often exceedingly funny, but never self- regardingly 'witty'. His talk is really always that of a philosopher, but those enchanted by his company often do not realise it.

That Oakeshott is, in life and by convic- tion, a Romantic is beyond dispute. His lifelong polemic against the managerial state is also a positive sense of life's adventure. The highest virtue seems to be an intelligent readiness to cope with the contingencies of life. Any political philoso- phy which aims to reduce the element of adventure — and hence the need for courage — from human life is to be deplored. Oakeshott celebrates 'younger sons making their way in a world that has little place for them, footloose adventurers who left the land to take to trade'. And his heroes include the intellectually audacious Abelard, Benvenuto Cellini, St John of the Cross, and, above all, Montaigne.

A young. composer once asked him what was the most important thing in life, and he replied To be gay!' He used the word in

the old sense, of course. And he meant it.