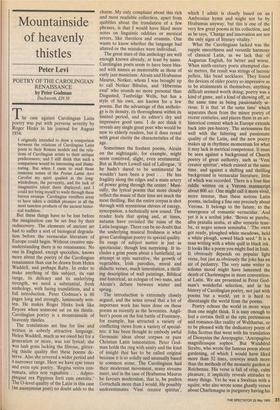 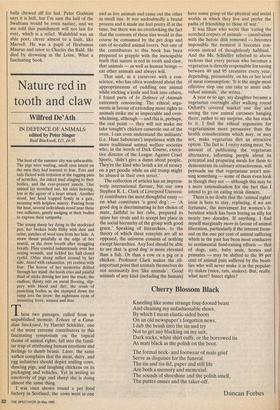 POETRY OF THE CAROLINGIAN RENAISSANCE by Peter Godman

The case against Carolingian Latin poetry was put with perverse severity by Roger Hinks in his journal for August 1934:

I originally intended to draw a comparison between the relations of Carolingian Latin poets to their Roman models and the rela- tions of Carolingian artists to their antique predecessors; and I still think that such a comparison would be interesting and illumi- nating. But when I came to read those immense tomes of the Poetae Latini Aevi Carolini my spirit quailed at the long- windedness, the perversity, and the lack of

imaginative talent there displayed; and I could not bring myself to wade through these

barren swamps. Carolingian versifiers seem to have taken a childish pleasure in all the most tasteless products of the ancient histor- ical tradition.

But these things have to be lost before the imagination can be set free by their rediscovery. The elements of ancient art had to suffer a sort of biological degrada- tion before the vernacular literature of Europe could begin. Without creative mis- understanding there is no renaissance. No one in England, except specialists, knows more about the poetry of the Carolingian renaissance than can be drawn from Helen Waddell, and perhaps Raby. In order to make anything of this subject, its vast range, its delicacy and its underlying strength, we need a substantial, fresh anthology, with facing translations, and a full introduction. Peter Godman's is 80 pages long and strongly, luminously writ- ten. He makes Roger Hinks look like Eeyore when someone sat on his thistle. Carolingian poetry is a mountainside of heavenly thistles.

The translations are line for line and written in soberly attractive language. Helen Waddell, much as we owed her for a generation or more, was too lyrical; she was lush grass lacking the fibrous, glitter- lag thistle quality that these poems de- serve. Also she covered a wider period and a narrower range. Here we have epic tones and even epic poetry. 'Regina vestra con- sumata , ultra non regnabitis . . . Adpro- pinquat rex Pippinus forti cum exercitu.' The 0-level quality of the Latin in this case (an anonymous poet) no doubt adds to the charm. My only complaint about this rich and most readable collection, apart from quibbles about the translation of a few phrases, is that I would have liked more notes on linguistic oddities or metrical errors, like theoticos and erumnis. One wants to know whether the language had altered or the mistakes were individual.

The great stars of this anthology are well enough known already, at least by name. Carolingian poets seem to have been bles- sed with names as memorable as those of early jazz musicians: Alcuin and Hrabamus Maurus, Notker, whom I was brought up to call Notker Bibulus, and 'Hibernius exul' who sounds no more personal than Disgusted, Tunbridge Wells, but has a style of his own, are known for a few poems. But the advantage of this antholo- gy is its density, its thoroughness within its limited period, and its editor's dry and impressive good taste. I do not think it reveals any single great poet who would be new to elderly readers, but it does reveal with great clarity the characteristics of the age.

Sometimes the freshest poems, Alcuin on the nightingale, for example, might seem contrived, slight, even sentimental. But as Robert Lowell said of Laforgue, 'if he hadn't dared to be sentimental he wouldn't have been a poet . . . He has fragility along the edges and a main artery of power going through the center.' Musi- cally, the lyrical poems that more closely reflect the music of their time are much the most thrilling. But the entire corpus is shot through with mysterious shivers of energy, syncopation, a technically new sound. The reader feels that spring and, at times, autumn have revisited the ruins of the Latin language. There can be no doubt that the underlying musical freshness is what gives Carolingian poetry its special quality.

Its range of subject matter is just as spectacular, though less surprising. It in- cludes a grim poem about a battlefield, an attempt at epic narrative, the growth of vegetables, Irish parodies, moral and didactic verses, much lamentation, a thrill- ing description of wall paintings, Biblical and historical, an eclogue of two nuns, and Alcuin's debate between winter and spring.

The introduction is extremely closely argued, and the notes reveal that a lot of important work has been done on these poems as recently as the Seventies. Angil- bert's poem on the lost battle of Fontenoy, for example, has attracted a variety of conflicting views from a variety of special- ists: it has been thought to embody awful Germanic ideas about corpses or pure Christian Latin lamentation. Peter God- man holds•the ring with sanity and the kind of insight that has to be called original because it is so solidly and unusually based in common sense. The Carolingians had their modernist movement, many streams meet, and in the case of Hrabamus Maurus he favours modernism, that is, he prefers Gottschalk more than I would. He possibly underestimates 'Veni creator spiritus', which I admit is closely based on an Ambrosian hymn and might not be by Hrabamus anyway, but this is one of the very few great poems in his collection, and as he says, 'Change and innovation are not the only signs of literary vitality.'

What the Carolingians lacked was the supple smoothness and versatile harmony of classical Latin, as we lack that of Augustan English, for better and worse.

When ninth-century poets attempted clas- sic metres, the result was strings of laconic pellets, like bead necklaces. They found the devices of older poetry so impressive as to be attainments in themselves; anything difficult seemed worth doing; poetry was a kind of game, and a kind of showing off, at the same time as being passionately se- rious. It is that 'at the same time' which separates them from the minor poetry of recent centuries, and places them in an art- historical context which in Europe extends back into pre-history. The seriousness fits

well with the faltering and passionate quality of the Latin, and the new poetry makes up in rhythmic momentum for what it may lack in metrical competence. It must be seen against a background of Church poetry of great authority, such as 'Veni creator spiritus', which existed at the same time, and against a shifting and thrilling background in vernacular literature, little of which was recorded. There is a four-line riddle written on a Verona manuscript about 800 AD. One might call it more vivid, more intense, than these serious Latin poems, including a fine one precisely about Verona. It belongs to the future, to the emergence of romantic vernacular. And yet it is a scribal joke. 'Boves se pareba, alba pratalia araba, et albo versorio tene- ba, et negro semen seminaba."The oxen got ready, ploughed white meadows, held a white plough, sowed black seed.' It is a man writing with a white quill in black ink. It looks like a poem you might find in Irish. It obviously depends on popular light verse, but just as obviously the joke has an air of pedantry. The very same writer in solemn mood might have lamented the death of Charlemagne in more convention- al Latin. We are presented in Peter God- man's wonderful selection, and in his history of Carolingian poetry, not just with poems but a world, yet it is hard to disentangle the world from the poems.

Poetry echoes the world in more ways than one might think. It is easy enough to feel a certain thrill at the epic pretensions and romance-like reality of Waltharius, or to be pleased with the dedicatory poem of John Scottus that went with his translation of Dionysius the Areopagite, 'Areopagites magnificusque sophos.' But Walahfrid Strabo, who wrote the famous poem about gardening, of which I would have liked more than 52 lines, conveys much more than the methods of the monastic garden at Reichenau. His verse is full of crisp, calm pleasure; it implicitly reveals attitudes to many things. Yet he was a Swabian with a squint, who also wrote some ghastly verses about Charlemagne in purgatory having his balls chewed off for lust. Peter Godman says it is hell, but I'm sure the hell of the Swabians would be even nastier, and we are told this punishment will not last for ever, which is a relief. Walahfrid was an able poet, clever almost to a fault, like Marvell. He was a pupil of Hrabamus Maurus and tutor to Charles the Bald. He died by drowning in the Loire.. What a fascinating book.