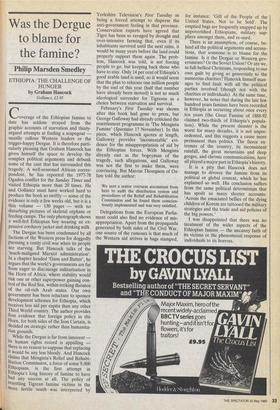 Was the Dergue to blame for the famine?

ETHIOPIA: THE CHALLENGE OF HUNGER by Graham Hancock Gollancz, £3.95 Coverage of the Ethiopian famine to

argued attempts at finding a scapegoat usually callous Western leaders or the trigger-happy Dergue. It is therefore parti- cularly pleasing that Graham Hancock has given himself the space to develop the complex political arguments and debunk some of the cant that has surrounded this tragedy. A well-seasoned African corres- pondent, he has reported the 1977-78 Ogaden conflict for the Sunday Times and visited Ethiopia more than 20 times. He and Gollancz must have worked hard to produce the book so swiftly — some of the evidence is only a few weeks old, but it is a thin volume — 130 pages — with no disturbing pictures of skeletal orphans or feeding camps. The only photograph shows a well-fed Ethiopian boy wearing an ex- pensive corduroy jacket and drinking milk.

The Dergue has been condemned by all factions of the Western press for doggedly pursuing a costly civil war when its people are starving. But Hancock talks of the 'much-maligned Marxist administration'. In a chapter headed 'Guns and Butter', he argues that the world's governments are far from eager to discourage militarisation in the Horn of Africa, where stability would risk one or other superpower gaining con- trol of the Red Sea, within striking distance of the oil-rich Arab states. Our own government has been reluctant to sponsor development schemes for Ethiopia, which receives less aid per capita than any other Third World country. The author provides firm evidence that foreign policy in the Horn, for both sides of the Iron Curtain, is decided on strategic rather than humanita- rian grounds.

While the Dergue is far from innocent — its human rights record is appalling - there is no reason to suppose that replacing it would be any less bloody. And Hancock Claims that Mengistu's Relief and Rehabi-

litation Commission, a force of some 9,000 Ethiopians, is the first attempt in Ethiopia's long history of famine to have

had any success at all. The policy of resettling Tigrean famine victims in the More fertile south was interpreted by

Yorkshire Television's First Tuesday as being a forced attempt to disperse the anti-government feeling in that province. Conservation experts have agreed that Tigre has been so ravaged by drought and over-intensive farming that, even if its inhabitants survived until the next rains, it would be many years before the land could properly support them again. The prob- lem, Hancock was told, is not forcing people to go, but keeping back those who have to stay. Only 14 per cent of Ethiopia's good arable land is used, so it would seem that the plan to relocate one million people by the end of this year (half that number have already been moved) is not so much ideological surrender for Tigreans as a choice between starvation and survival.

February's First Tuesday was shown after this book had gone to press, but George Galloway had already criticised the resettlement programme in 'The Mengistu Famine' (Spectator 17 November). In this piece, which Hancock quotes at length, Galloway provides 'incontestable' evi- dence for the misappropriation of aid by the Ethiopian forces. With Mengistu already cast as the bogeyman of the tragedy, such allegations, and Galloway was not the first to make them, were convincing. But Marcus Thompson of Ox- fam told the author:

We sent a senior overseas accountant from here to audit the distribution system and procedures of the Relief and Rehabilitation Commission and he found them conscien- tiously implemented and was very satisfied.

Delegations from the European Parlia- ment could also find no evidence of mis- appropriation. Apart from the propaganda generated by both sides of the Civil War, one source of the rumours is that much of the Western aid arrives in bags stamped, for instance: 'Gift of the People of the United States, Not to be Sold'. The emptied bags are frequently snapped up by impoverished Ethiopians, military sup- pliers amongst them, and re-used.

There is an assumption, of course, be- hind all the political arguments and accusa- tions, that someone is to blame for the famine. Is it the Dergue or Western gov- ernments? Or the Soviet Union? Or are we, as full-bellied Christians, responding to our own guilt by giving so generously to the numerous charities? Hancock himself man- ages to find fault with all the political parties involved (though not with the charities or individuals). At the same time, however, he notes that during the last few hundred years famines have been recorded in Ethiopia as occurring about once every ten years (the Great Famine of 1888-92 claimed two-thirds of Ethiopia's popula- tion). While the present disaster is the worst for many decades, it is not unpre- cedented, and this suggests a cause more permanent than politics. The fierce ex- tremes of the country, its inconsistent rainfall, the great mountains and deep gorges, and chronic communications, have all played a major part in Ethiopia's history.

It is a pity that Hancock does not manage to divorce the famine from its political or global context, which he has explained so well. His conclusion suffers from the same political determinism that has spoilt so many shorter accounts: 'Across the emaciated bellies of the dying children of Korem are tattooed the military strategies and the trade and aid policies of the big powers.'

Ethiopian famine — the uncanny faith of its victims or the phenomenal response of individuals to its horrors.