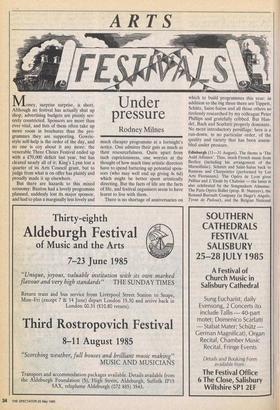 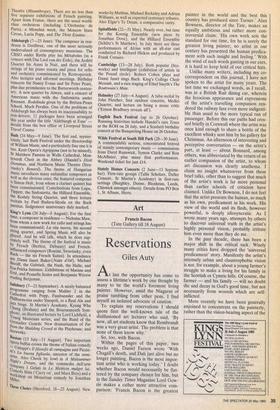 Money, surprise surprise, is short. Although no festival has actually shut up shop, advertising budgets are plainly sev- erely constricted. Sponsors are more than ever vital, and lists of them often take up more room in brochures than the pro- grammes they are supporting. Gowrie- style self-help is the order of the day, and no one is coy about it any more: the venerable Three Choirs Festival ended up with a £70,000 deficit last year, but has cleared nearly all of it; King's Lynn lost a quarter of its Arts Council grant, but to judge from what is on offer has plainly and proudly made it up elsewhere.

But there are hazards to this mixed economy: Buxton had a lovely programme planned, suddenly lost its major sponsor, and had to plan a marginally less lovely and much cheaper programme at a fortnight's notice. One admires their guts as much as their resourcefulness. Quite apart from such capriciousness, one worries at the thought of how much time artistic directors have to spend buttering up potential spon- sors (who may well end up giving 4s 6d) which might be better spent artistically directing. But the facts of life are the facts of life, and festival organisers seem to have learnt to live with them.

There is no shortage of anniversaries on which to build programmes this year: in addition to the big three there are Tippett, Schutz, Saint-Satins and all those others so tirelessly researched by my colleague Peter Phillips and gratefully cribbed. But Han- del, Bach and Scarlatti properly dominate. No more introductory persiflage: here is a run-down, in no particular order, of the quality and variety that has been assem- bled under pressure.

Edinburgh (11-31 August). The theme is 'The Auld Alliance'. Thus, much French music from Berlioz (including his arrangement of the Marseillaise), Schmitt and Saint-Satins back to Rameau and Charpentier (performed by Les Arts Florissants). The Opera de Lyon gives Pelleas and L'Etoile by Chabrier — the latter is also celebrated by the Songmakers Almanac. The Paris Opera Ballet (prop. R. Nureyev), the Renaud-Barrault Company (in Hugo's Angelo, Tyran de Padoue), and the Belgian National

Theatre (Misanthrope). There are no less than five separate exhibitions of French painting.

Apart from France, there are the usual world- class orchestras (including L'Orchestre de Paris), a Menuhin week, the Moscow State Circus, Lucia Popp, and The Thrie Estaites. Aldeburgh (7-23 June). The composer in resi- dence is Dutilleux, one of the most seriously undervalued of contemporary musicians. The CBSO under Rattle play his Maaboles (in a concert with Das Lied von der Erde), the Arditti Quartet his Aussi la Nuit, and there will be airings of his piano sonata and piece for cello and orchestra commissioned by Rostropovich. Also lectures and informal meetings. Birthday concerts for Nancy Evans and Sir Peter Pears, plus due prominence to the Butterworth centen- ary. A new quartet by Alwyn, and a concert of American music with the Sinfonietta under Knussen. Rodelinda given by the Britten-Pears School. Much Perahia. One of the problems of Aldeburgh has always been its inaccessibility to non-drivers; 11 packages have been arranged this year under the title 'Aldeburgh at Ease' details from the box office or Liverpool Street Travel Centre.

Bath (24 May-9 June). The first and, myster- iously, last Bath Festival under the directorship of William Mann, and a particularly fine one it is too. Kent Opera's Agrippina (not to be missed), St Matthew Passion in Wells Cathedral, Mon- teverdi Choir in the Abbey (Handel's Dixit Dominus, and Northern Music Theatre (Stra- vinsky's Renard). The theme of Hungarian music introduces many unfamiliar composers as well as the obvious ones; the featured composer is Simon Holt, from whom a clarinet quintet has been commissioned. Contributions from Lupu, TiPpett, the Sinfonietta, the Hilliard Ensemble, the Kodaly String Quartet, and three lecture recitals by Paul Badura-Skoda on the Bach Partitas. Sedgemoor anniversary duly marked. King's Lynn (26 July-3 August). For the first time, a composer in residence — Nicholas Maw, from whom a new work for cello and strings has been commissioned; La vita nuova, his second string quartet, and Spring Music will also be played. And he will talk, which he does sup- remely well. The theme of the festival is music by French (Berlioz, Debussy) and French- influenced composers (Rossini, Stravinsky, even Bach — the six French Suites). In attendance „are Dame Janet Baker (Nuits d'ete), Michael sten*, the Gabrieli, the Nash, the Halle, and Br.,sa-Pekka Salonen. Exhibitions of Matisse and Ertl, and Prunella Scales and Benjamin Witrow reading Betjeman.

Salisbury (7-21 September). A nicely balanced Programme ranging from Mahler 2 in the Cathedral with Popp, Fassbaender and the Philharmonia under Sinopoli, to a Real Ale and jazz binge. St Martin's Academy, Kyung Wha Chung (Brahms) and the Bournemouth Sym- phony, an illustrated lecture by Lord Lichfield, a bung Musicians series, and the Band of the Grenadier Guards. New dramatisation of Far from the Madding Crowd at the Playhouse, and fireworks.

Spitalfields (22-31 May). Nearly over, but time for the Koenig Ensemble (new piece by Jonathan Dove), and the Hilliard Ensemble (Schiltz's St Matthew). In July there are three performances of Alcina with an all-star cast conducted by Richard Hickox and produced by Frank Corsaro.

English Bach Festival (up to 26 October). Running festivities include Handel's rare Teseo at the ROH on 28 July, and a Scarlatti birthday concert at the Banqueting House on 26 October.