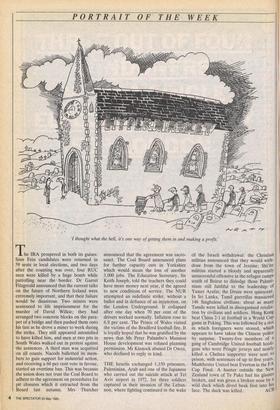 thought what the hell, it's one way of getting them in and making a profit.'

The IRA prospered in both its guises: Sinn Fein candidates were returned in 59 seats in local elections, and two days after the counting was over, four RUC men were killed by a huge bomb while patrolling near the border. Dr Garret Fitzgerald announced that the current talks on the future of Northern Ireland were extremely important, and that their failure would be disastrous. Two miners were sentenced to life imprisonment for the murder of David Wilkie; they had arranged two concrete blocks on the para- pet of a bridge and then pushed them onto his taxi as he drove a miner to work during the strike. They still appeared astonished to have killed him, and men at two pits in South Wales walked out in protest against the sentences. A third man was acquitted on all counts. Nacods ballotted its mem- bers to gain support for industrial action, and receiving a 60 per cent vote in favour, started an overtime ban. This was because the union does not trust the Coal Board to adhere to the agreement on procedures for pit closures which it extracted from the Board last autumn. Mrs Thatcher

announced that the agreement was sacro- sanct. The Coal Board announced plans for further capacity cuts in Yorkshire which would mean the loss of another 3,000 jobs. The Education Secretary, Sir Keith Joseph, told the teachers they could have more money next year, if the agreed to new conditions of service. The NUR attempted an indefinite strike, without a ballot and in defiance of an injunction, on the London Underground. It collapsed after one day when 70 per cent of the drivers worked normally. Inflation rose to 6.9 per cent. The Prince of Wales visited the victims of the Bradford football fire. It is loyally hoped that he was gratified by the news that Mr Peter Palumbo's Mansion House development was refused planning permission. Mr Kinnock abused Dr Owen, who declined to reply in kind.

THE Israelis exchanged 1,150 prisoners, Palestinian, Arab and one of the Japanese who carried out the suicide attack at Tel Aviv airport in 1972, for three soldiers captured in their invasion of the Leban- non, where fighting continued in the wake

of the Israeli withdrawal: the Christian militias announced that they would with- draw from the town of Jezzine; Shi'ite militias started a. bloody and apparently unsuccessful offensive in the refugee camps south of Beirut to dislodge those Palesti- nians still faithful to the leadership of Yasser Arafat; the Druze were quiescent. In Sri Lanka, Tamil guerrillas massacred 146 Singhalese civilians; about as many Tamils were killed in disorganised retalia- tion by civilians and soldiers. Hong Kong beat China 2-1 at football in a World Cup game in Peking. This was followed by a riot in which foreigners were stoned, which appears to have taken the Chinese police by surprise. Twenty-five members of a gang of Cambridge United football hooli- gans who wore Pringle jerseys and nearly killed a Chelsea supporter were sent to prison, with sentences of up to five years. Martchester United beat Everton in the FA Cup Final. A hunter outside the New Zealand town of Te Puke had his glasses broken, and was given a broken nose by a wild duck which dived beak first into his

face. The duck was killed. ACO