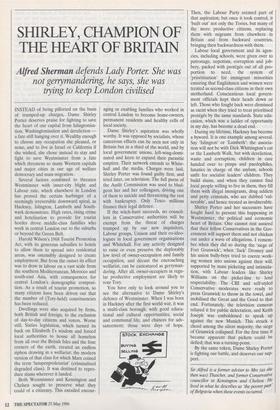 SHIRLEY, CHAMPION OF THE HEART OF BRITAIN

not gerrymandering, he says, she was trying to keep London civilised

INSTEAD of being pilloried on the basis of trumped-up charges, Dame Shirley Porter deserves praise for fighting to save the heart of our capital from Islingtonisa- tion, Washingtonisation and dereliction — a fate still hanging over it. Wealthy enough to choose any occupation she pleased, or none, and to live in Israel or California if she wished, she chose instead to stay and fight to save Westminster from a fate which threatens so many Western capitals and major cities in our age of welfare democracy and mass migration.

Several factors combined to threaten Westminster with inner-city blight and Labour rule, which elsewhere in London has proved the certain harbinger of a seemingly irreversible downward spiral, as Hackney, Islington, Lambeth and South- wark demonstrate. High rates, rising crime and hotelisation to provide for tourist hordes drove middle-class families who work in central London out to the suburbs or beyond the Green Belt.

Harold Wilson's 1968 Tourist Promotion Act, with its generous subsidies to hotels to allow them to spread into residential areas, was ostensibly designed to create employment. But from the outset its effect was to draw in labour on a vast scale from the southern Mediterranean, Morocco and south-east Asia, with consequences for central London's demographic composi- tion. As a result of tourist promotion, so many citizens have been driven out that the number of (Tory-held) constituencies has been reduced.

Dwellings were also acquired by firms, both British and foreign, to the exclusion of day-to-day citizens and voters. Worse still, Sixties legislation, which turned its back on Elizabeth I's wisdom and forced local authorities to house all homeless from all over the British Isles and the four corners of the earth, created an endless siphon drawing in a welfariat: the modern version of that class for which Marx coined the term lumpenproletariat' (criminalised degraded class). It was destined to repro- duce slums wherever it landed.

Both Westminster and Kensington and Chelsea sought to preserve what they could of a citizenry. This entailed encour- aging or enabling families who worked in central London to become home-owners, permanent residents and healthy cells of local society.

Dame Shirley's aspiration was wholly worthy. It was opposed by socialists, whose cancerous effects can be seen not only in Britain but in a third of the world, and by local government unions, left-wing-domi- nated and keen to expand their parasitic empires. Their network extends to White- hall and the media. Charges were laid. Shirley Porter was found guilty first, and tried later, on television. The full purse of the Audit Commission was used to blud- geon her and her colleagues, driving one of them to suicide and threatening the rest with bankruptcy. Only Tesco millions finance their legal defence.

If the witch-hunt succeeds, no council- lors in Conservative authorities will be exempt from the threat of charges trumped up by our new inquisitors, Labour groups, Unison and their co-ideo- logues in local government organisations and Whitehall. For any activity designed to raise or even preserve the deplorably low level of owner-occupation and family occupation, and decant the encroaching welfariat, can be caricatured as gerryman- dering. After all, owner-occupiers in regu- lar productive employment are likely to vote Tory.

You have only to look around you to see the alternative to Dame Shirley's defence of Westminster. When I was born in Hackney after the first world war, it was a multi-class borough, with good educa- tional and cultural opportunities, social and communal life, and chances for adv- sancement; those were days of hope. Then, the Labour Party seemed part of that aspiration; but once it took control, it 'built out' not only the Tories, but many of the more productive citizens, replacing them with migrants from elsewhere in Britain and from backward countries, bringing their backwardness with them.

Labour local government and its agen- cies, including schools, were given over to patronage, nepotism, corruption and job- bery, packed with protégés out of all pro- portion to need, the system of 'prioritisation' for immigrant minorities ensuring that Englishmen and women were treated as second-class citizens in their own motherland. Conscientious local govern- ment officials kept their heads down or left. Those who fought back were dismissed as racist when they tried to treat prioritised protégés by the same standards. State edu- cation, which was a ladder of opportunity in my day, has become a dead end.

During my lifetime, Hackney has become a byword. It is one example among several. Say 'Islington' or 'Lambeth': the associa- tion will not be with Dick Whittington's cat or the Lambeth Walk, but with dereliction, waste and corruption, children in care handed over to pimps and paedophiles, lunatics in charge of the asylum, schools unfit for socialist leaders' children. They build slums, and when they cannot find local people willing to live in them, they fill them with illegal immigrants, drug addicts and petty criminals, who are dubbed 'vul- nerable', and hence treated as invulnerable.

Shirley Porter and her successors have fought hard to prevent this happening in Westminster, the political and economic heart of Britain. One cannot rest assured that their fellow Conservatives in the Gov- ernment will support them and not chicken out under a wave of allegations. I remem- ber when they did so during the 'siege of Fort Grunwick', when 'Jack' Dromey and his union bully-boys tried to coerce work- ing women into unions against their will, supported by mass picketing and intimida- tion, with Labour leaders like Shirley Williams on the picket-line to lend respectability. The CBI and self-styled Conservative moderates were ready to press Grunwick to throw in the towel, and mobilised the Great and the Good to that end. Fortunately, the television cameras relayed it for public delectation, and Keith Joseph was emboldened to speak up against the new Munich. This struck a chord among the silent majority; the siege of Grunwick collapsed. For the first time it became apparent that pickets could he defied; that was a turning-point.

By the same token, Dame Shirley Porter is fighting our battle, and deserves our sup- port.

Sir Alfred is a former adviser to Mrs (as she then was) Thatcher, and former Conservative councillor in Kensington and Chelsea. He lived in what he describes as 'the poorer part of Belgravia when these events occurred.