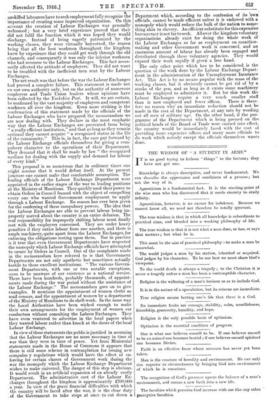 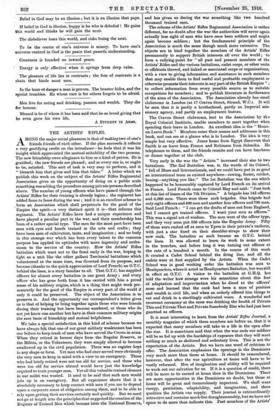 THE WISDOM OF "A STUDENT IN ARMS."

IT is no good trying to fathom "things" to the bottom; they have not got one.

Knowledge is always descriptive, and never fundamental. We can describe the appearance and conditions of a process ; but not the way of it.

Agnosticism is a fundamental fact. It is the starting point of the wise man who has discovered that it needs eternity to study infinity.

Agnosticism, however, is no excuse for indolence. Because we cannot know all, we need not therefore be totally ignorant.

The true wisdom is that in which all knowledge is subordinate to practical aims, and blended into a working philosophy of life.

The true wisdom is that it is not what a man does, or has, or says that matters ; but what he is.

This must be the aim of practical philosophy—to make a man be somewhat.

The world judges a man by his station, inherited or acquired. God judges by his character. To be our best we must share God's viewpoint.

To the world death is always a tragedy ; to the Christian it is never a tragedy unless a man has been a contemptible character.

Religion is the widening of a man's horizon so as to include God. It is in the nature of a speculation, but its returns are immediate. True religion means betting one's life that there is a God.

Religion is the only possible basis of optimism.

Optimism is the essential condition of progress.

Faith is an effective force whose measure has never yet been taken.

Man is the creature of heredity and environment. He can only rise superior to circumstances by bringing God into environment of which he is conscious.

The recognition of God's presence upsets the balance of a man's environment, and means a new birth into a new life.

The faculties which perceive God increase with use like any other perceptive faculties. Belief in God may be an illusion ; but it is an illusion that pays.

If belief in God is illusion, happy is he who is deluded ! He gains this world and thinks he will gain the next.

The disbeliever loses this world, and risks losing the next.

Greatness is founded on inward peace.

' Energy is only effective when it springs from deep calm.

The pleasure of life lies in contrasts ; the fear of contrasts is a chain that binds most men.

In the hour of danger a man is proven. The boaster hides, and the egotist trembles. He whose care is for others forgets to be afraid.

Men live for eating and drinking, passion and wealth. They die for honour.

Blessed is he of whom it has been said that he so loved giving that he even gave his own life.

A STUDENT IN ARMS.