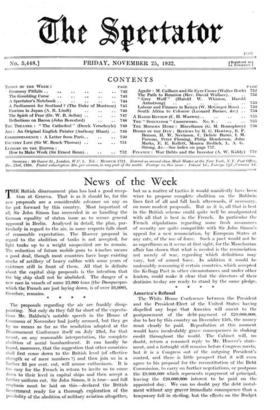 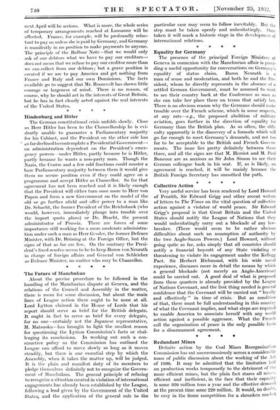 Page 1, 25 November 1932 — America's Refusal The White House Conference between the President and
Close

America's Refusal The White House Conference between the President and

the President-Elect of the United States having dispelled any hope that America will assent to the postponement of the debt-payment of £29,000,000, due to her by this country on December 15th, the money must clearly be paid. Repudiation at this moment would have incalculably grave consequences in shaking credit throughout the world. The Cabinet will, no doubt, return a reasoned reply to Mr. lIoover's state- ment, and a fortnight still remains before Congress meets, but it is a Congress out of the outgoing President's control, and there is little prospect that it will even agree to his proposal for the reconstitution of the Debt Commission, to carry on further negotiations, or postpone the £9,000,000 which represents repayment of principal, leaving the £20,000,000 interest to be paid on the appointed day. We can no doubt pay the debt instal- ment without any graver immediate consequence than a temporary fall in sterling,- but the effects- on the Budget next April will be serious. What is more, the whole series of temporary arrangements reached at Lausanne will be affected. France, for example, will be profoundly reluc- tant to pay us unless she is paid by Germany, and Germany is manifestly in no position to make payments to anyone. The principle of the Balfour Note—that we would only ask of our debtors what we have to pay our creditors— does not mean that we refuse to pay our creditor more than we can collect from our debtors; but a grave position is created if we are to pay America and get nothing from France and Italy and our own Dominions. The facts available go to suggest that Mr. Roosevelt has shown little courage or largeness of mind. There is no reason, of course, why he should act in the interests of Great Britain, but he has in fact clearly acted against the real interests of the United States.