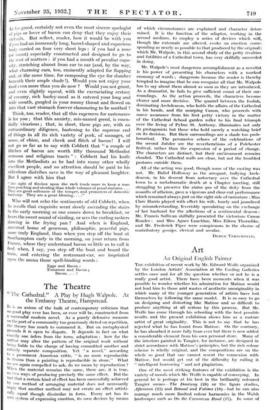 "The Cathedral." A Play by Hugh Walpole. At the Embassy Theatre, Hampstead.

IT is an axiom of the bulk of contemporary criticism that no good play ever has been, or ever will be, constructed from a successful modern novel. As a purely defensive measure on the part of a community too generously dieted on repetition, the theory has much to commend it. But on metaphysical grounds it is open to dispute. It depends in fact on what exactly one infers from the term, adaptation ; how far the author may alter the pattern of the original work without being liable to the charge of having committed another and entirely separate composition. Yet "a novel," according to a prominent American critic, "is no more reproducible in drama than a painting is reproducible in stone." What we are again compelled to ask, do we mean by reproduction ? Mien the material remains the same, there are, it is true, na two ways of producing precisely the same effect. But the fact that a certain kind of effect has been successfully achieved b3' one method of arranging material does not necessarily Imply that another method may not create an effect artisti- eal13' equal though dissimilar in form. Every art has its "11 system Of expressing emotion, its own devices by means

of which circumstances are explained and character deter- mined. It is the function of the adaptor, working in the second medium, to employ a series of devices which will, though the externals are altered, evoke an emotion corre- sponding as nearly as possible to that produced by the original: which Mr. Walpole, in this second study of the petty rivalries and futilities of a Cathedral town, has very skilfully succeeded in doing.

Mr. Walpole's most dangerous accomplishment as a novelist is his power of presenting his characters with a marked economy of words ; dangerous because the reader is thereby tempted to imagine that he can recognize all that Mr. Walpole has to say about them almost as soon as they are introduced. As a dramatist, he fails to give sufficient count of their sur- roundings. As the action proceeds, the characters become clearer and more decisive. The quarrel between the foolish, dominating Archdeacon, who holds the affairs of the Cathedral in his hands, and the usurping Canon, who proceeds with suave assurance from his first petty victory in the matter of the Cathedral School garden roller to his final triumph over the living of Pybus St. Anthony, illuminates not only its protagonists but those who hold merely a watching brief on its decision. But their surroundings are a shade too prob- lematical. The persuasive echoes of the celebrations of the second Jubilee are the reverberations of a Polchester festival, rather than the expression of a period of change. The characters are distinct, but their eaironment remains clouded. The Cathedral walls are clear, but not the troubled pastures outside them.

All of the acting was good, though some of the casting was not. Mr. Baliol Holloway as the arrogant, bullying Arch- deacon, in his descent from autocracy over the Cathedral town to a melodramatic death at a Chapter meeting, still struggling to preserve the status quo of the deity from the assaults of atheism, gave a vigorous and clear-cut performance which remained always just on the right side of caricature : Miss Clam Harris played with effect his wife, lonely and jaundiced by misunderstanding, feverishly speculating on the exchange of her husband for the affections of a sentimental deacon : Mr. Francis Sullivan skilfully presented the victorious Canon Bonder: and Miss Agnes Lauchlan, Miss Eileen Thorndike, and Mr. Frederick Piper were conspicuous in the chorus of contributory gossips, clerical and secular.