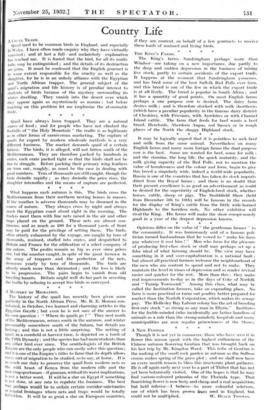 What happens each autumn is this. The birds cross the

Mediterranean from their northern nesting homes in masses. If the weather is adverse thousands may be drowned in the course of nature. They always cross by night and always reach the Egyptian coast about eight in the morning. The traders meet them, with fine nets raised in the air and other traps placed on the ground. These nets arc almost con- tinuous, and as much as /80 for a thousand yards of front may be paid for the privilege of setting them. The birds, often utterly exhausted by the voyage, are caught by tens of thousands, maimed, stuffed into crates, and despatched to Britain and France for the edification of a select company of fine eater's. The profits remain as big as ever since prices rise, but the number caught, in spite of the great increase in the army of trappers and the perfection of the nets, decreases yearly by tens of thousands. The birds are already much more than decimated ; and the loss is likely to be progressive. The pairs begin to vanish from old breeding haunts. Britain might well do her part in arresting the traffic by refusing to accept live birds so conveyed.